Military Wiki
Register
Don't have an account?
Sign In
Advertisement
in: Articles which use infobox templates with no data rows, Articles with hCards, Articles incorporating text from Wikipedia,
and 9 more

Edit
This article is about the army and air force rank. For the naval rank, see Captain (naval).

The army rank of captain (from the French capitaine) is a commissioned officer rank historically corresponding to command of a company of soldiers. The rank is also used by some air forces and marine forces. Today a captain is typically either the commander or second-in-command of a company or artillery battery (or United States Army cavalry troop or Commonwealth squadron). In the Chinese People's Liberation Army, a captain may also command a company, or be the second-in-command of a battalion.

In NATO countries the rank of captain is described by the code OF-2 and is one rank above an OF-1 (lieutenant or first lieutenant) and one below an OF-3 (major or commandant). The rank of captain is generally considered to be the highest rank a soldier can achieve while remaining in the field.

In some militaries such as United States Army and Air Force and the British Army, captain is the entry-level rank for officer candidates possessing a professional degree, namely medical professionals (doctors, nurses, pharmacists, dentists) and lawyers.

Prior to the professionalization of the armed services of European nations subsequent to the French Revolution, a captain was a nobleman who purchased the right to head a company from the previous holder of that right. He would in turn receive money from another nobleman to serve as his lieutenant. The funding to provide for the troops came from the monarch or his government; the captain had to be responsible for it. If he was not, or was otherwise court-martialed, he would be dismissed ("cashiered"), and the monarch would receive money from another nobleman to command the company. Otherwise, the only pension for the captain was selling the right to another nobleman when he was ready to retire.

In most countries the air force is the junior service and so air force ranks have been adopted or modified from one of the other services. Many, such as the United States Air Force, use a rank structure and insignia similar to those of the army.

In the unified system of the Canadian Forces the air force rank titles are identical to that of the army as are army and air rank insignia with both wearing two gold stripes on the sleeve or epaulette. While the rank is equivalent to a naval lieutenant, naval lieutenant rank insignia is embellished with the executive curl. The modern equivalent of the British group captain bears the rank and insignia of colonel, i.e. four gold stripes on sleeve or epaulette (same as a naval captain).

For further information, you may refer to Israel Defense Forces ranks.

In the Israel Defense Force (IDF), since 1948, סרן Seren is equivalent to a Captain (OF-2). Seren translates as "Captain" or "Military Commander". Typically it is the rank of a Company or Battery Commander. The rank above Captain is Rav seren (Rasan, Major). Note that the IDF uses this rank across all three of its services.

A variety of images illustrative of different forces' insignia for captain (or captain-equivalents) are shown below:

Капетан (Kapetan)
Army of the Republic of Macedonia 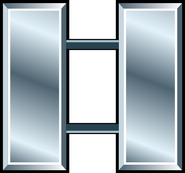 US Army, US Air Force and US Marine Corps.[2]