The Cessna A-37 Dragonfly, or Super Tweet, is a United States light attack aircraft developed from the T-37 Tweet basic trainer in the 1960s and 1970s. The A-37 was introduced during the Vietnam War and remained in peacetime service afterward.

The Air Force found the T-37 promising, but wanted an improved version of the aircraft that could carry a much larger payload, and had much greater endurance and better short-field performance. This meant a heavier aircraft with more powerful engines. In 1963, the Air Force awarded a contract to Cessna for two prototype YAT-37D aircraft: T-37s with modifications that included:

These changes meant a drastic increase in aircraft weight and the aircraft now had to carry a significant payload as well. Cessna, therefore, doubled the engine power by replacing the two Continental J-69 engines with General Electric J85-J2/5 turbojet engines with 2,400 lbf (10.7 kN) thrust each.

Test results were good, but USAF interest in counter-insurgency (COIN) aircraft had faded for the moment. The program went into limbo for a time, with the second prototype "put out to pasture" at the National Museum of the United States Air Force at Wright-Patterson Air Force Base in Ohio.

The war in Southeast Asia, however, continued to escalate. Losses of Douglas A-1 Skyraider close-support aircraft in US and South Vietnamese service proved greater than anticipated and USAF interest in COIN aircraft was revived. The YAT-37D seemed like a promising candidate for the job, but the Air Force felt that the only way to be sure was to evaluate the aircraft in combat.

As a result, the USAF issued a contract to Cessna for a pre-production batch of 39 YAT-37Ds, with a few minor changes relative to the prototypes, to be rebuilt from existing T-37Bs. These aircraft were initially designated AT-37D, but the designation was quickly changed to A-37A. The second prototype YAT-37D was pulled out of the Air Force Museum and upgraded to A-37A standards as part of the test program.

In combat "forward air control (FAC)" operations, the second seat was occupied by an observer. Only one crewman normally flew in the aircraft for close support missions, permitting a slight increase in ordnance.

During this period, the A-37As flew thousands of sorties. None were lost to enemy fire, although two were wrecked in landing accidents. The A-37A was formally named the "Dragonfly", but most pilots called it the "Super Tweet". The Combat Dragon program was successful, but unsurprisingly the combat evaluation revealed some of the deficiencies of the A-37A. The most noticeable problem was that the aircraft lacked range and endurance. Other concerns were heavy control response during attack runs (the flight controls were not power-boosted) and the vulnerability of the aircraft's non-redundant flight control system.

The USAF signed a contract with Cessna in early 1967 for an improved Super Tweet, designated the "A-37B". The initial order was for 57 aircraft, but this was quickly increased to 127. The A-37Bs were primarily intended to be supplied to the South Vietnamese Air Force (VNAF) as replacements for their Skyraiders. The A-37B prototype was rolled out in September 1967, with deliveries to the South Vietnamese beginning in 1968.

The A-37Bs were all newly built airframes. These were stronger than those of the A-37A, capable of pulling 6 g instead of 5, and were built to have a longer fatigue life of 4,000 hours. Field experience would demonstrate that 7,000 hours between overhauls could be tolerated.

The A-37B weighed almost twice as much as the T-37C. A remarkable fraction of the loaded weight, 5,800 lb (2,600 kg), could be external stores. In practice, the A-37B usually operated with at least two and sometimes four underwing fuel tanks to improve combat endurance.

To get this increased weight off the ground, the A-37B was fitted with General Electric J85-GE-17A engines, providing 2,850 lbf (12.7 kN) thrust each. These engines were canted slightly outward and downward to improve single-engine handling. Air commando pilots in Vietnam operating the A-37A had found single-engine cruise an effective means of improving their flight endurance.

Modifications were made to control surfaces to improve handling. To improve aircraft and crew survivability, the A-37B was fitted with redundant elevator control runs that were placed as far apart as possible. The ejection seats were armored, the cockpit was lined with nylon flak curtains, and foam-filled self-sealing fuel tanks were installed.

The A-37 excelled at close air support. Its straight wings allowed it to engage targets 100 miles per hour slower than swept-wing fighters. The slower speed improved bombing accuracy, enabling pilots to achieve an average accuracy of 45 feet.[2]

The A-37B added a refueling probe to the nose, leading to pipes wrapped around the lower lip of the canopy, for probe-and-drogue aerial refueling. This was an unusual fit for USAF aircraft, which traditionally are configured for boom refueling. Other improvements included updated avionics, a redesigned instrument panel to make the aircraft easier to fly from either seat, an automatic engine inlet de-icing system, and revised landing gear. Like its predecessors, the A-37B was not pressurized.

The A-37 required a relatively low amount of maintenance compared to contemporary fighters—only two hours of maintenance for each hour of flight time. This was partially due to multiple access panels in strategic locations.[3]

The 20 mm GPU-2/A and AMD 30 mm cannon pods were tested with favorable results on the A-37B,[4] but reports indicate that such pods were either seldom or never used in operation.

A total of 577 A-37Bs were built, with 254 delivered to the South Vietnamese Air Force. At war's end, the A-37 had flown over 160,000 combat sorties with only 22 USAF losses, approximately 187 A-37Bs were in South Vietnamese service when the country fell. Ninety-two were recovered by the US, while the other 95 were later used by the Communist Vietnamese in missions over Cambodia and during the China conflict in 1979. These "renegade" aircraft were phased out of service in the late 1970s or early 1980s, in all probability due to lack of spares. Some of the aircraft were shipped to Vietnam's allies like Czechoslovakia, Poland, the Soviet Union and East Germany. Others were sold to private foreign owners. Six examples of the A-37B became property of American warbird fans, while four A-37Bs are now privately owned in Australia and New Zealand.

After the war, the USAF passed their A-37Bs from the USAF Tactical Air Command (TAC) to TAC-gained units in the Air National Guard and Air Force Reserve. In the early 1980s these aircraft were assigned to the FAC (Forward Air Control) role and given the designation OA-37B. The OA-37Bs were eventually phased out and replaced in the FAC mission by the much more formidable Fairchild Republic A-10 Thunderbolt II in regular air force, Air National Guard and Air Force Reserve service.

A-37Bs were used extensively by the Salvadoran Air Force during the Salvadoran Civil War, supplied by the United States in 1983 as a replacement for the Salvadoran Air Force's Dassault Ouragans, several of which had been destroyed on the ground by the FMLN. A-37Bs were used to bomb rebel bases, columns, and towns (inflicting heavy civilian casualties in the city of Berlin), provided close air support, and flew interdiction missions. A total of 21 A-37Bs and 9 OA-37Bs were supplied during the war, one of which was shot down by an SA-7 missile on November 23, 1990 and another which lost a pilot to a Dragunov sniper rifle (on November 18, 1989).[6]

Nine A-37s remained in operational condition by the end of the war.[7]

The A-37B was also exported to Latin America, mostly during the 1970s. It was well suited to their needs because of its simplicity, low cost, and effectiveness for insurgent warfare. Most of the A-37Bs exported south had the refueling probe shortened to act as a single-point ground refueling probe, or deleted completely.

The Guatemalan Air Force flew the A-37 in extensive counter-insurgency operations throughout the 1970s-1990s, losing one aircraft in action in 1985.[8] It has also been widely used for counter-narcotics operations.[9]

On 23 March 2009, Embraer announced that it had reached agreement with the Ecuadorian air force to supply 24 turboprop-powered Embraer EMB 314 Super Tucanos, to replace Ecuador’s aging fleet of Vietnam-era Cessna A-37 Dragonfly strike aircraft.[10]

The A-37D also had more powerful engines, a centerline gun pod, and a single-seat configuration based on the TNT fuselage. As with the improved trainer concepts, the improved strike versions never flew. 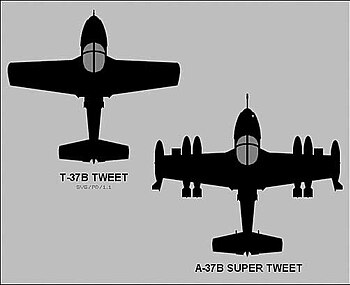 Data from The Encyclopedia of Modern Warplanes[1]