The Cessna T-37 Tweet[1] (designated Model 318 by Cessna[2]) is a small, economical twin-engine jet trainer-attack type aircraft which flew for decades as a primary trainer for the United States Air Force (USAF) and in the air forces of several other nations. The A-37 Dragonfly variant served in the light attack role during the Vietnam War and continues to serve in the air forces of several South American nations.

The T-37 served as the U.S. Air Force's primary pilot training vehicle for over 52 years after its first flight. After completing Primary in the Tweet, students moved on to other advanced Air Force, Navy, Marine Corps or Allied trainers. 1,269 Cessna T-37s were built, with 419 still serving in the United States Air Force in 2006. Between 2001 and 31 July 2009 the USAF phased out the T-37 in favor of the T-6 Texan II.[3]

In the spring of 1952 the United States Air Force (USAF) issued a request for proposals for a "Trainer Experimental (TX)" program, specifying a lightweight two-seat basic trainer for introducing USAF cadets to jet aircraft.

Cessna responded to the TX request with a twin-jet design with side-by-side seating. The USAF liked the Cessna design, which was given the company designation of "Model 318", and the side-by-side seating since it let the student and instructor interact more closely than with tandem seating. In the spring of 1954, the USAF awarded Cessna a contract for three prototypes of the Model 318, and a contract for a single static test aircraft. The Air Force designated the type as XT-37.

The XT-37 had a low straight wing, with the engines buried in the wing roots, a clamshell-type canopy hinged to open vertically to the rear, a control layout similar to that of contemporary operational USAF aircraft, ejection seats, and tricycle landing gear with a wide track of 4.3 m (14 ft). It first flew on October 12, 1954.[4]

The wide track and a steerable nosewheel made the aircraft easy to handle on the ground, and the short landing gear avoided the need for access ladders and service stands. The aircraft was designed to be simple to maintain, with more than a hundred access panels and doors. An experienced ground crew could change an engine in about a half hour.

The XT-37 was aerodynamically clean, so much so that an air brake was fitted behind the nosewheel door to help reduce speed for landing. Since the short landing gear placed the engine air intakes close to the ground, screens pivoted over the intakes from underneath when the landing gear was extended, to prevent foreign object damage.

The XT-37 was fitted with two Continental-Teledyne J69-T-9 turbojet engines, French Turbomeca Marboré engines built under license, with 920 lbf (4.1 kN) thrust each. The engines had thrust attenuators to allow them to remain spooled-up (i.e. rotating at speeds above idle) during landing approach, permitting shorter landings while still allowing the aircraft to easily make another "go-round" in case something went wrong. Empty weight of the XT-37 was 2.27 tonnes (5,000 lb).

The initial prototype crashed during spin tests. Later prototypes had new features to improve handling, including long strakes along the nose, and an extensively redesigned and enlarged tail. After these modifications the USAF found the aircraft acceptable to their needs, and ordered it into production as the T-37A. Production aircraft remained tricky in recovering from a spin; the recovery procedure was complex compared with most aircraft.

The production T-37A was similar to the XT-37 prototypes, except for minor changes to fix problems revealed by the flight test program. The first T-37A was completed in September 1955 and flew later that year.

The T-37A was very noisy, even by the standards of a jet aircraft. The intake of air into its small turbojets emitted a high-pitched shriek that led some to describe the trainer as a "Screaming Mimi", and it was referred to as the "6,000 pound dog whistle" or "Converter" (converts fuel and air into noise and smoke).[5][6] The piercing whistle quickly gave the T-37 its name: "Tweety Bird", or just "Tweet". The Air Force spent a lot of time and money sound-proofing buildings at bases where the T-37 was stationed, and ear protection remains mandatory for all personnel when near an operating aircraft.

The Air Force ordered 444 T-37As, with the last produced in 1959. During 1957, the US Army evaluated three T-37As for battlefield observation and other combat support roles, but eventually procured the Grumman OV-1 Mohawk instead.

The Air Force liked the T-37A, but considered it to be underpowered; consequently they ordered an improved version, the T-37B, with uprated J-69-T-25 engines. The new engines provided about 10% more thrust and were more reliable. Improved avionics were also specified for the new variant.

A total of 552 newly built T-37Bs were constructed through 1973. All surviving T-37As were eventually upgraded to the T-37B standard as well.

In 1962 Cessna suggested the T-37B as a replacement for the North American F-100 Super Sabre as the primary aircraft for the USAF aerobatic demonstration team, the Thunderbirds, but the USAF was satisfied with the F-100.

The T-37A and T-37B had no built-in armament and no stores pylons for external armament. In 1961 Cessna began developing a modest enhancement of the T-37 for use as a weapons trainer. The new variant, the T-37C, was intended for export and could be used for light attack duties if required.

The prototype T-37C was a modified T-37B. The primary changes included stronger wings, with a stores pylon under each wing outboard of the main landing gear well. The T-37C could also be fitted with wingtip fuel tanks, each with a capacity of 245 l (65 US gallons), that could be dropped in an emergency.

A computing gunsight and gun camera were added. The T-37C could also be fitted with a reconnaissance camera mounted inside the fuselage.

The primary armament of the T-37C was the General Electric "multi-purpose pod" with a 12.7 mm (0.50 caliber) machine gun with 200 rounds, two 70 mm (2.75 in) folding-fin rockets, and four practice bombs. Other stores, such as folding-fin rocket pods or Sidewinder air-to-air missiles, could be carried.

Cessna proposed a number of innovative variants of the Tweet that never went into production. In 1959, Cessna built a prototype of a light jet transport version of the T-37, designated the Cessna Model 407, which was stretched 61 cm (2 ft) to accommodate a four-place pressurized cockpit with an automobile-type configuration. Only a wooden mockup of the "Model 407" was constructed. The project was canceled due to insufficient customer interest.[7]

The company also proposed a similar four-place military light transport, the "Model 405", with a big clamshell canopy, but it was never built.

In response to a United States Navy "Tandem Navy Trainer" (TNT) requirement, Cessna proposed a T-37 with a modified fuselage featuring a tandem cockpit. The Navy selected the North American T-2 Buckeye instead.

Cessna proposed various other trainer derivatives for the US Navy and Air Force, including a vertical takeoff version based on the TNT configuration and incorporating lift-jet pods in the wings, but none of them got to the prototype stage.

The T-37A was delivered to the U.S. Air Force beginning in June 1956. The USAF began cadet training in the T-37A during 1957. The first T-37B was delivered in 1959. Instructors and students considered the T-37A a pleasant aircraft to fly. It handled well and was agile and responsive, though it was definitely not overpowered. It was capable of all traditional aerobatic maneuvers. Students intentionally placed the aircraft into a spin as part of their pilot training.

The Air Force made several attempts to replace the T-37 (including the T-46), but it remained in service with the USAF until it was phased out in favor of the Beechcraft T-6A Texan II between 2001 and 2009. The T-6 is a turboprop aircraft with more power, better fuel efficiency and more modern avionics than the Tweet.

The final USAF student training sortie by a T-37B aircraft in the Air Education and Training Command (AETC) took place on 17 June 2009. The last USAF operator of the T-37B, the 80th Flying Training Wing (80 FTW), flew the sortie from its home station at Sheppard AFB, Texas. The last T-37B was officially retired from active USAF service on 31 July 2009.[3]

T-37s, including both new-build and ex-USAF aircraft, were supplied to a number of countries, including:

Brazil
Brazilian Air Force - 65 T-37Cs, later passing 30 on to South Korea and 12 on to Paraguay, which were never delivered due to US veto.

Portugal
Portuguese Air Force - 30 T-37Cs. Some T-37Cs were used as the primary aircraft for the aerobatic demonstration team, the Asas de Portugal (Wings of Portugal) starting in 1977. 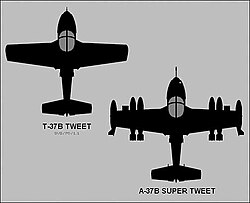