For the French civilian use of this facility, see Châteauroux-Déols "Marcel Dassault" Airport 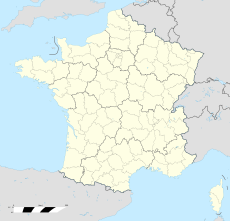 Châteauroux-Déols Air Base (IATA: CHR, ICAO: LFLX) is a former United States Air Force base in France. It is located in the Indre département of France, located about 3 miles (5 km) northeast of Châteauroux and about 1 mile (1.6 km) northeast of Déols on the east side of the Départemental 920 (D920) (Indre) road in Central France.

During the Cold War, Châteauroux-Déols was a front-line base for the United States Air Forces in Europe (USAFE). The USAF base at Châteauroux-Déols actually consisted of two separate facilities about five miles apart, Châteauroux-Déols Air Depot (CHAD) and La Martinerie Airdrome. The base was home to some 8,000 Americans between 1951 and 1967.

The site is currently home to the Châteauroux-Déols "Marcel Dassault" Airport.

The airport at Châteauroux started in the late 1920s as a civil transport airfield, providing regional air service within France. In 1935/36 Marcel Dassault built his first aircraft factory there, building Bloch bombers for the French Air Force. After the fall of France, the factory was used by the Luftwaffe for the production of sub-assemblies for various German aircraft.

What would become Châteauroux Air Base was bombed several times by the United States Army Air Forces and the RAF during World War II. After the war ended, the factory attempted to restart production for the French Air Force, but by 1950 it was closed.

La Martinerie was established in 1916 as a pilot training school for World War I aviators. Many American Army Air Service pilots were trained there. After the war, the facility was used by the French Air Force up until the Battle of France in May 1940. After the German Army retreated in 1944, the Free French Air Force used it as a bomber airfield, and after the war as a storage depot.

In 1950, the faciilty was offered to NATO to develop a depot and maintenance facility for the United States Air Force for joint use by the French and the Americans to support both civil and military aircraft. The final agreement was signed on 27 February 1951.

The Châteauroux-Déols Air Depot (CHAD) became the largest depot in Europe to support USAFE and other NATO air forces. The mission of CHAD was to:

The Châteauroux-Déols commercial airport and La Martinerie storage site had excellent highway connections to the seaports at Bordeaux and La Rochelle, and excellent railroad service. The Marcel Bloch aircraft factory was leased by USAFE for depot level aircraft maintenance. As CHAD was developed as a joint-use NATO facility, its focus was on depot-level maintenance, taking over from Erding Air Depot in West Germany and Burtonwood Air Depot in the United Kingdom. CHAD also provided the flying facilities for Central Air Material Area, Europe (CAMAE).

La Martinerie was developed into La Martinerie Air Depot, with its primary role being a logistics hub and Depot-level supply facility. La Martinerie handled all classes of USAF supplies, controlling six sub-depots dispersed throughout France which specialized in specific supply categories. It also was where the Headquarters and Administrative command facilities for CAMAE were located.

Châteauroux was the location of the first USAF unit to move to France. The initial contingent of USAF personnel arrived at Châteauroux on 10 January 1951 to get the facility up and operational as soon as possible. the 73rd Air Depot Wing was moved to Châteauroux from Kelly Air Force Base Texas in July. USAF reservists were being mobilized as part of the Korean War at the time, and about 1,500 personnel were mobilized and assigned to this depot wing. The wing began operations immediately as supply center for the new USAF bases in France, as considerable construction materials were required in their construction.

The Châteauroux Air Depot was established as USAFE's primary depot and was commanded directly by HQ USAFE at Wiesbaden West Germany until 31 December 1955. On 1 January 1956, Châteauroux was transferred to Air Material Command and it was renamed Central Air Material Area, Europe. CAMAE's mission was to procure supplies and parts, contracting services, and maintaining all USAF equipment.

In addition to the depot supply function for Europe, Châteauroux Air Depot managed the task of equipment maintenance and disposal for Europe. Aircraft depot level maintenance became a huge task, with thousands of American and NATO aircraft assigned to Europe. Originally manning was a combination of USAF personnel, American civilians and French employees, however the scope of the mission soon became apparent that a facility about six times the size of the Châteauroux facility would be needed to accommodate the work involved.

The resolution to this was to contract the workload within Western Europe, using the skilled civilian technicians of various airlines' workforce. KLM, SABENA, Air France, Air Italia, SAS, CASA, Fiat, Fairy, SNCNF-Marseilles, and SNCASO-Toulouse all provided IRAN (inspect and repair as necessary) services on USAFE & NATO aircraft. Châteauroux would perform contract administration, quality control, test flying and logistical support, while much of the actual work was performed remotely at various NATO civil facilities with CHAD and USAF representatives on-site to monitor performance and coordinate the logistical support needed from Châteauroux.

One of the unusual tasks at Châteauroux was the support of new aircraft procurement. Two fighters, peculiar to NATO and not flown by the USAF, were purchased with MDAP funds: 221 North American F-86Ks and 225 Dassault Mystere IV-As. The F-86Ks were produced by Fiat in Italy and Châteauroux managed the US government furnished equipment they required. F-86K Sabre interceptors were supplied to France, Italy, Netherlands, Norway, Turkey, and West Germany.

In addition to the main facility at Châteauroux, the 73rd Air Depot Wing operated several Sub-Depot facilities for supplies and equipment. These were located at Bordeaux for clothing and medical supplies; Niort(Chizé) for aircraft ammunition; Metz for vehicles and construction supplies; St. Mihiel for conventional ammunition storage; Moulins for vehicle storage and maintenance, and Villefranche for parts storage.

Activated at Châteauroux Air Base the unit operated EC-118 Command Post until the Squadron relocated to RAF Mildenhall, United Kingdom and reequipped with EC-135H aircraft.

On 7 March 1966, French President Charles De Gaulle announced that France would withdraw from NATO's integrated military structure. The United States was informed that it must remove its military forces from France by 1 April 1967.

The 73rd operated the depot until departure of all US forces from France, leaving Châteauroux Air Base on 20 March 1967.

After the USAF's departure in 1967, Châteauroux was developed into a commercial airport, business jet center and an aircraft overhaul facility. Most of the USAF presence has been erased by new construction and expansion of the facility, however a few old buildings remain being used for various non-military activities. Much effort and money has been invested in Châteauroux over the years since the departure of the Americans.

Retrieved from "https://military.wikia.org/wiki/Châteauroux-Déols_Air_Base?oldid=4423070"
Community content is available under CC-BY-SA unless otherwise noted.