Until the 1980s each of the branches of the Armed Forces had specific corps to undertake the tasks currently taken by the Common Corps. Due to operational reasons these corps were merged into the common corps that depend on the undersecretariat of the Ministry of Defence. In 1985 the Comptroller Corps were merged, in 1988 the Legal Corps were merged, and in 1989 the Medical and Bands Corps were merged. 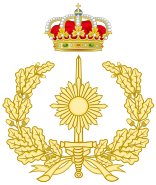