The Consolidated TBY Sea Wolf was a United States Navy torpedo bomber of World War II. A competitor and contemporary to the very similar Grumman TBF Avenger, the Sea Wolf was subject to substantial delays and never saw combat; only 180 of the type were built before cancellation after VJ Day.

The original design was not by Consolidated Aircraft, but rather by Vought, who designed the then XTBU-1 Sea Wolf to a 1939 US Navy requirement. The first prototype flew two weeks after Pearl Harbor. Its performance was deemed superior to the Avenger and the Navy placed an order for a 1,000 examples.[1]

Several unfortunate incidents intervened; the prototype was damaged in a rough arrested landing trial, and when repaired a month later was again damaged in a collision with a training aircraft. Once repaired again, the prototype was accepted by the Navy. However, by this time Vought was heavily over-committed to other contracts, especially for the F4U Corsair fighter, and had no production capacity. It was arranged that Consolidated-Vultee would produce the aircraft (as the TBY), but this had to wait until the new production facility in Allentown, Pennsylvania was complete, which took until late 1943.

The production TBYs were radar-equipped, with a radome under the right-hand wing. The first one flew on 20 August 1944. By this time, though, the Avenger equipped every torpedo squadron in the Navy, and there was no need for the Sea Wolf; in addition, numerous small problems delayed entry into service.[citation needed] Orders were cancelled after production started, and the 180 built were used for training.[2] 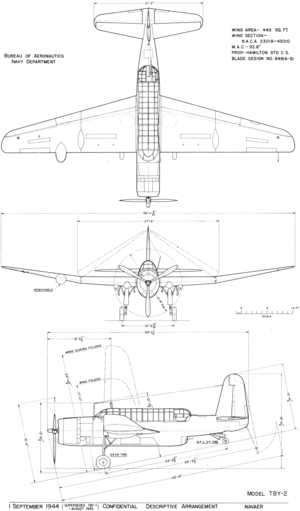