The Corpo de Fuzileiros Navais do Brasil (CFN or Brazilian Marine Corps) is a unit of Navy of Brazil.

Is present throughout the national territory, both on the coast, as well as in adjacent regions of Amazon and Pantanal, Acting in peacetime on the safety of the Navy and in helping the poor through social - civic actions regionally developed by Naval Districts . Abroad, ensures the security of the Brazilian embassies in Algeria, Paraguay, Haiti and Bolivia. Participated in every armed conflict of History of Brazil.

The CFN is originally from the former Brigade Royal Navy, military unit established by Royal Charter of Maria I of Portugal in 1797. In the context of Peninsular War when the First French Invasion (1807), The unit moved to Royal Family for Brazil, Having landed in the city of Rio de Janeiro in March 7 of 1808.

Baptism of fire: the conquest of Cayenne[edit | edit source]

In retaliation for the invasion of mainland Portugal, the Prince Regent John ordered the invasion of French Guiana, Whose capital, Cayenne It was conquered by forces of detachment and Portuguese Army the January 12 of 1809. Two days later, 14, was flown to Portuguese Royal Flag, was solemnized this act with a salvo of twenty-one shots artillery.

Subsequently, the unit was involved in several campaigns, including:

In the latter, distinguished himself in action in Battle of Riachuelo and in the episode known as passage Humaitá.

The performance at the UN[edit | edit source]

The CFN has distinguished itself in the participation in humanitarian actions promoted by United Nations (UN), in theaters of operation as diverse as El Salvador, Bosnia, Honduras, Mozambique, Rwanda, Angola, Peru, Ecuador, Timor-Leste And recently in Haiti (MINUSTAH).

Trained as " Ready Force Performance ", the CFN has currently about 15 000 men, all volunteers and public employees . Professionals in combat on land, air and sea, having as the main unit The Special Operations Battalion of Marines The mission of the CFN is to ensure the projection of naval power ashore through the landings made in conjunction with Navy ships and troops . In Brazil, this is a complex task, since the country's territory comprises about 8.5 million km ², with a coastline of over 7400 km with dozens of oceanic islands, and a navigable river network of approximately 50,000 km extension. In the latter we understand the Brazilian Amazon. Cover climates and landscapes as varied as the pampas of Rio Grande do Sul, of the Pantanal in Mato

Grosso do Sul, the caatinga in the Northeast and the Amazon jungle, requiring a higher standard of training, agility and versatility. Thus, there are units trained in demolition techniques, special actions, parachuting, combat in jungles, mountains and ice, and actions helitransportadas .

To fulfill their missions, the Marines are landed by amphibious vehicles or helicopters. For this count with the support of naval fire and / or naval . Once on land, operate their own facilities, which include armored field artillery, anti-aircraft artillery, combat engineering, Communications and electronic warfare.

The motto of the Marine Corps is "ADSUMUS" expression Latin that in Portuguese means "Aqui Estamos", meaning in English "Here we are!" 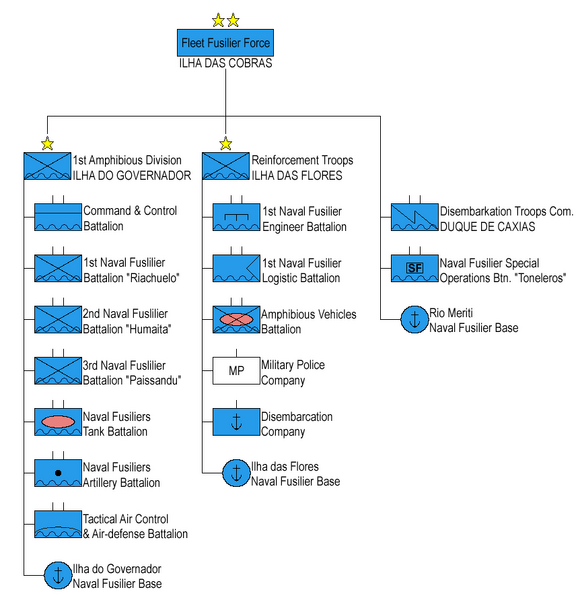 Retrieved from "https://military.wikia.org/wiki/Corpo_de_Fuzileiros_Navais_do_Brazil?oldid=1112707"
Community content is available under CC-BY-SA unless otherwise noted.