A distinctive unit insignia (DUI) is a metal heraldic device worn by soldiers in the United States Army. The DUI design is derived from the coat of arms authorized for a unit. DUIs may also be called "distinctive insignia" (DI), a "crest" or a "unit crest" by soldiers or collectors. The term "crest" however, in addition to being incorrect, may be misleading, as a DUI is an insignia in its own right rather than a heraldic crest. The term "crest" properly refers to the portion of an achievement of arms which stands atop the helmet over the shield of arms. (Nevertheless, a minority of DUIs happen to depict crests, such as those of many National Guard state area commands.) The U.S. Army Institute of Heraldry is responsible for the design, development and authorization of all DUIs.

Pre-World War I Insignia. Distinctive ornamentation of a design desired by the organization was authorized for wear on the Mess Jacket uniform by designated organizations (staff corps, departments, corps of artillery, and infantry and cavalry regiments) per General Order 132 dated December 31, 1902. The distinctive ornamentation was described later as coats of arms, pins and devices. The authority continued until omitted in the Army uniform regulation dated December 26, 1911.

Distinctive unit insignia. Circular 161 dated 29 April 1920 authorized the use of the regimental coat of arms or badge as approved by the War Department for wear on the collar of the white uniform and the lapels of the mess jacket. Circular 244, 1921 states: "It has been approved, in principle, that regiments of the Regular Army and National Guard may wear distinctive badges or trimmings on their uniforms as a means of promoting esprit de corps and keeping alive historical traditions. Various organizations which carry colors or standards have generally submitted coats of arms having certain historical significance. As fast as approved these coats of arms will for the basis for regimental colors or standards which will eventually replace the present regimental colors or standards when these wear out. The use of these coats of arms as collar ornaments in lieu of the insignia of corps, departments, or arms of service would be an example of distinctive badge to be worn by the regiment." `The first unit to wear this insignia was the 51st Artillery which received approval for wear on March 18, 1922. It was designed by Master Gunner and Master Sergeant Edward C. Kuhn, the artist responsible for creating all authorized coats of arms and distinctive unit insignia at the time.

The unit commanding officer requests approval of a distinctive unit insignia. A check is made by the Institute of Heraldry to determine the availability of a current copy of the lineage and honor statement and/or history for the unit. If such is not available, one is requested from the United States Army Center of Military History. The unit's history is reviewed to determine if the unit may inherit a previously approved distinctive unit insignia or if a new design should be made.[1]

If a new design is to be made, careful study is made of the history and battle honors of the unit. The most important decorations, honors, combat service and missions are represented in the design of the insignia. Sometimes two centuries of history are condensed into symbolism for distinctive unit insignia.

A proposed design is created and sent to the commanding officer for review and concurrence. Upon concurrence by the unit commander an official letter of approval of the distinctive unit insignia is sent to the unit.

The shield shape design is used to identify color bearing organizations (for example, regiments and battalions). Other design patterns will be used for non-color bearing units. The design is based on war service, assignment or accomplishments. Cartoon characters or logos are not authorized as design elements. Symbols are to represent mission rather than actual equipment as equipment becomes out-of-date. Unit designations, numerals, letters, geographical outlines, reproductions of other insignia will not be included as part of the design.

Once a distinctive unit insignia is approved it is changed only when a heraldic or historical error is found. A modification of unit designation or mission does not permit a change to the DUI design. As a result, DUIs tend to further reflect the historic roots of a unit. For example, many older Military Intelligence battalions' DUIs feature teal blue rather than oriental blue, having been designed for Army Security Agency units which were designated as branch-immaterial. Likewise, those that began as Signals units typically feature orange. Color-bearing battalions and regiments continue to have insignia without the shield shape if they were formerly non-color-bearing units when the insignia was approved; this includes not only former groups and brigades that were down-sized, but as well flexible battalions (i.e., battalions composed of variable attached numbered companies, rather than fixed-TOE battalions composed of lettered companies which are organic to the battalion) which gained coats of arms and thus colors in the late 1990s, long after their DUIs were already approved.

The distinctive unit insignia of the unit to which the soldier is assigned are worn as follows:

By whom worn[edit | edit source]

When a DUI is authorized, all personnel assigned to the organization wear the insignia, except general officers, the Sergeant Major of the Army and the Senior Enlisted Advisor to the Chairman. General officers wear their Regimental Distinctive Insignia (RDI) on the black pullover sweater. The Sergeant Major of the Army and Senior Enlisted Advisor to the Chairman (if a soldier) wear, respectively, the SMA and SEAC collar insignia in lieu of the DUI on their pullover sweaters, garrison caps and berets, but their epaulets are bare. Reserve component units with WARTRACE alignments may wear the DUI of the Active unit to which they are aligned, in lieu of their peacetime DUI, provided major RSC or state TAG, and MACOM commanders agree on such wear. When personnel transfer to a new organization they wear the DUI of their new unit. 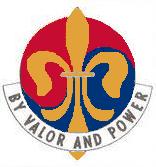 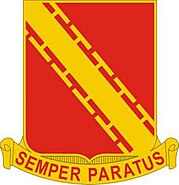 71st ADA Regiment
"Undique Venimus"
(We come from all parts) 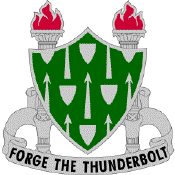 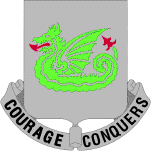 66th Armor Regiment
"Semper in Hostes"
(Always into the enemy) 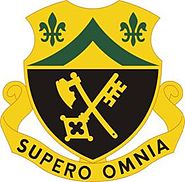 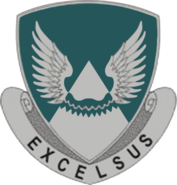 227th Aviation Regiment
"Pouvoir"
Add a photo to this gallery 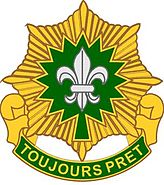 9th Cavalry Regiment
"We Can, We Will"

13th Cavalry Regiment
"It Shall Be Done"

15th Cavalry Regiment
"Tous Pour Un, Un Pour Tous"
(All for one, one for all)

26th Cavalry Regiment
"Our strength is in loyalty"

101st Cavalry Regiment
"To the Utmost

108th Cavalry Regiment
"Come What Will" 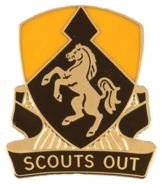 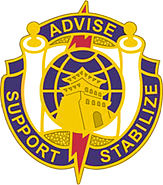 864th Engineer Battalion
"Pacemakers"
Add a photo to this gallery 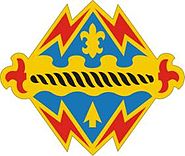 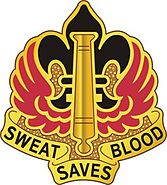 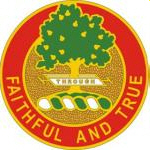 82nd Field Artillery Regiment
"Can and Will" 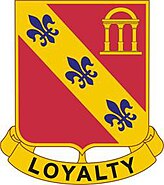 2nd Infantry Regiment
"Noli Me Tangere"
(Do Not Touch Me)

4th Infantry Regiment
"Noli Me Tangere"
(Don't Tread on Me) 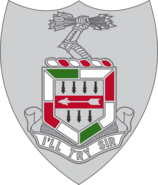 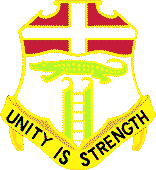 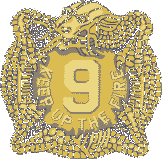 14th Infantry Regiment
"The Right of the Line"

15th Infantry Regiment
"Can Do" 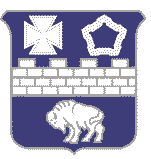 18th Infantry Regiment
"In Omnia Paratus"
(Prepared For All Things) 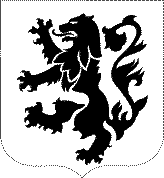 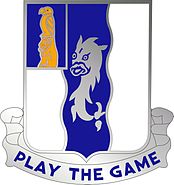 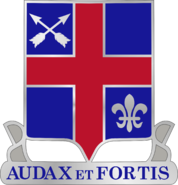 134th Infantry Regiment
"Lah We Lah His"
(The Strong, The Brave) 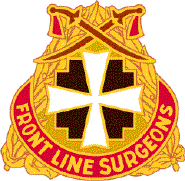 Womack Army Medical Center
Add a photo to this gallery

728th Military Police Battalion
"In Peace as in War" 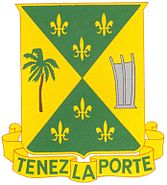 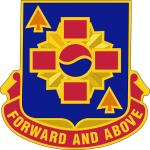 640th Support Battalion
"Forward and Above" 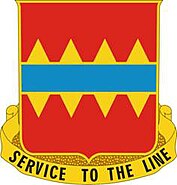 Retrieved from "https://military.wikia.org/wiki/Distinctive_unit_insignia?oldid=2240068"
Community content is available under CC-BY-SA unless otherwise noted.