A draisine is a light auxiliary rail vehicle, driven by service personnel, equipped to transport crew and material necessary for the maintenance of railway infrastructure.

The eponymous term is derived from German Baron Karl Christian Ludwig Drais von Sauerbronn, who invented his Laufmaschine (German for "running machine") in 1817, that was called Draisine (German) or Draisienne (French) by the press. It is the first reliable claim for a practically used bicycle, basically the first commercially successful two-wheeled, steerable, human-propelled machine commonly called a velocipede, nicknamed hobby-horse or dandy horse.[1]

Later, the name draisine came to be applied only to versions used on rails and was extended to similar vehicles, even when not human-powered. Because of their low weight and small size, they can be put on and taken off the rails at any place, allowing trains to pass.

In the United States, motor-powered draisines are known as speeders while human-powered ones are referred as handcars. Vehicles that can be driven on both the highway and the rail line are called hy-rails, or more properly, road-rail vehicles.

Draisine is spelled dressin in Sweden and dresin in Norway and dræsine in Denmark. In Finland the word is "resiina". Usually, dressin refers to pedal-powered rail-cycles which were used by railroad maintenance workers in Finland, Sweden and Norway until about 1950, as handcars were elsewhere.

Now draisines are used for recreation on several unused railway lines in Germany, Sweden, Norway, Poland and some other European countries. There are several companies renting draisines in Sweden.[2] In Finland there has been annual competition "Resiina-ralli" (translates "Draisine Rally"), which involves several draisine teams travelling many days on the railways from one corner of the country to another. The rally is televised and is popular with TV-viewers. 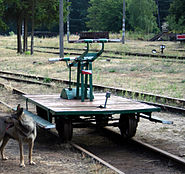 Three-wheeled handcar designed to be operated by a single person, widely known in United States as a handcar or velocipede

A row of draisines for hire. The railway runs between Broby and Glimminge, Sweden

Railcar is another term used for small motorized draisines

Car (Russian GAZ-13 Chaika) converted into a draisine, at the Hungarian Railway Museum

Deutsche Bundesbahn draisine based on the Volkswagen Type 2

Prior to WW2 the Japanese Empire had already made extensive use of draisines such as the Sumida M.2593 in Manchuria and the Sino-Japanese war.

People have been putting bicycles on railroad tracks ever since there have been both bicycles and railroads. From time to time, factory-built models have been available, beginning with a device marketed in 1908 through the Sears catalogue for just $5.45.

With the conversion of regular bicycles into railbikes a great project for do-it-yourselfers, there are many designs available, though no one design can lay claim to absolute superiority; as with cars and airplanes, each design has its advantages and disadvantages. However, certain fundamentals of railbike design must be adhered to, foremost among them the reconciliation of a bicycle’s stability with adaptation to riding on a track: bicycles are kept upright by the rider steering in the direction of an impending fall, but this ability is sacrificed when the bicycle is constrained by rails. Simply adding flanged wheels to a conventional bicycle would result in the rider performing a circus act on a tightrope, so the typical approach to stabilization is to add an outrigger, with roller(s), across to the second rail from near the bicycle’s rear wheel. Even such an outrigger system is not without its complications, as tracks that are no longer perfectly parallel —common on sections of abandoned track— can result in derailment. Additional guide rollers can help alleviate this problem at the expense of greater weight.

Aside from this outrigger, necessary modifications include flanged guide rollers on both the front and rear wheels, with the front guide needing to carry a large part of the rider’s weight in order to prevent derailment at encountering irregularities on the track. Practicality also commonly demands that the bicycle continue to be able to be ridden off rails, for the rider to travel (for instance) between his home and the tracks, and that the conversion process between bicycle and railbike be fast and straightforward even as it meets the demands of stability and dependability.

Retrieved from "https://military.wikia.org/wiki/Draisine?oldid=4989284"
Community content is available under CC-BY-SA unless otherwise noted.