Lua error in Module:Location_map at line 510: Unable to find the specified location map definition: "Module:Location map/data/France" does not exist. Dreux-Louvilliers Air Base is a former United States Air Force base. It is located in the Eure-et-Loir département of France, 18 miles (29 km) southwest of Dreux, and about one mile (1.6 km) west of Chennevieres; just to the west of the Départemental 20 (D20) (Eure-et-Loir) road.

During the Cold War, Dreux-Louvilliers was a front-line base for the United States Air Forces in Europe (USAFE). Sparingly used by USAFE and kept mostly in reserve status, it was used primarily as a tactical transport base for theater operations by the 60th Troop Carrier Wing in the late 1950s, and as a base for deployed Air National Guard tactical reconnaissance aircraft during the Berlin Crisis of 1961.

Today the base is closed, in reserve status by the French Air Force.

With the outbreak of the Cold War in the late 1940s, with the Berlin Airlift and the ongoing threat from the Soviet Union to western Europe, negotiations began in November 1950 between NATO and the United States to establish air bases and station combat wings in France to meet European defense needs.

During the negotiations for selection sites, the World War II airfield at Dreux was proposed for expansion into a modern air base. However, the French government rejected the airfield at Dreux, citing the expansion of Orly Airport near Paris presenting a conflict with airspace traffic, and plans were in the works to expand Vernouillet into a commercial site.

By the summer of 1951 another location near the village of Dampierre, about 3 miles (5 km) south of Brezolles was selected as a base to support the United States Air Force as a tactical airlift base. This location would become Dreux Air Base. Besides its active airlift and tactical reconnaissance role, Dreux Air Base also served as a Department of the Air Force High School. The school provided a residence (dormitory) high school for military family students from throughout Europe and Africa.

Construction of Dreux-Louvilliers Air Base began in September 1952 with the construction of roads and a railroad spur. In November, runway construction began along with various taxiways, hardstands and hangars.

The design of the airfield was to space parked aircraft as far apart as possible by the construction of a circular marguerite system of hardstands that could be revetted later with earth for added protection. Typically the margueriete consisted of fifteen to eighteen hardstands around a large central hangar. Each hardstand held one or two aircraft, and allowed the planes to be spaced approximately 150 feet (50 m) apart. Each squadron was assigned to a separate hangar/hardstand complex. This construction can be seen clearly in the satellite image link at the bottom of this article.

Building construction continued for the next several years, and by the summer of 1955 the base was ready for its American occupants.

The primary mission of the 60th was to transport U.S. Army and other NATO airborne and ground forces throughout Europe. The wing maintained its ability to drop airborne forces into a combat operation, but intra-theater airlift support became its primary mission. The majority of the missions were short-haul logistics support flights to support US and NATO forces such as transporting equipment and supplies between various air bases. Surface transportation in Europe was extremely slow, even a decade after the end of World War II. In addition losses and damage to surface transported goods was very common. High value supplies such as spare aircraft parts were such that the cost of airlifting them as well as personnel between weapons training ranges in Libya and Morocco and other locations was justified.

In addition, the 60th TCW supported the 62nd Troop Carrier Squadron from Sewart Air Force Base, Tennessee which was testing the dual basing concept of troop carrier aircraft. Another airlift unit, the 309th Troop Carrier Group arrived from Ardmore AFB, Oklahoma, to join the 60th TCW at Dreux on 1 June 1956. They flew the C-123Bs, providing logistical support to all USAFE bases, and to assist in improving dispersed base deployment concepts.

On 20 April 1958 USAFE decided that the C-123's were too expensive to operate in Europe and notified the 309th to return to the United States. The group returned to Ardmore AFB in July.

Most of the C-123's were returned to the states, being assigned to Air Force Reserve units.

In January 1961 budget reductions at HQ USAFE eliminated the 10th, 11th and 12th Troop Carrier Squadrons, with the units being inactivated in place along with all support units at Dreux. Support personnel were either assigned to the 317th Air Base Group or reassigned to other USAFE bases. Evreux AB became the caretaker of Dreux from 1 January 1958 until November 1961.

The 12th remained at Dreux until the Summer of 1962, when the squadron was inactivated and the aircraft either sold to the third world, or returned to the USA, where many served with reserve units or were mothballed. In 1968 six of the 12th C-119s were modified to AC-119K "Stinger" hunter/killer gunships and served with distinction in Vietnam.

From September 1958 though 1 November 1961 Dreux Air Base was classified as "standby", with all units assigned to the base coming under the command of the 7305th Combat Support Group and the 317th Air Base Group from Evreux. Although some C-119's still operated from Dreux, most operated from Evreux.

Manpower and budget shortages prevented adequate maintenance at Dreux and the condition of the base began to deteriorate after its inactivation. There were few flight operations from the base and the facility fell into a state of disrepair.

The Wing was activated to active duty on 1 October 1961 for a period of twelve months during the Berlin Crisis. This was the second tour of duty for the 117th in France, as it had opened Toul-Rosieres Air Base in January 1952. At the time of its activation, the 117th consisted of the 106th TRSquadron at Sumpter Smith Airport, Birmingham; the 153rd at Key Field, Meridian Mississippi; the 160th at Dannelly Field, Montgomery, and the 184th TRS at Fort Smith Municipal Airport Arkansas.

Due to budget restrictions, only one squadron, the 106th, was deployed to France. On 27 October twenty RF-84F's were deployed to Dreux, arriving on 3 November. In addition, two T-33As and one C-47 were deployed as support aircraft. By 22 November, the wing reassembled at the newly reactivated Dreux for an estimated stay of ten months. At Dreux, the unit was designated the 7117th Tactical Wing.

However, problems developed immediately after their arrival at Dreux. The base had been in standby status for about a year and no longer was used for operational flights. Possibly the French forgot to take into account the fact that the base could be re-opened for exercises and deployments such as was now the case.

In any event, the more than one thousand airmen of the 106th TRS arrived at a base that had been stripped clean. The French had taken away office desks, telephones and typewriters. The kitchens had not been used for some time, a fact that the quartermasters had not taken into account, so getting the base operational again in the short time available took an all-out effort.

A few days after the ground units arrived from Alabama, the first aircraft were prepared for a practice flight. The French, however, refused permission for take-off. Only after a lot of negotiation were several aircraft allowed to take to the air.

Dreux came within the Paris Air Traffic Control area, as did the busy Le Bourget and Orly airports, and an extra squadron of aircraft had not been allowed in the French air traffic controllers' staffing levels. The safety of civilian air traffic was used to justify denying the Americans permission to fly out of Dreux. Notwithstanding stormy protests, every form of co-operation was refused and the F-84s stayed on the ground. The pilots who had only just completed a risky Atlantic crossing of several thousand kilometers, had to wait in the operations room. In the United States, the Birmingham News daily newspaper reported that 'their boys', after the sudden mobilization and the weeks of preparation, had not been sent to Europe to sit around a French airfield doing nothing.

However strongly the Pentagon protested, the French answer remained 'non!' Eventually General Reid Doster, commander of the Alabama deployment could do little else but take his aircraft elsewhere. At the end of November 1961 he received permission from the traffic controllers to go with his aircraft to Chaumont AB on 8 December 1961, to fly but USAFE insisted that the 7117th Wing continue to operate at Dreux for airlift traffic.

On 22 July 1962 the 106th TRS returned to Alabama, and Dreux AB was placed back in standby status by USAFE.

Following the departure of the ANG units in 1962, the 322nd Air Division operated the base, assigning the 7305th Combat Support Group as the host unit at Dreux.

Dreux had no flying units assigned and no support aircraft, being occasionally used by transient C-119 and C-130's for training missions.

On 7 March 1966, French President Charles de Gaulle announced that France would withdraw from NATO's integrated military structure. The United States was informed that it must remove its military forces from France by 1 April 1967.

In May the removal of all American property began and was completed by November 1966. Dreux Air Base was returned to French control on 24 March 1967.

After the American return of the facility to the French, the base was shut down and put into care and maintenance status due to airspace conflicts with Orly Airport.

It is a secured facility, but is not used for any flight operations. The airfield is deteriorating after nearly 50 years of disuse, with the expansion joints beginning to separate between the poured concrete slabs. All of the dispersal margarettes remain, although some of the pads have been removed. All of the aircraft hangars remain intact, and in the support area some of the buildings appear to be in use for storage of supplies and equipment by the French Air Force. However, most of the base appears to be abandoned and overrun by vegetation, with several buildings missing roofs, exposing the interiors to the elements.

In 2011, this base was sold by French army to French electric company EDF (Electricité De France)for the photovoltaic installation of panels. 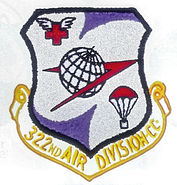 Retrieved from "https://military.wikia.org/wiki/Dreux-Louvilliers_Air_Base?oldid=4052554"
Community content is available under CC-BY-SA unless otherwise noted.