The French Air Force purchased its first drones in 1995, with a number of RQ-5 Hunter. The IAI Heron was put on display at the 1999 Paris Air Show and generated some interest; a project to field a derivative was started two years later. On 9 September 2006, a prototype was launched for trials from Istres-Le Tubé Air Base. Trials by the Centre d'essais en vol followed, before transfer of the plane to Mont-de-Marsan Air Base

The drone was originally planned to be delivered to the Air Force for the summer of 2003 as a replacement for the Hunters, which were phased out in September 2004. A number of industrial setbacks delayed the delivery, notably that the satellite communication system did not conform with Air Force requirements. The drones were modified to satisfy the requirements, changing them from an "off-the-shelf" product into a custom plane built specially for the French Air Force. The plane and onboard computer are built by Malat, a division of Israel Aerospace Industries, based on the IAI Heron.

The French Air Force ordered three planes and two ground control stations. The SIDM entered service in June 2008 in the Drone Experimentation Squadron 1/330 Adour, in Cognac, a unit of the Centre des expérimentations militaires. A four-phase programme took place between 2008 and 2009:

The Harfang is composed of two main components: the drone and the ground control station.

The Harfang drone is an unmanned airplane propelled by a rear-mounted turbo-supercharged water-cooled flat-four engine, driving a pusher propeller. It features a flapped high wing with anti-icing system, and has a twin boom tail with two vertical surfaces. With a take-off mass of 1.2 tonnes, the Harfang can carry a 250-kg payload to height of 7500 metres for a duration of 24 hours.

The mission pack is a three-sensor sphere stabilised by gyroscope, mounted under the forward part of the fuselage. It contains optronic and IR sensors, a laser designator that doubles as a rangefinder, and a high-resolution, fixed echo suppressing synthetic aperture radar. The radar can be used to observe vehicle movement on the ground under any meteorological condition. The antenna is mounted on the centre of the body.

The Harfang carries an Inertial measurement unit with GPS recalibration, and a differential GPS that provides for automatic take-off and landing capabilities. In case of loss of communications, the drone follows a path that brings it back to its start point, while trying to re-establish contact.

The drone carries an IFF transponder and a flight recorder. The Harfang lacks electromagnetic sensors and is wanting in terms of maneuverability. It is limited by bad weather, notably by icing or high humidity conditions.

Rear of the body 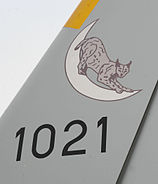 View of the engine

The control station is composed of four modules, numbered M1 through M4:

A line-of-sight link allows for direct communication up to 150 to 200 kilometres away. Longer ranges utilise a directional antenna and geostationary satellites. The Very High Frequency and Ultra high frequency communication relay provides for links to ground units and air traffic control.

In 2007, the Harfang was deployed in Lourdes to provide security for Pope Benedict XVI.[2]

In February 2009, the 3 Harfang were sent to Afghanistan and deployed at Bagram, under Lieutenant-colonel Cyril Carcy.[3] In late March or early April, drone number F-SDAY was damaged when it crashed due to freezing, and possibly to human or software error. Purchase of a fourth vehicle to replace F-SDAY is under consideration, while it is being repaired and redeployed in France for training.

In August 2011, Harfangs were deployed to the Libyan conflict.[4]

On June 5–6, 2013, Harfang UAVs carried out their 100th sortie during Operation Serval in Mali. Deployed since January 17, Harfangs flew 1,600 hours during the day and night.[6]