This article is about the east fort at Thiruvananthapuram. For the other East Fort, see East Fort, Thrissur. 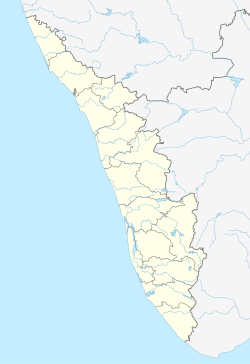 The East Fort is located at the heart of the CBD of Thiruvananthapuram city, the capital city of Kerala- a South Indian state.[1]

East Fort got its name from the eastern entrance to the fort built by the Kings of Travancore. The old city was all inside the fort on four sides with the Sri Padmanabha Swamy temple at the center. It is said that there were huge metal gates on this entrance to the Fort which was decorated with the symbol of a conch, which was the isignia of the Royal Family of Travancore.

East Fort or Kizhakke Kotta, as it is known in Malayalam, is today the heart of Thiruvananthapuram city. It is the central bus depot for the city bus services run by the state-run KSRTC. It is linked by MG Road to rest of downtown Thiruvananthapuram, and is the point of diversion to other parts of the city, as well as the famed Kovalam beach. The city's Central railway station, as well as the Central Bus Stand (for long distance buses) are both a few minute walk from East Fort, so are most of Thiruvananthapuram's cinemas, as well as top cultural venues and shopping malls.Sri Padmanabha Swami Temple, from which the city takes its name (Thiru Anantha Puram means 'the city or puram of Holy (Thiru) Anantha, another name for Vishnu, who is the deity of Sri Padmanabha Swamy Temple), is situated inside the East fort entrance.

Another important landmark is the 125 year old Attakulangara Government Central High School which was established in the year 1889 by the then social activist Marthandan Thampi during the reign of Ayilyam Tirunal situated near Gandhi park. This school is the Alma Mater of many famous persons who are scattered around the globe. On its list of former teachers are poet Ulloor S. Parameswara Iyer, former Chief Minister Pattom A. Thanu Pillai (chemistry), social reformer Sahodaran Ayyappan, former Chief Justice of erstwhile Travancore, U. Padmanabha Kukkiliya, Swami Vedachalam (Tamil), Marai Malai Adigal, and so on. Its alumni includes Subramanian who secured first rank in the SSLC in 1971 and also former Minister M.M. Hassan.

East Fort during the past few decades has transformed itself into one of the biggest commercial hubs of trivandrum with majority of Branded Jewellery showrooms like Alukkas,Alappat,Josco,Prince,Kalyan having their shops inside the fort premise.The 450 meters long street facing East FOrt and Padmanabha Swamy temple is the most expensive stretch of land in Trivandrum with most of the land being owned by Rajadhani Group and Ramachandran TExtiles group.There are temples devoted to Hanuman, Ganesh inside the east fort premise along with an Ashram started by Shri Abhedananda.The major landmarks include Govt offices like Taluk office, RTO office, Pattom Tanu Pillai Park, Sanskrit school, Attukal Shopping Complex, Saj Lucia, Karimpanal Arcade . There are many palaces within the fort premise like Kuthira malika, Ranga vilasom Palace which is now a photo gallery. There is also institutions like District Co operative bank, Vasu Deva Vialsom Vaidyasala along with all the above-mentioned places.

Kuthiramalika Palace museum, built by His Highness Swathi Thirunal Rama Varma, Maharaja of erstwhile Travancore is also situated inside the Fort complex and its remains.

Gandhi Park is situated in front of the fort, which is famous for hosting socio-politico gatherings. Gandhi Park has been completely remodelled with modern urban landscaping, and is a popular spot for a relaxing stroll or time-out. The Gandhi Park provides a maginificient view of the entrance to the East Fort which is lit up.The archeological department, cognizant of the great and long heritage of the East Fort, undertakes the maintenance and upkeep of the East Fort. It is a national monument and is flood lit in the evenings. The East Fort has it own Police Station and Post Office. This place of the city is said to be the very heart of Trivandrum and used to be the centre of Administration,arts,literature as Sri Bala Rama Varma was the patron of this city who himself was a virtuoso and a connoisseur at these fields.

The Ganesha temple, Pazhavangadi Ganapathi Temple, is also situated at the East Fort.

It is from the East Fort that one enters the Chalai Bazaar (Market), which was the main business center of Travancore. Gold, Flowers, Iron and Steel, Fruits and Vegetables to Cars and Computers, this is one spot where you get everything. The beauty of this place and its surroundings is so amazing that it is always swarmed by thousands of tourists daily. The place is so ancient that you can see houses of old era, agraharams - Brahmin homes, and lot more. One of the oldest market in the state Chala market is opposite to east fort and you can get anything under the sun from that market place. There is Putharikandom maithanam that hosts political rallies and speeches which also lies opposite to east fort and is alongside the KSRTC depot. Numerous cinemas like Padmanabha theater, Ajantha Theater, Sree bala, Kripa, SL Theater complex are also close by. All in all it is the ultimate Central Business hub of the capital city of Kerala with astounding real estate and heritage value

Retrieved from "https://military.wikia.org/wiki/East_Fort?oldid=4392608"
Community content is available under CC-BY-SA unless otherwise noted.