During World War I, the Eastern Front (sometimes called the "Second Fatherland War" in Russian sources)[4] was a theatre of operations that encompassed at its greatest extent the entire frontier between the Russian Empire and Romania on one side and the Austro-Hungarian Empire, Bulgaria and Germany on the other. It stretched from the Baltic Sea in the north to the Black Sea in the south, included most of Eastern Europe and stretched deep into Central Europe as well. The term contrasts with "Western Front". Despite the geographical separation, events in all the European theatres strongly influenced one another. In 1914, the Russians' invasion of Galicia relieved the pressure on the Serbian Front, and in 1916, the Brusilov Offensive was intended to do the same for the Italian Front. Ultimately, both times the Russians ignored the German forces to their north, which resulted in them over-stretching their supply lines, then suffering further defeats against superior German artillery.[5][6]

The front in the east was much longer than that in the west. The theatre of war was roughly delimited by the Baltic Sea in the west and Minsk in the east, and Saint Petersburg in the north and the Black Sea in the south, a distance of more than 1,600 kilometres (990 mi). This had a drastic effect on the nature of the warfare. While World War I on the Western Front developed into trench warfare, the battle lines on the Eastern Front were much more fluid and trenches never truly developed. This was because the greater length of the front ensured that the density of soldiers in the line was lower so the line was easier to break. Once broken, the sparse communication networks made it difficult for the defender to rush reinforcements to the rupture in the line, mounting rapid counteroffensives to seal off any breakthrough.

At the outbreak of the war, Tsar Nicholas II appointed his cousin, Grand Duke Nicholas, as Commander-in-Chief of the Imperial Russian Army. On mobilization, the Russian army totaled some 1.2 million men under arms, including 70 infantry [7] and 24 cavalry divisions with nearly 7,900 guns (7,100 field guns, 540 field howitzers, and 257 heavy guns).[citation needed]

The war in the east began with the Russian invasion of East Prussia in August 1914 and the Austro-Hungarian province of Galicia. The first effort quickly turned to a defeat following the Battle of Tannenberg in August 1914. The second incursion was completely successful, with the Russians controlling almost all of Galicia by the end of 1914. Under the command of Nikolai Ivanov and Aleksei Brusilov, the Russians won the Battle of Galicia in September and began the Siege of Przemyśl, the next fortress on the road towards Kraków.[citation needed]

This early Russian success in 1914 on the Austro-Russian border was a reason for concern to the Central Powers and caused considerable German forces to be transferred to the East to take pressure off the Austrians, leading to the creation of the new German Ninth Army. At the end of 1914, the main focus of the fighting shifted to central part of Russian Poland, west of the river Vistula. The October Battle of the Vistula River and the November Battle of Łódź brought little advancement for the Germans, but at least kept the Russians at a safe distance.[citation needed]

The Russian and Austro-Hungarian armies continued to clash in and near the Carpathian Mountains throughout the winter of 1914–1915. Przemysl fortress managed to hold out deep behind enemy lines throughout this period, with the Russians bypassing it in order to attack the Austro-Hungarian troops further to the west. They made some progress, crossing the Carpathians in February and March 1915, but then the Germans sent relief and stopped further Russian advance. In the meantime, Przemysl was almost entirely destroyed and the Siege of Przemysl ended in a defeat for the Austrians.[citation needed]

In 1915 the German command decided to make its main effort on the Eastern Front, and accordingly transferred considerable forces there. To eliminate the Russian threat the Central Powers began the campaign season of 1915 with the successful Gorlice-Tarnow Offensive in Galicia in May 1915.

After the Second Battle of the Masurian Lakes, the German and Austro-Hungarian troops in the Eastern Front functioned under a unified command. The offensive soon turned into a general advance and then a strategic retreat by the Russian army. The cause of the reverses suffered by the Russian army was not so much errors in the tactical sphere, as the deficiency in technical equipment, particularly in artillery and ammunition as well as the corruption and incompetence of the Russian officers. Only by 1916 did buildup of Russian war industries increase production of war material and improve the supply situation.

By mid-1915, the Russians had been expelled from Russian Poland and hence pushed hundreds of kilometers away from the borders of the Central Powers, removing the threat of Russian invasion of Germany or Austria-Hungary. At the end of 1915 German-Austrian advance was stopped on the line Riga–Jakobstadt–Dünaburg–Baranovichi–Pinsk–Dubno–Ternopil. The general outline of this front line did not change until the Russian collapse in 1917.

By June 1916 there were 140 Russian infantry divisions against 105 Austro-German infantry divisions and 40 Russian cavalry divisions against 22 Austro-German. The mobilization of industry and increase of imports enabled the Russian army to resume the offensive. A large attack on the southwestern front under the leadership of General Aleksey Brusilov (the Brusilov Offensive) started in June. The attack, aimed against the part of the front held by Austro-Hungarians, was initially a spectacular success. The Russian army advanced to a depth of 50–70 kilometres (31–43 mi), capturing several hundred thousand prisoners and several hundred guns. The arrival of important enemy reinforcements from the west, the defeat of the Romanians, and failure of Russia's western allies to shake German defenses, brought the Russian advance to an end in September.

On 27 August 1916, Romania entered the war on the side of the Entente and had a successful offensive until September. After that it started to suffer great losses and several defeats from German-Austrian-Bulgarian-Ottoman forces, as the Romanian Army was poorly equipped and their Russian allies offered little support on the front.

By 1917, the Russian economy finally neared collapse under the strain of the war effort. While the equipment of the Russian armies actually improved due to the expansion of the war industry, the food shortages in the major urban centres brought about civil unrest, which escalated into the February Revolution that forced the Tsar to abdicate. The large war casualties also created disaffection and mutinous attitudes in the army, which was fueled by Bolshevik agitators and the Russian Provisional Government’s new liberalization policies towards the army (stripping officers of their mandate by giving wide sweeping powers to "soldier committees", the abolition of the death penalty). The very last offensive undertaken by the Russian Army in the war was the brief and unsuccessful Kerensky Offensive in July 1917.

Throughout 1917 the German army remained largely on the defensive on the Eastern Front. The only major offensive operation was the seizure of Riga, one of the largest cities in the Russian Empire, in early September, followed by amphibious landings on Estonian islands in the course of Operation Albion during October. These operations brought German forces to within less than 500 km of the Russian capital in St. Petersburg, contributing to the chaotic political situation there.

On 7 November 1917, the Communist Bolsheviks took power under their leader Vladimir Lenin. Lenin’s new Bolshevik government tried to end the war, with a ceasefire being declared on December 15, 1917 along lines agreed in November. At the same time Bolsheviks launched a full-scale military offensive against its opponents (separatist governments of Ukraine and Don Region). During the peace negotiations between Soviets and Central Powers, the Germans demanded enormous concessions, eventually resulting in the failure of the long-drawn-out peace negotiations on February 17, 1918. At same time the Central Powers concluded military treaty with Ukraine which was losing ground in the fight with invading Bolshevik forces.

The war resumed with 52 German divisions crossing the November ceasefire line and a new offensive along the whole front. Encountering little resistance, the German army moved eastward along the Russian railways: in 124 hours they advanced 150 miles. The capital of Ukraine, Kiev, was captured on March 2 despite having been taken by the Bolsheviks only a month earlier.

With the German army just 85 miles (137 km) from the Russian capital Petrograd (St. Petersburg) on March 3, 1918, the Treaty of Brest-Litovsk was signed and the Eastern Front ceased to be a war zone. While the treaty was practically obsolete before the end of the year, it did provide some relief to the Bolsheviks, who were embroiled in a civil war, and affirmed the independence of Ukraine. However, Estonia, Latvia, Lithuania were intended to become a United Baltic Duchy to be ruled by German princes and German nobility as fiefdoms under the German Kaiser. Finland's sovereignity had been declared already in December 1917, and accepted by most nations, including France and the Soviet Union, but except the United Kingdom and the United States. The Germans were able to transfer substantial forces to the west in order to mount an offensive in France in the spring of 1918.[citation needed]

This offensive on the Western front failed to achieve a decisive breakthrough, and the arrival of more and more American units in Europe was sufficient to offset the German advantage. Even after the Russian collapse, about a million German soldiers remained tied up in the east until the end of the war, attempting to run a short-lived addition to the German Empire in Europe. In the end, Germany and Austria lost all their captured lands, and more, under various treaties (such as the Treaty of Versailles) signed after the armistice in 1918.[citation needed]

The Russian casualties in the First World War are difficult to estimate, due to the poor quality of available statistics. Some official Russian sources list 775,400 battlefield fatalities. More recent Russian estimates give 900,000 battlefield deaths and 400,000 dead from combat wounds, or a total of 1,300,000 dead. This is about equal to the casualties suffered by France and Austria-Hungary and about one-third less than those suffered by Germany.

When Russia withdrew from the war, 3,900,000[citation needed] Russian POWs were in German and Austrian hands. This by far exceeded the total number of prisoners of war (1,300,000) lost by the armies of Britain, France and Germany combined. Only the Austro-Hungarian Army, with 2,200,000 POWs, came even close. 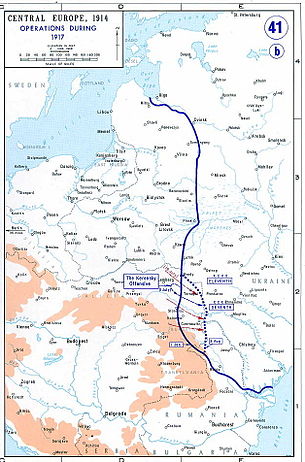 Territory lost by Russia under the 1918 Treaty of Brest-Litovsk

Retrieved from "https://military.wikia.org/wiki/Eastern_Front_(World_War_I)?oldid=4442500"
Community content is available under CC-BY-SA unless otherwise noted.