The Europaviertel (European quarter) in Wiesbaden is a former barracks area named Gersdorff Kaserne at the edge of the city center of the Hessian state capital.

Between 1868 and 1945, three different barracks, a military hospital and a laundry occupied the site of today's "European quarter".

After World War II, the area was occupied by the US Army and renamed Camp Lindsey (after Captain Darrell R. Lindsey). U.S. Air Forces Europe (USAFE), however, retained a small presence at Lindsey Air Station. Lindsey AS was established as an Army Air Force installation on 13 November 1946, and achieved its greatest prominence between December 1953 and 14 March 1973 when it was the host base for USAFE Headquarters.

All of the streets in "Camp Lindsey" were named for the 31 American fatalities from "Operation Victuals," the 1948-49 Berlin Airlift. From 1954 to 1973, Lindsey Air Station was, among other things, home to the 17th Air Force and the 65th Air Division.

Wiesbaden Army Airfield and Wiesbaden Army Medical Center were administered from Lindsey. After the transfer of Wiesbaden Air Base to the Army in 1976, Lindsey provided a home base for other support activities. One of these was the 7100 Consolidated Equipment Maintenance and Support (CEMS) Squadron (1990 - 1993), whose role was to consolidate all war readiness materials (WRM) management in the European theater. This group transferred its base of operation to Sembach Air Base upon the close of Lindsey. Support for various other Air Force units in the Wiesbaden area continued until it was closed in 1993. 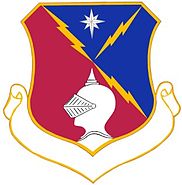 In 1993 Lindsey Air Station was returned to the Federal Republic of Germany and renamed Europaviertel. The buildings at Lindsey now house certain offices of the German Federal Investigation Bureau Bundeskriminalamt (red), the Hessen State Police (blue), a Folk high school (yellow), and new construction private housing (orange). The sports field and gym (green) is now the home of the Wiesbaden Phantoms