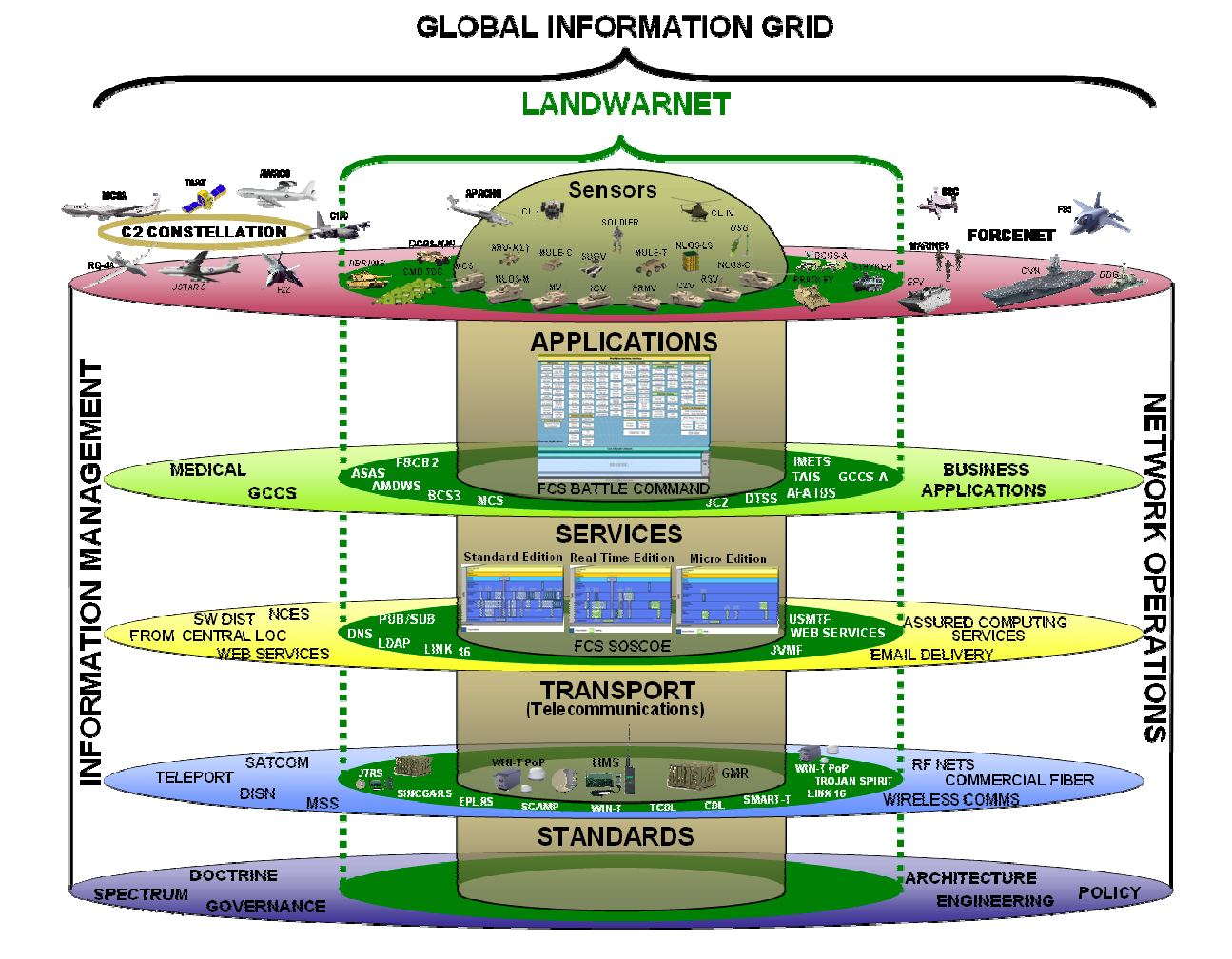 When fully adopted by the Army over the next two decades, the FCS (BCT) Network will possess the adaptability and management functionality required to maintain pertinent services, while the assigned FCS Brigade Combat Team fights on a rapidly shifting battlespace. The FCS (BCT) network will provide the FCS Family of Systems (FoS) the advantage to see first, understand first, act first, and finish decisively in the battlespace against both conventional and non-conventional enemy forces. The FCS (BCT) network will also dispatch targeting and other coordinating data to Navy and Air Force components for total force integration in the battlespace.

Sensors are the hardware and software that will provide FCS with the ability to "see first" and achieve situational awareness and understanding of the battlefield. Sensor layer allows soldiers to detect, identify, and track both enemy and friendly systems and to survey the terrain around them. The intelligence, surveillance and reconnaissance sensors will be integrated onto all manned and unmanned ground vehicles, and will be capable of accomplishing a variety of missions. The unmanned aerial vehicles will be able to maneuver to an area of attack and the onboard sensors will provide surveillance of targets and terrain, among other functions. In addition, FCS has two types of unattended ground sensor systems, Tactical-Unattended Ground Sensors (T-UGS) and Urban-Unattended Ground Sensors (U-UGS). T-UGS provide intelligence, surveillance, and reconnaissance awareness to the BCTs, while U-UGS support clearing operations in confined spaces or urban chokepoints. All sensors are connected to the Common Operational Picture. The Common Operational Picture (COP) gives the Soldier a good overview and understanding of their battlespace.

The applications layer is responsible for providing the integrated ability to assess, plan, and execute network-centric mission operations using a common interface. It consists of 10 software packages known as Battle Command applications. The combined capabilities of the Battle Command software packages enable full interaction among the FCS (BCTs), and provide the ability to understand the battle situation first. Understanding first is the ability to see the patterns, understand the enemy’s concept of operations, his scheme of maneuver, and then exploit his decisive points and vulnerabilities. The applications layer provides the ability for cross Battlefield Functional Area (BFA) problem solving and decision aiding capability for all brigades and below echelons.

The transport layer is the telecommunications layer. It provides the radios and computers to process information. It improves current force communication limitations because it is primarily embedded in the mobile platforms and moves with the combat formations. The transport layer provides ground, aerial, and space communications across the battlefield. It allows information to move seamlessly between FCS variants and Soldiers. The FCS communications network consists of a three tiered transport layer; terrestrial, airborne, and space. The terrestrial tier is based on the Joint Tactical Radio System (JTRS) Ground Mobile Radio (GMR) and Handheld, Manpackable, Small Form Factor (HMS) radios running two transformational waveforms, the Soldier Radio Waveform (SRW), and the Wideband Networking Waveform (WNW). Both radios will also run select legacy waveforms to provide current force and Joint interoperability.

The standards layer is the foundation of the FCS (BCT) network. This layer provides the governance for the implementation of the network (i.e. rules the soldier has to accommodate). It also describes how sensor data from non-FCS sources can be used by the FCS network. This ensures that FCS components will work together properly. Conformance to these standards permits seamless interoperability with combined and coalition forces for all National Security Systems (NSS) and Information Technology (IT) systems.

This article incorporates public domain material from websites or documents of the United States Army.

Retrieved from "https://military.wikia.org/wiki/FCS_Network?oldid=1102659"
Community content is available under CC-BY-SA unless otherwise noted.