Felix de Weldon was born in Vienna, Austria-Hungary on April 12, 1907. He received his early education at St. Egichin's Grammar School. In 1925, he earned an A.B. from Marchetti College,[1] a preparatory college.[2] From the University of Vienna's Academy of Creative Arts and School of Architecture, he earned his M.A. and M.S. degrees in 1927 and his PhD in 1929.

De Weldon first received notice as a sculptor at the age of 17, with his statue of Austrian educator and diplomat Professor Ludo Hartman.[1] In the 1920s, he joined artist's communes in France, Italy and Spain. De Weldon eventually moved to London, where he gained a number of commissions, among them a portrait sculpture of George V.

In 1950, President Harry Truman appointed de Weldon to the U.S. Commission of Fine Arts.[3] In 1956, he was re-appointed by President Dwight Eisenhower, and again in 1961 by President John F. Kennedy. In 1959, he received an honorary knighthood for his service to the British Crown. In 1951, De Weldon acquired the historic Beacon Rock estate in Newport, Rhode Island, where he lived until 1996 when he lost the property and most of his assets to financial hardship.

Felix de Weldon died on June 3, 2003 at the age of 96, in Woodstock, Virginia and was buried in Arlington National Cemetery. de Weldon is survived by his son Daniel DeWeldon. He was also the father of the late Byron deWeldon, who died June 6, 2017. Daniel is collaborating with Allen Nalasco on a biopic of his father's life titled "De Weldon - The Man Behind The Monuments". Daniel will play the part of Felix during the height of his career.

Approximately 1,200 de Weldon sculptures are located on seven continents. (A de Weldon monument of Richard Byrd is on McMurdo Sound, in Antarctica).

At the conclusion of the war in 1945, the Congress of the United States commissioned de Weldon to construct the statue for the Marine Corps War Memorial (called Iwo Jima Memorial) in the realist tradition, based upon the famous photograph of Joe Rosenthal, of the Associated Press agency, taken on February 23, 1945. De Weldon made sculptures from life of three (on June 23, 2016, John Bradley was not believed to be in the photo)[4] of the six servicemen raising the replacement United States flag on Mount Suribachi, on Iwo Jima. The other three flag-raisers who were killed in action (on June 23, 2016, Harold Schultz was identified as a flag-raiser in the photo and was not KIA) later on the island were sculpted from photographs. De Weldon took nine years to make the memorial which was dedicated on November 10, 1954, and was assisted by hundreds of other sculptors. The result is the 100-ton bronze statue which is on display in Arlington, Virginia.

De Weldon also contributed in creating Malaysia's Tugu Negara (National Monument) when the country's first Prime Minister, Tunku Abdul Rahman saw the Marine Corps War Memorial statue in his visit to America in October 1960 and personally met him for favour to design the monument. De Weldon was later conferred with the title Tan Sri, the Malaysian equivalent of a high-ranking knighthood. 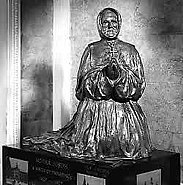 Felix de Weldon at the Marine Memorial dedication at Belleau Wood.
Add a photo to this gallery

Retrieved from "https://military.wikia.org/wiki/Felix_de_Weldon?oldid=5325477"
Community content is available under CC-BY-SA unless otherwise noted.