A firing pin or striker is part of the firing mechanism used in a firearm or explosive device e.g. an M14 landmine or bomb fuze. Firing pins may take many forms, though the types used in landmines, bombs, grenade fuzes or other single-use devices generally have a sharpened point. In contrast, firing pins used in firearms usually have a small, rounded portion designed to strike the primer of a cartridge, detonating the priming compound, which then ignites the propellant (inside) or fires the detonator and booster.[1][2][3]

A firing pin is a lightweight part, which serves to transfer energy from a spring-loaded hammer to the primer, while a striker is usually heavier, and is directly connected to the spring providing the energy to impact the primer. Striker mechanisms are generally simpler, since they combine the functions of hammer and firing pin in one.[1]

The firing pin or striker is generally located in the bolt of a repeating firearm. Firearms that do not have bolts, such as revolvers and many types of single-shot actions, generally have a very short firing pin in the frame, or else attached to the hammer itself. These types of firearms are almost never striker fired, as there is insufficient space to house a striker mechanism. Strikers are most commonly found in semi-automatic pistols and bolt action firearms.[1]

The typical firing pin is a small rod of steel, with the end that strikes the primer rounded into a hemispherical shape and hardened. The rounded end ensures the primer is indented rather than pierced, as would happen if the firing pin were sharply pointed. Most firing pins have a spring to push them out of contact with the primer, and often will have an integrated passive safety mechanism, such as a block that prevents them from moving forward unless the trigger is depressed, or a transfer bar, also trigger actuated, that must be in place to allow the hammer to depress the firing pin. This safety is in addition to any manually operated safety or safeties that act to block the trigger or hammer.[4]

Many firing pins are stamped from sheet steel, forming a rectangular cross-section rather than a round one. These will often have a cylindrical section at the front rather than a hemispherical one, and are fairly common in rimfire firearms. Sturm, Ruger, for example, uses sheet metal firing pins in its 10/22 carbine and Mark II pistol.

High performance firing pins are often made from lighter materials than steel, such as titanium. The lighter material increases the speed at which the firing pin travels, and reduces the lock time, or the time from trigger pull to the bullet leaving the barrel. See accurize for more information.

Mechanisms involving firing pins can be used also in other pyrotechnical systems, ranging from hand grenades to chemical oxygen generators. 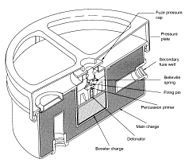 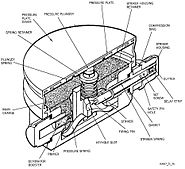 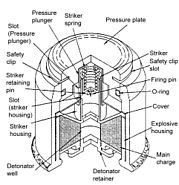 Military boobytrap firing device from USSR (normally connected to a tripwire) showing integral striker. The detonator on the end is inserted into a block of explosive e.g. Semtex 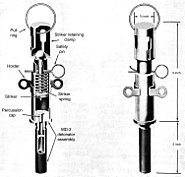 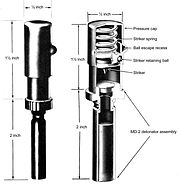 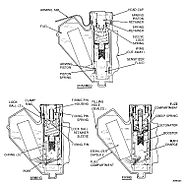 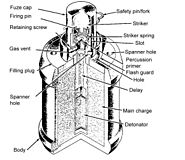 Cross-sectional view of a Japanese Type 99 grenade showing firing pin.
Add a photo to this gallery

Retrieved from "https://military.wikia.org/wiki/Firing_pin?oldid=4201053"
Community content is available under CC-BY-SA unless otherwise noted.