The United States Fleet Marine Force, Pacific (FMFPac) is the largest maritime landing force in the world. Its units are spread across the Pacific Ocean and reports to the United States Pacific Command. It is headquartered at MCB Camp H. M. Smith, HI and directs and commands all the subordinate elements of the Navy Expeditionary Strike Force and Marine Air-Ground Task Force components that follow under the 3rd, 5th, and 7th Fleet and the Marine Forces, Pacific (MarForPac). It is under operational control of the Commander, United States Pacific Fleet (ComPacFlt), when deployed.

FMFPac was established by General 'Howling Mad' Smith in 1944 to assume command of very large USMC forces in the Pacific, of the order of 500,000. 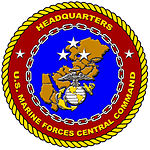 Retrieved from "https://military.wikia.org/wiki/Fleet_Marine_Force,_Pacific?oldid=4686555"
Community content is available under CC-BY-SA unless otherwise noted.