Flight sergeant (Flt Sgt, F/Sgt, or FS) is a senior non-commissioned rank in the British Royal Air Force and several other air forces which have adopted all or part of the RAF rank structure. It is equivalent to a staff sergeant in the British Army and has a NATO rank code of OR-7.

The rank was devised in the British Royal Flying Corps (RFC) in 1912 and passed to the Royal Air Force (RAF), on its formation in 1918. RFC flight sergeants wore a four-bladed propeller between the chevrons and the crown.

On 1 July 1946, aircrew flight sergeants were redesignated Aircrew I and replaced their chevrons with three six-pointed stars within a wreath and surmounted by an eagle and a crown. This proved unpopular however, and in 1950 they reverted to their old rank and badge, although Flight Sergeants Aircrew wear an eagle between chevrons and crown. Flight Sergeants in ground trades wear only a crown above the three chevrons.

Between 1950 and 1964, the rank of Chief Technician was equivalent to flight sergeant and was held instead of it by technicians, but now chief technician is a junior rank (still held only by technicians), although classified by NATO in the same grade.

In the RAF, Flight Sergeant ranks above Chief Technician and below Warrant Officer. The insignia for aircrew flight sergeants has an eagle in between the chevrons and the crown. 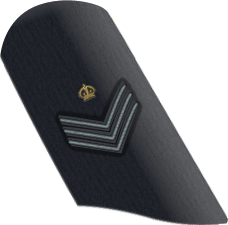 Flight Sergeant as it appears on Dress Uniform

Flight Sergeant is also used in many cadet organizations around the world, such as the Air Training Corps, Combined Cadet Force (RAF Section), the Australian Air Force Cadets and the Royal Canadian Air Cadets.

Retrieved from "https://military.wikia.org/wiki/Flight_sergeant?oldid=4284017"
Community content is available under CC-BY-SA unless otherwise noted.