A fortified church is a church that is built to play a defensive role in times of war. Such churches were specially designed to incorporate military features, such as thick walls, battlements and embrasures. Others, such as the Cathedral of Ávila were incorporated into the town wall. Monastic communities, such as Lérins Abbey, are often surrounded by a wall, and some churches, such as St Arbogast in Muttenz, Switzerland, have an outer wall as well. Churches with additional external defences such as curtain walls and wall towers are often referred to more specifically as fortress churches or Kirchenburgen (literally "church castles").

A high concentration of fortified churches may be found in parts of Europe where there was a lot of hand-to-hand warfare, for example in the Dordogne region of France, which was fought over by France and England in medieval times, and in Transylvania, which was the scene of Ottoman invasions. Fortified churches were also built in places controlled by colonial empires, such as the one in the Philippines that served as the scene of the Siege of Baler.

Although a large number of fortified churches in a variety of styles existed in the lands of Belarus only a handful have survived until the present. The most famous include Christian Orthodox churches in Muravanka and Synkovichi, as well as Catholic fortified churches in Kamai and Ishkold'. In addition to Christian churches Belarus also has the ruins of several fortified synagogues, of which the Chief Synagogue in Bykhaw is most notable.[1]

About 65[2] fortified churches are found in the Thiérache region of France.

A rare surviving example of a fortress church used for defensive purposes is the Church of St. Andrew in Kraków, one of the oldest and best-preserved Romanesque buildings in Poland. Located at ul. Grodzka street, it was built by a medieval Polish statesman Palatine Sieciech in 1079–1098. St. Andrew was the only Romanesque church in Kraków to withstand the Mongol attack of 1241. Along the lower part of the broader section of its façade are small openings that served as defensive windows during military siege.[3]

A number of medieval fortified churches, monasteries and cathedrals survive in Portugal. These buildings were built either in Romanesque or Gothic styles. Romanesque examples are the Lisbon Cathedral and the Old Cathedral of Coimbra. Gothic examples are the Church of Leça do Balio and the Guarda Cathedral.

There are medieval fortified churches near the Anglo-Scottish border, where defence was an important consideration until the seventeenth century when the two states were united in personal union. All Saints Church, Boltongate in Cumbria is an example.[5] Also in Cumbria, St Michael's Church, Burgh by Sands has a defensive tower, and originally had two.

Defensive towers can also be found on the England–Wales border, for instance, St Michael's Church, Garway.[6] 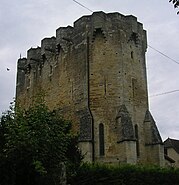 Courtyard of the fortified church of Prejmer, Romania

The fortified church of St. Alban and St. Wendelin, Germany

Fortified church of St. Louis in Baler, Philippines.
Add a photo to this gallery

Retrieved from "https://military.wikia.org/wiki/Fortified_church?oldid=5247460"
Community content is available under CC-BY-SA unless otherwise noted.