The French Army, officially the Armée de Terre (English: Land Army), is the land-based and largest component of the French Armed Forces. Just like the Armée de l'Air, the Marine Nationale and the Gendarmerie Nationale, it is placed under the responsibility of the French government. The current Chief of Staff of the French Army (CEMAT) is general Bertrand Ract-Madoux. All soldiers are considered professionals following the suspension of conscription, voted in parliament in 1997 and made effective in 2001.

In 1999 the Army issued the Code of the French Soldier, which includes the injunctions:

The first permanent army, paid with regular wages, was established under Charles VII of France. From 1792, the French Revolutionary Army fought the allies. Under Napoleon I, the French Army conquered most of Europe during the Napoleonic Wars. In August 1914, the French Armed Forces numbered 1,300,000 soldiers. During the First World War the French Armed Forces reached a size of 8,300,000 soldiers, of which about 300,000 came from the colonies. During the war around 1,400,000 soldiers were killed. It was the most deadly conflict in French history. The main generals were: Joseph Joffre, Ferdinand Foch, Charles Mangin, Philippe Pétain, Robert Nivelle, Franchet d'Esperey and Maurice Sarrail (See French Army in World War I).

At the beginning of the Second World War the Army deployed 2,240,000 combatants grouped into 94 divisions (of which 20 were active and 74 were reservists) from the Swiss border to the North Sea. These numbers did not include the Army of the Alps facing Italy and 600,000 men dispersed through the French colonial empire are not included in this figure.[citation needed] After defeat in 1940, the Vichy Army was allowed to retain 100-120,000 personnel in unoccupied France, and larger forces in the French Empire: more than 220,000 in Africa (including 140,000 in French North Africa),[5] and forces in Mandate Syria and French Indochina.[6] After 1945, despite enormous efforts in the First Indochina War of 1945–1954 and the Algerian War of 1954–62, both lands eventually left French control.

During the Cold War, the French Army, though not part of NATO's military command structure, planned for the defence of Western Europe.[7] In 1977 the French Army switched from multi-brigade divisions to smaller divisions of about four to five battalions/regiments each. After 1977, II Corps (France) was stationed in South Germany, and effectively formed a reserve for NATO's Central Army Group. In the 1980s, III Corps headquarters was moved to Lille and planning started for its use in support of NATO's Northern Army Group. The Rapid Action Force of five light divisions was also intended as a NATO reinforcement force.

In the 1970s-1980s, two light armoured divisions were planned to be formed from school staffs (the 12th and 14th). The 12th Light Armoured Division (12 DLB) was to have its headquarters to be formed on the basis of the staff of the Armoured and Cavalry Branch Training School (French acronym EAABC) at Saumur.[8]

In the late 1970s an attempt was made to form 14 reserve light infantry divisions, but this plan, which included the recreation of the 109th Infantry Division, was too ambitious. The planned divisions included the 102nd, 104e, 107e, 108e, 109e, 110e, 111e, 112e, 114e, 115th, and 127th Infantry Divisions. From June 1984, the French Army reserve consisted of 22 military divisions, administering all reserve units in a certain area, seven brigades de zone de defence, 22 regiments interarmees divisionnaires, and the 152nd Infantry Division, defending the ICBM launch sites.[9] The plan was put into action from 1985, and brigades de zone, such as the 107th Brigade de Zone, were created. But with the putting-in-place of the "Réserves 2000" plan, the brigades de zone were finally disbanded by mid-1993.[10]

In February 1996 the President of the Republic decided on a transition to a professional service force, and as part of the resulting changes, ten regiments were dissolved in 1997.[11] The specialized support brigades were transferred on 1 July 1997 to Lunéville for the signals, Haguenau (the artillery brigade) and Strasbourg (engineers). The 2nd Armoured Division left Versailles on 1 September 1997 and was installed at Châlons-en-Champagne in place of the disbanding 10th Armoured Division. On 5 March 1998, in view of the ongoing structural adoptions of the French Army, the Minister of Defence decided to disband III Corps, and the dissolution became effective 1 July 1998. The headquarters transitioned to become Headquarters Commandement de la force d'action terrestre (CFAT) (the Land Forces Action Command).

During the late 1990s, during the professionalisation process, numbers dropped from the 1996 236,000 (132,000 conscripts) to around 140,000.[12] By June 1999, the Army's strength had dropped to 186,000, including around 70,000 conscripts. 38 of 129 regiments were planned to be stood down from 1997–99. The previous structure's nine 'small' divisions and sundry separate combat and combat support brigades were replaced by nine combat and four combat support brigades. The Rapid Action Force, a corps of five small rapid-intervention divisions formed in 1983, was also disbanded, though several of its divisions were re-subordinated.

The organisation of the army is fixed by Chapter 2 of Title II of Book II of the Third Part of the Code of Defense, notably resulting in the codification of Decree 2000-559 of 21 June 2000.[13]

The French Foreign Legion was established in 1831 for foreign nationals willing to serve in the French Armed Forces. The Legion is commanded by French officers. It is an elite military unit numbering around 7,000 troops. The Legion has gained world wide recognition for its service, most recently in Operation Enduring Freedom in Afghanistan since 2001.

The Troupes de marine are the Marine Infantry of the French Army, the former Colonial Troops, deployed overseas. They work closely with the French Navy and as such are often deployed around the world.

In the 1970s France adopted a light beige dress uniform which is worn with coloured kepis, sashes, fringed epaulettes, fourragères and other traditional items on appropriate occasions. The most commonly worn parade dress however consists of camouflage uniforms worn with the dress items noted above.

The legionnaires of the French Foreign Legion wear white kepis, blue sashes and green and red epaulettes as dress uniform, while the Troupes de marine wear blue and red kepis and yellow epaulettes. The pioneers of the French Foreign Legion wear the basic legionnaire uniform but with leather aprons and gloves. The Chasseurs Alpins wear a large beret, known as the "tarte" (the pie) with dark blue or white mountain outfits. The Spahis retain the long white cloak or "burnous" of the regiment's origin as North African cavalry.

Sailors of the French Navy and Fusiliers Marins wear a dress uniform dating from the nineteenth century with a distinctive red pom-pom on the crown of the round cap.

The infantry and cavalry of the Republican Guard retain their late 19th century dress uniforms, as do the military cadets of Saint-Cyr and the École Polytechnique. A medium blue evening dress for officers is now seldom seen but individual branches or regiments may parade bands or "fanfares" in historic dress dating as far back as the Napoleonic period.

The FAMAS is the service rifle of the French military. 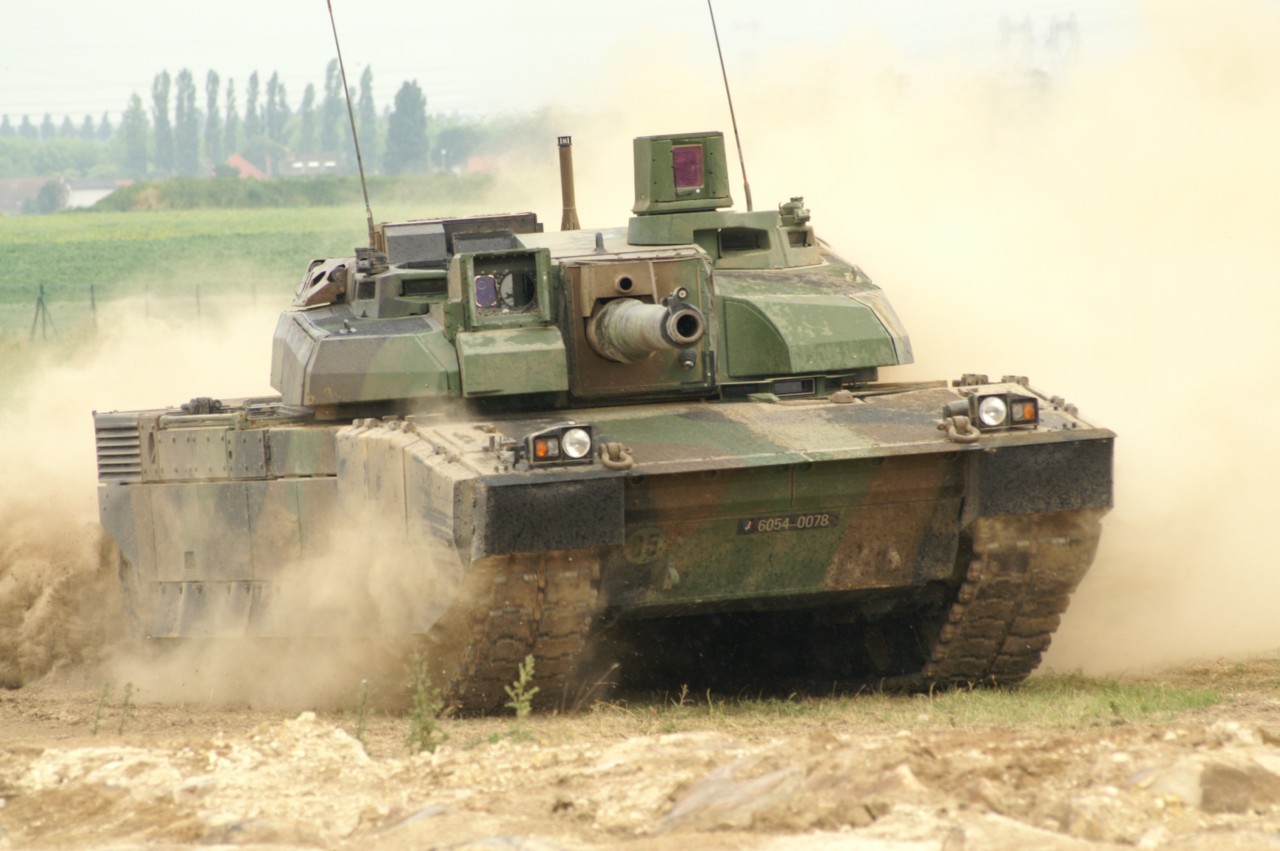 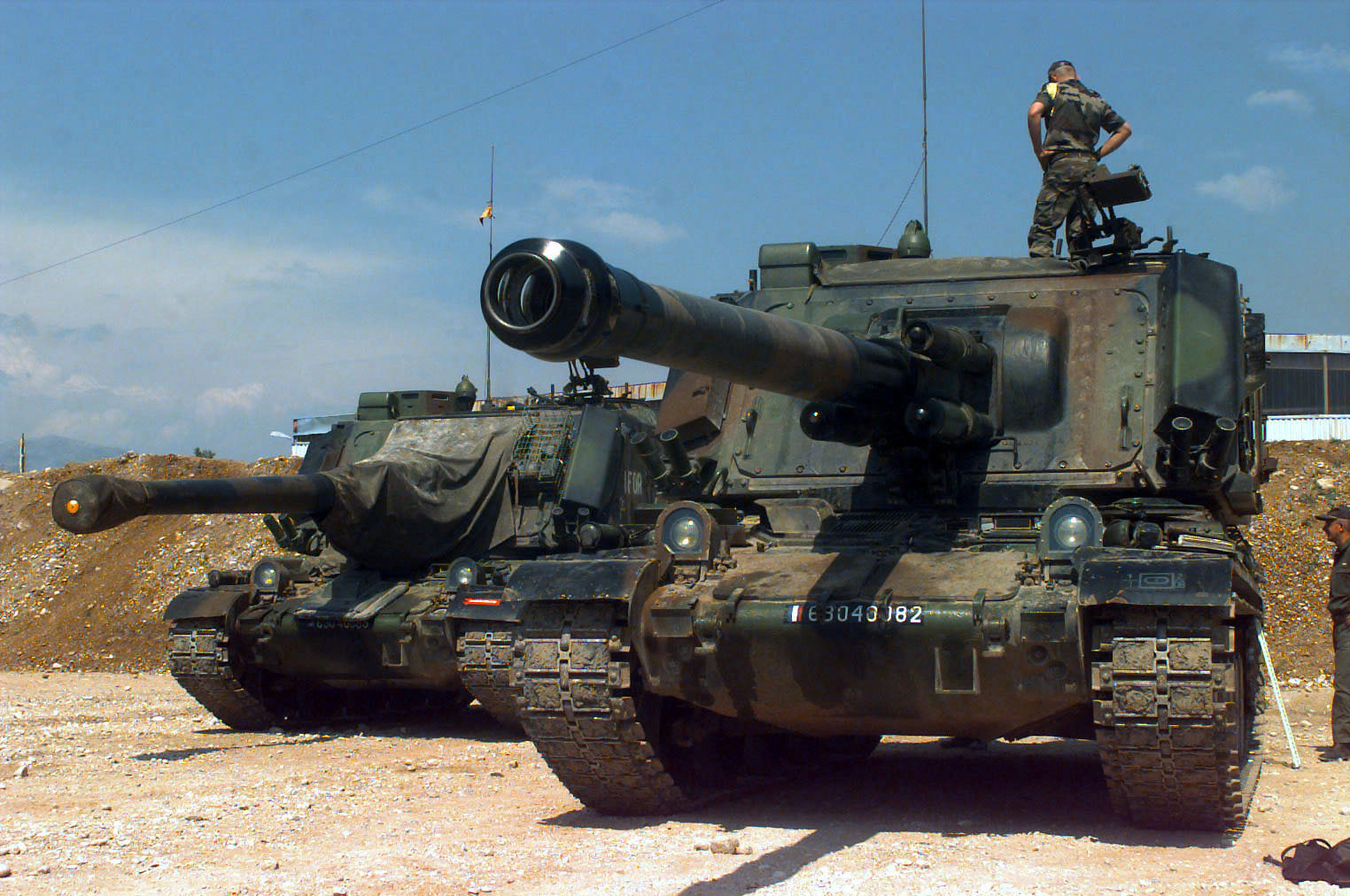 Eurocopter Tiger attack helicopter.
Add a photo to this gallery

Retrieved from "https://military.wikia.org/wiki/French_Army?oldid=4686596"
Community content is available under CC-BY-SA unless otherwise noted.