Before the war, Gęsiówka was a military prison of the Polish Army on Gęsia Street (now Anielewicza Street). Beginning in 1939, after the German occupation of Poland, it became a re-education camp of the German security police (Arbeitserziehungslager der Sicherheitspolizei Warschau). In 1943 it was turned into a concentration camp for inmates from beyond Warsaw and Poland, equipped with a crematorium. The camp was joined with a nearby Pawiak prison and formed the backbone of the Warsaw concentration camp complex. Inmates (mostly Jews) included prisoners from Czechoslovakia, France, Greece, Hungary, Belgium and Germany.

On August 5, 1944, during the early phase of Warsaw Uprising, Armia Krajowa's Battalion "Zośka" (Radosław Group of Szare Szeregi) led by Ryszard Białous and Eugeniusz Stasiecki attacked the Gęsiówka camp which was being liquidated at the time. The Panther tank "Magda", one of two captured by the insurgents on August 2, was instrumental in the attack, supporting the assault with fire of its main gun. In the ensuing one-and-half-hour battle most of the SD guards were killed or captured, although some of the Germans managed to flee in direction of Pawiak. Only two Polish fighters were killed in the attack and 348 able-bodied Jewish prisoners, who were left in Gęsiówka to assist with the destruction of the evidence of mass murder, were rescued from certain death. Most of these survivors joined the Zośka unit and fought in the uprising. Later in the uprising, most of them were killed, together with those who had freed them.[1] 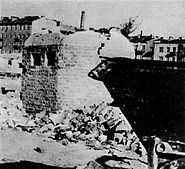 Gęsiówka after takeover by Polish fighters. In the picture a soldier and two of 348 Jews liberated from the Gęsiówka (August 5, 1944)

Soldiers from "Giewont" company secure Gęsiowka after takeover. In the back crematorium building at Gęsia 26 (August 5, 1944)

Soldiers from "Zośka" Battalion in watchtower after takeover of Gęsiówka (August 5, 1944)

Retrieved from "https://military.wikia.org/wiki/Gęsiówka?oldid=2552130"
Community content is available under CC-BY-SA unless otherwise noted.