The war crime that is often referred to as the "Gardelegen massacre" occurred on April 13, 1945, on the Isenschnibbe estate near the northern German town of Gardelegen. German SS and Luftwaffe troops forced 1,016 slave laborers who were part of a transport evacuated from the Mittelbau-Dora labor camp into a large barn which was then lit on fire. Most of the prisoners were burned alive; some were shot trying to escape. The crime was discovered two days later by F Company, 2nd Battalion, 405th Regiment, U.S. 102nd Infantry Division when the U.S. Army occupied the area. 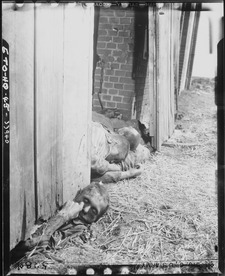 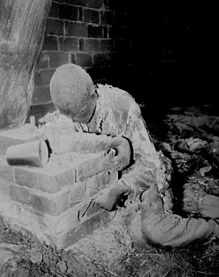 The discovery of the massacre seems to have been by chance. The consensus account is that American Lieutenant Emerson Hunt, a liaison officer between Ozark HQ and the 701st Tank Battalion, was captured by German forces on April 14, 1945, that he bluffed the German forces defending the town of Gardelegen into believing that American tanks were approaching the city, and that this induced the German commander to surrender to the American forces. The Americans arrived at the site before the Germans had time to bury all of the bodies.

On April 3–4, following the U.S. Army's crossing of the Rhine River and push into Germany, the SS camp administration at Dora-Mittelbau had ordered the evacuation of prisoners from the main camp and a number of its affiliated subcamps. The goal was to transport the inmates by train or by foot to the other north German concentration camps: Bergen-Belsen, Sachsenhausen, or Neuengamme.

Within days, some 4,000 prisoners from Dora-Mittelbau, its satellite camps, and a Neuengamme subcamp arrived in the Gardelegen area, where they had to deboard from the freight cars because the trains could not advance any further due to air raid damage to the rail lines. Greatly outnumbered by the prisoners, the SS guards began recruiting auxiliary forces from the local fire department, the air force, the aged home guard, the Hitler Youth, and other organizations to watch over the inmates.

On April 13, more than a thousand prisoners, many of them sick and too weak to march any further, were taken from the town of Gardelegen to a large barn on the Isenschnibbe estate and forced inside the building. The assembled guards then barricaded the doors and set fire to gasoline-soaked straw. Prisoners who escaped the conflagration by digging under the barn's walls were killed by the guards. The next day, the SS and local auxiliaries returned to dispose of the evidence of their crime. They planned to incinerate what remained of the bodies and the barn, and kill any survivors of the blaze. The swift advance of the 102nd Infantry Division (United States), however, prevented the SS and its accomplices from completely carrying out this plan.

On April 14, the 102nd entered Gardelegen and, the following day, discovered the atrocity. They found the corpses of 1,016 prisoners in the still-smoldering barn and nearby trenches, where the SS had had the charred remains dumped. They also interviewed several of the prisoners who had managed to escape the fire and the shootings. U.S. Army Signal Corps photographers soon arrived to document the Nazi crime and by April 19, 1945, the story of the Gardelegen massacre began appearing in the Western press. On that day, both the New York Times and The Washington Post ran stories on the massacre, quoting one American soldier who stated:

I never was so sure before of exactly what I was fighting for. Before this you would have said those stories were propaganda, but now you know they weren't. There are the bodies and all those guys are dead.

On April 21, 1945, the local commander of the 102nd ordered between 200 and 300 men from the town of Gardelegen to give the murdered prisoners a proper burial. Over the next few days, the German civilians exhumed 586 bodies from the trenches and recovered 430 bodies from the barn, placing each in an individual grave. On April 25, the 102nd carried out a ceremony to honor the dead and erected a memorial tablet to the victims, which stated that the townspeople of Gardelegen are charged with the responsibility that the “graves are forever kept as green as the memory of these unfortunates will be kept in the hearts of freedom-loving men everywhere.” Also on April 25, Colonel George Lynch addressed German civilians at Gardelegen with the following statement:

The German people have been told that stories of German atrocities were Allied propaganda. Here, you can see for yourself. Some will say that the Nazis were responsible for this crime. Others will point to the Gestapo. The responsibility rests with neither — it is the responsibility of the German people....Your so-called Master Race has demonstrated that it is master only of crime, cruelty and sadism. You have lost the respect of the civilized world.

Text of Lieutenant Cruise's report and text of other exhibits are stored in US Army file 000-12-242.

The man who gave the order to burn the prisoners, Gerhard Thiele, escaped by disguising himself in the uniform of a German soldier and traveling with false papers. He lived in the Western zone of occupation and later in West Germany under a false name. He was never brought to justice and died June 30, 1994.[1]

SS-Untersturmführer Erhard Brauny, the transport leader for the prisoners evacuated from the Mittelbau-Dora concentration camp who subsequently wound up in Gardelegen, was put on trial in 1947 before a US military tribunal and was sentenced to life in prison. He died in 1950.

Gardelegen is now a national memorial.

This article incorporates text from the United States Holocaust Memorial Museum, and has been released under the GFDL.

Retrieved from "https://military.wikia.org/wiki/Gardelegen_(war_crime)?oldid=2561208"
Community content is available under CC-BY-SA unless otherwise noted.