The Gendarmerie General Command (Turkish language: Jandarma Genel Komutanlığı) or Turkish Gendarmerie (Turkish language: Türk Jandarması) is a branch of the Turkish Armed Forces responsible for the maintenance of the public order in areas that fall outside the jurisdiction of police forces (generally in rural areas), as well as assuring internal security and general border control along with carrying out other specific duties assigned to it by certain laws and regulations. The Gendarmerie is essentially a governmental armed security and law enforcement force of military nature.

As a part of the Turkish Armed Forces, the General Command of the Gendarmerie is subordinate to the Turkish General Staff in matters relating to training and education in connection with the Armed Forces, and to the Ministry of the Interior in matters relating to the performance of the safety and public order duties. The Commander of the Gendarmerie reports to the Minister of the Interior.

The Gendarmerie has its roots in the Ottoman Empire military law enforcement organization "Subaşı" (later known as the "Zaptiye"), which carried out security and safety services. A similar, earlier force was called "Şurta" during the medieval Seljuq Empire.

After the abolition of the Janissary corps of the Ottoman Empire in 1826, military organizations called Asâkir-i Muntazâma-i Mansûre, Asâkir-i Muntazâma-i Hâssa, and, in 1834, Asâkir-i Redîfe were established to deliver security and public order services in Anatolia and in some provinces of Rumelia.

Since the term Gendarmerie was noticed only in the Assignment Decrees published in the years following the declaration of Tanzimat in 1839, it is assumed that the Gendarmerie organization was founded after that year, but the exact date of foundation has not yet been determined. Therefore, taking the June 14 of "June 14, 1869", on which Asâkir-i Zaptiye Nizâmnâmesi was adopted, June 14, 1839 was accepted as the foundation date of the Turkish Gendarmerie.[4]

After 1877–1878 Russo-Turkish War, Ottoman prime minister Mehmed Said Pasha decided to bring some officers from Britain and France to establish a modern law enforcement organization. After the Young Turk Revolution in 1908, the Gendarmerie achieved great successes, particularly in Rumelia. In 1909, the Gendarmerie was affiliated with the Ministry of War, and its name was changed to the Gendarmerie General Command (Ottoman Turkish language: Umûm Jandarma Kumandanlığı).

Gendarmerie units both sustained their internal security duties and took part in the national defence at various fronts as a part of the Armed Forces during the World War I and the Turkish War of Independence.

Law No. 6815, which entered into force in 1956, assigned the Gendarmerie General Command duties such as protecting borders, coasts and territorial waters, and fighting smuggling, which had been previously carried out by the Gümrük Umum Kumandanlığı that was a military organization at the level of division in affiliation to the Ministry of Customs and Monopoly.

In 1957, Gendarmerie Border Units were transformed into brigades, and Gendarmerie Training Brigades were established.

In 1961, Gendarmerie Regional Commands were established.

In 1968, the first Gendarmerie Aviation Unit was established in Diyarbakır under the name of Light Helicopter Company Command.

In 1974, Gendarmerie Commando Units and Gendarmerie Aviation Units took part in the Turkish invasion of Cyprus.

Law No. 2692 which entered into force in 1982 assigned the duty of protecting the coasts and territorial waters to the Coast Guard Command.

Law No. 2803 on the Organization, Duties and Responsibilities of the Gendarmerie entered into force in 1983.

Law No. 3497 entering into force in 1988 assigned the duty of protecting the land borders and ensuring their security to the Land Forces Command, but Gendarmerie General Command still holds the responsibility for some parts of the Iranian and Syrian borders and the whole Iraqi border.

Since 1984, Gendarmerie units have been the most important element of the conflict against Kurdish separatists.

The General Command is composed of:[6]

Gendarmerie officer with an MP5 at Topkapı Palace in Istanbul. 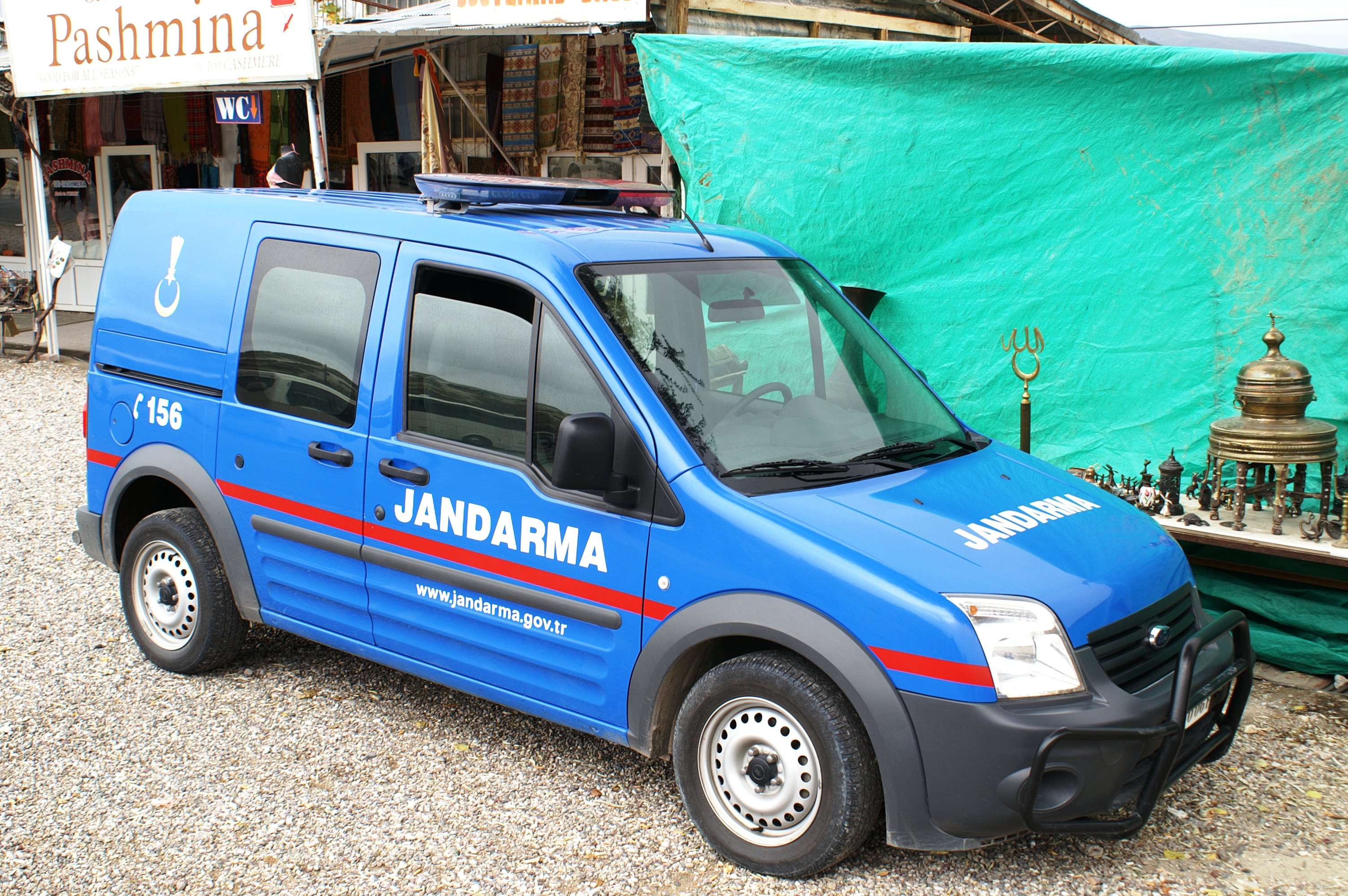 Gendarmerie's Ford Transit and a trooper.

Traffic gendarmerie's Renault Megane.
Add a photo to this gallery

Retrieved from "https://military.wikia.org/wiki/Gendarmerie_General_Command?oldid=4179508"
Community content is available under CC-BY-SA unless otherwise noted.