Army Command (German language: Heeresführungskommando) in Falckenstein Barracks in Koblenz is one of the two leadership pillars of the German Army, together with the German Army Office.

Since 1994, Army Command, as the supreme command authority, has directed the majority of military units within the Army. However, army troops on operations abroad are commanded by the Bundeswehr Operations Command of the Bundeswehr based at Potsdam. Currently Army Command has about 83,500 soldiers in its subordinate organisations. Army Command is led by Lt. Gen. Carl-Hubertus von Butler and reports to the German General Staff.

The Army Command Badge is similar to the badge of the former Corps, although it lacks the Roman numeral. It portrays the symbol of German sovereignty, the federal eagle. Its colour scheme is based on that of the German Federation: black, red and gold. The badge is worn by military personnel on the staff of the Command on the left sleeve of their service dress. The braided black and gold piping represents its status above the Army's divisions, which have silver instead of gold braid.

The primary functions of the Command are:

Until the 1990s, the German Army was led on operations by NATO. The change in the security situation in Europe resulting from the dissolution of the Soviet Union required a national German command to be formed.

Following the disbandment of III Corps, Army Command was formed in the same location in Koblenz on 31 March 1994 from elements of the former corps staff and placed under command of Lieutenant General Klaus Reinhardt. From 2001, with the Army's division reporting directly to Army Command, the corps level of command was dropped. In 2002, the Bundeswehr Operations Command in Potsdam was established and, from then on, German troops on international operations are commanded from there. Before that, Army Command led a number of operations, beginning in 1995, such as IFOR, SFOR, AFOR and Kosovo Force (KFOR) in the Balkans and the International Security Assistance Force in Afghanistan.

Army Command is led by a lieutenant general. The general in charge of Army Command since 16 March 2009 has been Lieutenant General Carl-Hubertus von Butler. He succeeded Lieutenant General Wolfgang Otto. Reporting to the commander are his deputy (a major general) and his chief of staff (a brigadier general). The staff of Army Command currently consist of some 400 soldiers and 50 civilians. The fourth post at general level in the time of Drew and Korte was the post of the General of National and Territorial Tasks (GNTA). 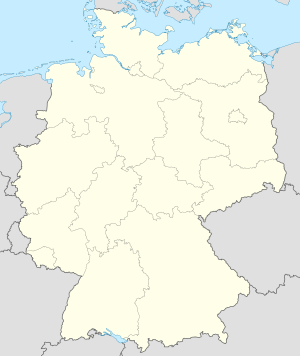 In addition the following central depots also answer to the Army Command:

Army Command also provides forces for EU Battlegroups, for the NATO Response Force and for the United Nations when asked. In addition to the Franco-German Brigade, Army Command provides permanent German elements on the staffs and supporting units as well as other troops for:

Retrieved from "https://military.wikia.org/wiki/German_Army_Command?oldid=4668561"
Community content is available under CC-BY-SA unless otherwise noted.