The term "gunship" is used in several contexts, all sharing the general idea of a light craft armed with heavy guns.

In the Navy, the term "gunship" originally appeared in the mid-19th century as a less-common synonym for gunboat and referred to the heavily armed ironclad steamships used during the American Civil War.

During 1942 and 1943, the lack of a usable escort fighter for the USAAF in the European Theatre of Operations led to experiments in dramatically increasing the armament of a standard B-17F Flying Fortress, and later a B-24D Liberator to each have a total of some 14–16 Browning AN/M2 .50 cal machine guns as the YB-40 and XB-41 "heavy fighters" respectively, each meant to accompany regular heavy bomber formations over occupied Europe on strategic bomber raids for long-range escort duties. The YB-40 was sometimes described as a "gunship"[1] and a small 25-aircraft batch of the B-17-derived "gunships" were built, with a dozen of these deployed to Europe, while the XB-41 remained a prototype only.

During WWII, the urgent need for hard-hitting attack aircraft, led to the development of the heavily armed gunship versions of the North American B-25 Mitchell. The 405 examples produced of the B-25G variant were armed with a 75 mm (2.95 in) M4 cannon and the thousand examples produced of the B-25H followed with a lighter TE13E1 cannon of the same caliber.[2] The most built B-25J variant omitted such heavy-calibre weaponry, but could in some cases, carry an impressive total of eighteen AN/M2 Browning machine guns, more than any contemporary American aircraft: eight in the nose, four in under-cockpit conformal flank-mount gun pod packages, two in the dorsal turret when aimed directly forward, one each in the pair of waist positions, and a pair in the tail[2]—with fourteen of the guns either permanently aimed forward, or temporarily fixed forward for strafing missions.[3] Later B-25J was additionally armed with eight 5 in. (130 mm) high velocity aircraft rockets (HVAR).[2][4]

In the more modern, post-WWII fixed-wing aircraft category, a gunship is an aircraft having laterally-mounted[5] heavy armaments (i.e. firing to the side) to attack ground or sea targets.[6] These gunships were configured to circle the target instead of performing strafing runs. Such aircraft have their armament on one side harmonized to fire at the apex of an imaginary cone formed by the aircraft and the ground when performing a pylon turn (banking turn).[5][6]

As the first notable case of the now-standard use of "gunship", in 1964, during the Vietnam War,[5] the popular C-47 Dakota transport was successfully modified with side-firing Miniguns for circling attacks. At the time the aircraft was known as "dragonship" or "Puff, the Magic Dragon" (officially designated FC-47, later corrected to AC-47). It was the later and larger AC-130 Gunship II that became the modern, post–World War II origin of the term "gunship" in military aviation.[7] These heavily armed aircraft used a variety of weapon systems; including 7.62 mm GAU-2/A Miniguns, 20 mm (0.787 in) M61 Vulcan six-barrel Gatling cannons, 25 mm (0.984 in) GAU-12/U Equalizer five-barreled Gatling cannons, 30 mm Mk44 Bushmaster II chain guns, 40 mm (1.58 in) L/60 Bofors cannon, and 105 mm (4.13 in) M102 howitzers. The Douglas AC-47 Spooky, the Fairchild AC-119,[8] and the AC-130 Spectre/Spooky,[9] were vulnerable, and meant to operate only after achieving air superiority.[5]

Early helicopter gunships also operated in the side-firing configuration, an example being the Aérospatiale Alouette III initially used in the Portuguese Colonial War and then also in the South African Border and Rhodesian Bush wars.[10]

During the Vietnam War, the ubiquitous UH-1 helicopters were modified into gunships by mounting the U.S. Helicopter Armament Subsystems—these were forward-firing weapons, such as machine guns, rockets, and cannon, that began to appear in 1962–1963.[11] Rotary-wing aircraft (helicopters) can use a variety of combat maneuvers to approach target. In their case, the term gunship is synonymous with heavily armed helicopter.[12] Specifically, dedicated attack helicopters such as the AH-1 also fit this meaning.[12] In any case, the gunship armaments include machine guns, rockets, autocannon, missiles, etc.[12]

The Soviet Mil Mi-24 (NATO code name: Hind) is a large, heavily armed and armored helicopter gunship and troop transport.[13] Introduced in the 1970s and operated by the pre-1991 Soviet Air Force and its successors post-1991, and more than 30 other nations.[14] Its armaments include machine guns, rockets, cannons, missiles, etc.[15] Its body is heavily armored and was designed to withstand .50 caliber (12.7 mm) machine-gun fire. Its armored cockpits and titanium rotor head are able to withstand 20-mm cannon hits.[16]

USS Cairo one of the first U.S. Navy Gunships

Closeup of an early model B-25 gun pod.

AC-47 gunship - one Gatling gun points out the cargo door, and one each points out of the two windows forward of the door. 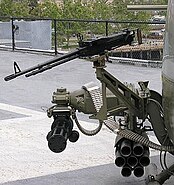 HIND Mil Mi-24 gunship
Add a photo to this gallery

Retrieved from "https://military.wikia.org/wiki/Gunship?oldid=4209800"
Community content is available under CC-BY-SA unless otherwise noted.