The HK 4.6×30mm cartridge is a type of ammunition used in the Heckler & Koch MP7 Personal Defense Weapon (PDW) and by the canceled HK UCP pistol. It is an indigenous German cartridge. It is designed to minimize weight and recoil while increasing penetration of body armor. It features a bottlenecked case and a pointed, steel-core, brass-jacketed bullet.

Compared to conventional assault rifle cartridges one can carry more 4.6×30mm ammunition due to the lighter weight and relative small dimensions of the cartridge. Also, due to the lighter weight of the bullet, aiming in rapid fire is much easier as recoil depends much on the weight of the bullet. CRISAT testing shows that because of the smaller diameter and high projectile velocity of the round, body armor penetration is higher than that of traditional handgun projectiles.

The 4.6×30mm cartridge has been claimed to have low terminal effectiveness, especially by those who disagree with the "energy dump" theory of wound ballistics, such as Dr. Martin Fackler.[citation needed] Kinetic energy manifests itself in human tissue in temporary stretching of tissue, which most tissue except for liver and neural tissue is able to withstand with little ill effect. Slow motion videos show that the 4.6 mm bullet yaws at impact on soft tissue. This is because the center of mass of the bullet is behind the geometric center, causing the back to come forward at impact, and therefore tumbling through soft tissue, creating much greater damage, according to the "energy dump" theory.

Testing done by HKPro in 2000 indicated that the 4.6×30mm cartridge penetrated deeper in 20% ballistic gelatin and transferred slightly more energy than the 5.7×28mm cartridge fired from the FN P90.[4] However, a more recent series of tests performed by NATO in the United Kingdom and France indicated that 5.7×28mm was the superior cartridge.[9] The results of the NATO tests were analyzed by a group formed of experts from France, the United States, Canada, and the United Kingdom and the group's conclusion was that the 5.7×28mm was "undoubtedly" the more efficient cartridge.[9]

Among other points, the NATO group cited superior effectiveness (27% greater) for the 5.7×28mm against unprotected targets and equal effectiveness against protected targets.[9] It also cited less sensitivity to extreme temperatures for the 5.7×28mm and cited a greater potential risk of barrel erosion with the 4.6×30mm.[9] In addition, the group pointed out that 5.7×28mm is close to the 5.56×45mm NATO by its design and manufacture process, allowing it to be manufactured on existing production lines.[9] The group also pointed out that 5.7×28mm weapons are more mature than 4.6×30mm weapons, and the 5.7×28mm FN Five-seven pistol was already in production at that time, while the 4.6×30mm Heckler & Koch UCP pistol was still only an early concept.[9] However, the German delegation and others rejected the NATO recommendation that 5.7×28mm be standardized, and as a result, the standardization process was indefinitely halted.[1][9] 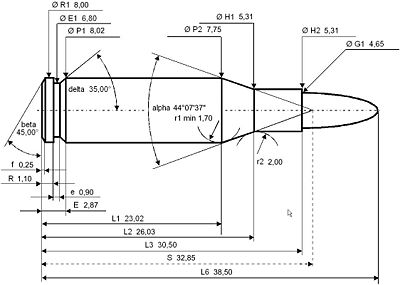 According to the official C.I.P. (Commission Internationale Permanente pour l'Epreuve des Armes à Feu Portatives) guidelines, the 4.6×30mm case can handle up to 400 MPa (58,015 psi) piezo pressure. In C.I.P. regulated countries every pistol cartridge combo has to be proofed at 130% of this maximum C.I.P. pressure to certify for sale to consumers.

The Belgian 5.7×28mm cartridge introduced in 1993 is probably the closest currently available ballistic twin of the 4.6×30mm.

The Action 4.6×30mm Law Enforcement cartridge weighs 6.5 g and is loaded with a 2 g CuZn-alloy (brass) Solid Hollow Point projectile that achieves 700 m/s (2,300 ft/s) muzzle velocity. The cartridge is designed for the MP7. This ammunition is optimized for energy transfer in soft targets and should offer decent penetration performance on hard and combined targets like car doors or glass and body armour.[13] The muzzle velocity V0 and V50 indicate a G1 ballistic coefficient of approximately 0.112 to 0.119 (BC's are somewhat debatable). At the stated effective range of 200 m the 2 g Action projectile will be travelling at approximately Mach 1.67 (586 m/s) under ICAO Standard Atmosphere conditions at sea level (air density ρ = 1.225 kg/m3).

The Ball 4.6×30mm cartridge weighs 7 g and is loaded with a 2.7 g Full Metal Jacket projectile with a PbSb – alloy core and a steel copper plated jacket that achieves 600 m/s (2,000 ft/s) muzzle velocity. The cartridge is designed for the MP7. This ammunition is optimized for energy transfer in soft targets and should offer good precision.[15] The muzzle velocity V0 and V100 indicate a G1 ballistic coefficient of approximately 0.171 to 0.187 (BC's are somewhat debatable). At the stated effective range of 200 m the 2.7 g Ball projectile will be travelling at approximately Mach 1.36 (463 m/s) under ICAO Standard Atmosphere conditions at sea level (air density ρ = 1.225 kg/m3).

VBR produces a 4.6×30mm 2-part controlled fragmenting projectile that is claimed to increase the content of the permanent wound cavity and double the chance to hit a vital organ.[17] Heckler & Koch claims that the CPS Black Tip ammunition made by Fiocchi has a muzzle energy of approximately 525 J that would be comparable to 9 mm rounds.[18][19]

Retrieved from "https://military.wikia.org/wiki/HK_4.6×30mm?oldid=4383833"
Community content is available under CC-BY-SA unless otherwise noted.