For other ships of the same name, see HMS Saxifrage and HMS President.

HMS President (1918), formerly HMS Saxifrage, is a Flower-class anti-submarine Q-Ship completed in 1918, and is one of the last three surviving warships of the Royal Navy built during the First World War, (along with the 1914 Light cruiser HMS Caroline in Belfast, and the 1915 Monitor HMS M33 in Portsmouth dockyard). President represents the first type of warship built specifically for anti-submarine warfare; her successors evolved into the modern anti-submarine Frigate, which is the most numerous type of front-line fighting ship in today's Royal Navy.

In 1922 she was moored permanently on the Thames at Blackfriars, and became a Royal Naval Reserve Drill ship for sixty-five years. Her new name, HMS President, was inherited from the first London naval reserve Drill ship: the "Old President" of 1832-1903, whose name celebrated the capture of both the French frigate Président in 1806, and the American 'super-frigate' USS President in 1815.

In 1988 she was purchased by ED Berman MBE for the charity Inter-Action, which saved her for posterity. She was authorised to retain her warship name "HMS President" with the suffix "(1918)". She was resold in 2001 and again in 2006, and now operates as a venue for conferences and functions, and serves as the offices for a number of media companies. She has survived an additional 25 years in this guise, and will reach her centenary in 2018.

The present owners plan to present her as an historical resource during the 2014-18 First World War centenary, as the U-Boat campaign of World War I was the greatest peril that Britain faced, and the most critical naval conflict of that War.

History of the ship[edit | edit source]

The original Flower class sloops (the Acacia, Azalea and Arabis-classes) were all built in 1915 as Fleet minesweeping Vessels, with triple hulls at the bow to give extra protection against loss from mine damage when working. When submarine attacks on British merchant ships became a serious menace after 1916, the existing Flower-class minesweepers were transferred to convoy escort duty, and fitted with depth charges as well as 4.7-inch naval guns.

The later types of Flower class (the Aubretia and Anchusa-classes) - of which HMS President (1918) is the sole surviving example - were built in 1916-18 as submarine hunters disguised to look like merchant ships, while carrying concealed 4-inch and 12-pounder naval guns. This was because the U-boats would dive at the sight of a naval warship, and because of the success of the Q-Ships, or 'Mystery-ships' - converted merchantmen with hidden guns - in hunting submarines. Their concept of operations was based on the idea that a U-boat captain would be unwilling to expend a precious torpedo on a small coastal merchantman, so would surface to sink it by gunfire. As the submarine closed for the kill, the Q-ship would reveal her hidden guns and counter-attack while the U-boat was at its most vulnerable on the surface. By the time the "Warship-Qs" were constructed, the Germans were well aware of this tactic, and with the introduction of unrestricted submarine warfare these sloops became active - rather than passive - submarine chasers.

In the case of the Warship-Qs the individual builders were asked to use their existing designs for merchantmen, based on the standard Flower-type warship hull. This included a dummy merchant-ship sternpost rudder, mounted above the waterline over a much more manoeuvrable 'balanced rudder' which allowed the ship to make a fast turn to bring her guns or depth charges to bear on a U-boat, or even to ram it before it could escape. 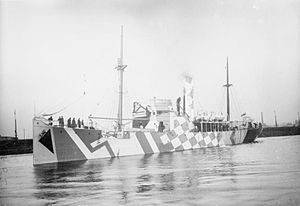 The class were also given a wide variety of spectacular dazzle camouflage schemes to confuse the primitive range-finders of WW1 submarines. Altogether, 120 "Flowers" were built, of which eighteen were sunk in action during the war.

The "Warship-Qs" were thus the very first purpose-built anti-submarine fighting ships, and their successor types were the anti-submarine sloops of the second world war. HMS Wellington, a 1934 Grimsby-class sloop, is moored nearby, and represents the subsequent type of anti-submarine vessel, which evolved into the modern ASW Frigate during the 1939-45 Battle of the Atlantic, through the famous Black Swans, and River and Loch-class frigates. President and Wellington are thus the antecedents of the most numerous type of front-line fighting ship in today's Royal Navy.

HMS President herself was built at the shipyard of Lobnitz & Company, Renfrew, Scotland as Yard Number 827.[1] She was originally named HMS Saxifrage after the flower also known as London Pride. Her active service was brief, and in 1922 she was permanently moored on the Thames, and renamed HMS President. Other members of the class served as Empire patrol vessels throughout the world during the peacetime years between the wars, but almost all were disposed of by the Second world war. This allowed the majority of the class names to be revived in WW2 for the new, smaller Flower-class corvettes, including both Saxifrage and Chrysanthemum. This was a naval warship class based on a commercial ship design, which carried the brunt of the anti-submarine war in 1940-42 before the larger Frigate designs became available. (These WW2 Flowers were immortalised by Nicholas Monsarrat in his 1951 novel The Cruel Sea, which was filmed in 1953 with Jack Hawkins. The Belgian Navy manned some of these vessels during WW2, and have continued to use Flower names for their minehunters to this day).

In July 1922 HMS Saxifrage was moored permanently on the River Thames for use as a Drill Ship by the RNVR. She was renamed President after the original large wooden frigate of 1832 which had served as the RNVR London Drill ship between 1862 and 1903, just over seventy years in RN service. In the final year of her life she was renamed as the Old President. This ship had been constructed on the exact lines of the American 'super-frigate' USS President which was captured by the Royal Navy at the close of the War of 1812, and the name was deliberately retained in memory both of this capture, and also the 1806 capture of the French frigate Président which had also served as HMS President from 1806 to 1815.

All Old President's successors in the London RNR role had also been renamed President, including HMS Gannet, (built 1878; RNVR service 1903-11, and now preserved in Chatham Historic Dockyard), and HMS Buzzard, (built 1887; RNVR drill ship 1911-22). All naval personnel working at the Admiralty and elsewhere in London were nominally appointed to service in HMS President, and they were paid and administered by her staff.

During the Second World War Saxifrage/President was converted to a gunnery training ship, fitted with a large overall "shed" superstructure. Her sister Flower-class Q-Ship, HMS Chrysanthemum of 1917, was moored ahead of her in 1938 to provide additional office and training space. After the war both were reconstructed by the Royal Navy with large deckhouses fore and aft, giving an improved drill area and extra offices; they were also provided with tall wheelhouses and dummy funnels. These were dismountable, so they could pass under the London bridges to be periodically maintained in one of the Thames dockyards. In this form, they continued in use as RNR training ships until 1988, each matching the Old President's total of more than seventy years in Royal Navy service.[2] These were last Royal Navy warships to wear the Victorian battleship livery of black hull, white superstructure and Royal Navy buff yellow funnel and masts.

Since 1988, the name HMS President has been given to a shore establishment of the Royal Naval Reserve in St Katherine's Dock near Tower Bridge.

In 1988 the ship was saved by the charity Inter-Action, run by ED Berman MBE, and provided a base for start-up companies for young people, and audio-visual studios. This period saved her from scrap, and preserved her for future generations. She had become a London landmark, marked on street maps, so was permitted to retain her warship title and name "HMS President" with the added suffix "(1918)", to distinguish her from the new shore establishment. (Chrysanthemum was hired to Stephen Spielberg for the boat chase sequences shot in 1988 in Tilbury Docks for the film Indiana Jones and the Last Crusade. She was then laid up in the River Medway, where the brackish water rusted her hull so badly that she was scrapped in 1995)

President was resold in 2001 to David Harper Associates, then purchased in April 2006 by the serviced office company, MLS Group Plc. She serves as a venue for conferences and functions and also houses the offices of a number of media companies. She has survived an additional 25 years in this guise, and will reach her centenary in 2018.

HMS President is permanently berthed in the River Thames on the Victoria Embankment in the City of London close to Blackfriars Millennium Pier and is listed on the National Register of Historic Vessels. The present owners plan to present her as an historical resource during the 2014-18 First World War centenary, as the U-Boat campaign of World War I was the greatest peril that Britain faced in 1917-18, and was the most critical naval conflict of that War.

Students of Naval history are welcome to visit the ship by appointment. The nearest London Underground stations are Temple and Blackfriars on the District and Circle Lines. Blackfriars is a National Rail station. They are within Travelcard Zone 1.

Retrieved from "https://military.wikia.org/wiki/HMS_President_(1918)?oldid=3339586"
Community content is available under CC-BY-SA unless otherwise noted.