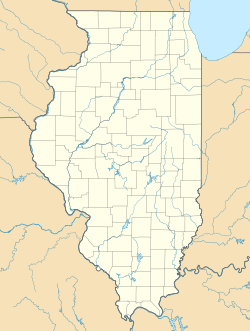 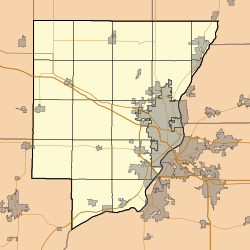 Hanna City Air Force Station (ADC ID: P-63, NORAD ID: Z-63) is a closed United States Air Force General Surveillance Radar station. It is located 1.6 miles (2.6 km) west-northwest of Hanna City, Illinois. It was closed in 1968. It is still in use by the Federal Aviation Administration as a Joint Surveillance System radar station.

Receiving the Defense Secretary’s approval on July 21, the Air Force directed the Corps of Engineers to proceed with construction. 42.8 acres (17.3 ha) were acquired between 1952 and July 1959. The Air Force constructed and operated the station, which included over 35 buildings and miscellaneous smaller structures.

The 791st Aircraft Control and Warning Squadron was activated at Hanna City AFS on 10 May 1951 and began operations using AN/FPS-3 and AN/FPS-4 radars, and initially the station functioned as a Ground-Control Intercept (GCI) and warning station. As a GCI station, the squadron's role was to guide interceptor aircraft toward unidentified intruders picked up on the unit's radar scopes.

In 1958 Hanna City AFS replaced the AN/FPS-3 with an AN/FPS-20 search radar, and added an AN/FPS-6A height-finder radar. During 1959 the AN/FPS-4 was replaced by a second height-finder radar (AN/FPS-6B), and Hanna City AFS joined the Semi Automatic Ground Environment (SAGE) system, feeding data to DC-07 at Truax Field, Wisconsin. After joining, the squadron was redesignated as the 791st Radar Squadron (SAGE) on 1 November 1959. The radar squadron provided information 24/7 the SAGE Direction Center where it was analyzed to determine range, direction altitude speed and whether or not aircraft were friendly or hostile. On 31 July 1963, the site was redesignated as NORAD ID Z-85.

The 791st Radar Squadron was inactivated on 18 June 1968, and the site was closed on 30 June due to budget reductions. The radar towers and four buildings were transferred to the FAA and site remains an active JSS radar site.

The remainder of the site was then declared excess to GSA on 28 January 1969 and conveyed to the Department of Health, Education and Welfare (HEW) on August 8, 1969. It operated as Hanna City Work Camp, a State of Illinois Department of Corrections minimum security prison. The old USAF buildings are still in use and structures used as observation towers appear to be the old four-legged steel temperate radar towers.

Retrieved from "https://military.wikia.org/wiki/Hanna_City_Air_Force_Station?oldid=3786128"
Community content is available under CC-BY-SA unless otherwise noted.