Harald V (Norwegian pronunciation: [ˈhɑrːɑɫ]; born 21 February 1937) is the King of Norway, having ascended the throne following the death of his father on 17 January 1991.

Harald was the third child and only son of King Olav V of Norway and Princess Märtha of Sweden. He was second in the line of succession at the time of his birth, behind his father. In 1940, as a result of the German occupation during World War II, the royal family went into exile. Harald spent part of his childhood in Sweden and the United States. He returned to Norway in 1945, and subsequently studied for periods at the University of Oslo, the Norwegian Military Academy and Balliol College, Oxford.

In 1957, following the death of his grandfather, Haakon VII, Harald became crown prince. A keen sportsman, he represented Norway in sailing at the 1964, 1968, and 1972 Olympic Games, and later became patron of World Sailing. Harald married Sonja Haraldsen in 1968, their relationship having initially being controversial due to her status as a commoner. The couple had two children, Märtha and Haakon. Harald succeeded his father as king in 1991, with Haakon becoming his heir apparent.

Prince Harald was born at the Skaugum estate and was baptized in the Royal Chapel of the Royal Palace in Oslo on 31 March 1937 by Bishop Johan Lunde. His godparents were: his paternal grandparents King Haakon VII and Queen Maud of Norway, his maternal grandparents Prince Carl and Princess Ingeborg of Sweden, King Leopold III of Belgium, Queen Mary and King George VI of the United Kingdom, and Crown Princess Ingrid of Denmark. His parents already had two daughters, Princess Ragnhild and Princess Astrid.

In 1940 the entire royal family had to flee Oslo because of the German invasion. It was deemed safer for the family to split up. The King and Crown Prince Olav would remain in Norway and the Crown Princess was to make her way to Sweden with the three children. The latter party reached Sweden on the night of 10 April, but although Crown Princess Märtha was Swedish-born, they encountered problems at the border station. According to Princess Astrid and others who were present, they were admitted only after the driver threatened to ram the border gate. Another account does not describe the escape so dramatically.[1] However, when the King and Crown Prince inquired of Swedish foreign minister Christian Günther whether they could sleep one night in Sweden without being interned, they were denied.[1]

Harald spent the following days in Sälen before moving to Prince Carl Bernadotte's home in Frötuna on 16 April. On 26 April the group moved to Drottningholm in Stockholm. King Gustaf V has been accounted to have had an amicable relationship with his Norwegian guests, but the topic of the war in Norway was not to be raised. However, influential Swedish politicians, including Minister of Justice Westman, wanted the Crown Princess and Prince Harald to be sent back to Norway so he could be proclaimed King by the Germans.[1][2] After the King and Crown Prince had to leave Norway on 7 June they felt Sweden might not be the best place for the rest of the family, and started planning for them to go to the United States. On 17 August the Crown Princess and her children left for the United States from Petsamo, Finland, aboard the United States Army transport ship American Legion.[1]

Harald and his mother and sisters lived in Washington, D.C. during the war,[3] while his father, Crown Prince Olav, and his grandfather, King Haakon, stayed in London with the Norwegian government-in-exile. One of the notable events he remembers from that time is standing behind Franklin D. Roosevelt when he was sworn in for his fourth term on the South Portico of the White House in 1945. Such childhood experiences are reflected in a trace of an American accent when he speaks English.[4] The Doris Kearns Goodwin book No Ordinary Time: Franklin and Eleanor Roosevelt and the Home Front in World War II contains a picture of the King (then Prince) playing with FDR's dog, Fala, on the North Lawn of the White House in 1944.

Harald visited Norwegian servicemen training in the United States. The prince also made visits outside America, travelling north to visit Norwegian personnel at the training base "Little Norway" in Ontario, Canada. He attended The White Hall Country School from 1943. Prince Harald returned to Norway with his family at the war's end in 1945.

In the autumn of 1945 he was enrolled in third grade of Smestad skole as the first member of the royal family to attend public school. Amidst this, in 1954 tragedy struck as he lost his mother to cancer and 4 years later in 1958 he would lose his maternal grandmother Princess Ingeborg of Denmark.

In 1955 he graduated from Oslo katedralskole and in the autumn of that year, Harald began studies at the University of Oslo. He later attended the Cavalry Officers' Candidate School at Trandum, followed by enrolment at the Norwegian Military Academy, from which he graduated in 1959. While a student at the academy, he was given the title Crown prince in 1957. Harald attended the Council of State for the first time on 27 September 1957 and took the oath to the Constitution of Norway on 21 February 1958. In the same year, he also served as regent in the King's absence for the first time.

In 1960, Harald entered Balliol College, Oxford where he studied history, economics and politics.[4] He was a keen rower during his student days at Oxford and was taught to row by fellow student and friend Nick Bevan, later a leading British school rowing coach. In 1960, he also made his first official journey abroad, visiting the United States in connection with the fiftieth anniversary of the American Scandinavian Foundation. An avid sailor,[5] Harald represented Norway in the yachting events of Olympic Games in Tokyo in 1964[6] and in Mexico City in 1968[4] and the Munich 1972. The Crown Prince carried the Norwegian flag at the opening parade of the 1964 Summer Olympics.

Harald married a commoner, Sonja Haraldsen, at Oslo Domkirke in Oslo on 29 August 1968. The pair had dated for nine years prior to their marriage and were only allowed to marry when Harald gave his father the ultimatum that if he was not allowed to marry Sonja he would not marry at all, which would have ended the monarchy. The couple have two children, Princess Märtha Louise and Crown Prince Haakon, heir apparent to the Norwegian throne.

On the death of his father on 17 January 1991, Harald succeeded automatically to the Norwegian throne. He became the first Norwegian-born monarch since Magnus VII abdicated in 1343, a gap of 648 years. Harald is the sixth King of Norway to bear that name, and the first in 855 years. The five other kings who have borne the name are Harald Fairhair, Harald Greycloak, Harald Bluetooth, Harald Hardrada, and Harald Gille. Harald Bluetooth is usually not given a number in the Norwegian list of kings, therefore Harald is 'only' numbered as Harald V. King Harald made the decision to use his grandfathers royal motto, «Alt for Norge». The King also chose to continue the tradition of royal benediction, a tradition that had been introduced with this father, and was consecrated together with Queen Sonja in the Nidaros Cathedral on the 23. June 1991.[7] The reign of King Harald has been marked by modernization and reform for the Norwegian Royal family. The King has cooperated closely with Queen Sonja and the Crown Prince in making the royal household more open to the Norwegian public and the Norwegian media. King Harald's decision to accept two more commoners into the royal family, that being Crown Princess Mette-Marit and Ari Behn, has been interpreted as a sign of modernization and adjustment.[8][9] Under King Harald and Queen Sonja's leadership, comprehensive renovation projects on the Bygdøy Royal Estate, the Royal Palace and Oscarshall have also taken place. The latter two have also been opened to the public and tourists.[10]

The King heads the Council of State at the Royal Palace every Friday. He also has weekly meetings with the Prime Minister and the Minister of Foreign Affairs. He receives foreign envoys, and opens parliament every October. According to the Norwegian constitution, he appoints his government. Since 1884 parliamentarism has been in place in Norway, meaning that the government has to have support from Parliament. The King appoints the leader of the parliamentary bloc with majority as prime minister. When the parliamentary situation is unclear the king relies on the advice of the President of Parliament and the sitting prime minister. As the Norwegian head of state, the King formally opens the parliamentary session every autumn, delivering a speech from the throne during each opening. He travels extensively throughout Norway and makes official state visits to other countries as well as receiving and hosting guests.

Twice since the start of the twenty-first century King Harald was unable to perform his monarchical duties due to ill-health: in December 2003 to mid-April 2004 due to urinary bladder cancer, and in April to early June 2005 due to aortic stenosis. Crown Prince Haakon served as the country's regent on both occasions.

King Harald’s leadership during Norwegian national crisis’s, such as New Year's Day Storm and particularly the 2011 attacks, has been met with both national and international acclaim.[12][13][14][15]

In 2015, he became the world's first reigning monarch to visit Antarctica, specifically the Norwegian dependency Queen Maud Land.[16] In 2016, King Harald V competed with a team for the sailing World Championships on Lake Ontario, Toronto.[17] The king came second in the classic fleet category.[18] He was dubbed "Sailor-King" by the Canadian National post as he slept onboard his yacht "Sira".[19]

When the King and Queen turned 80 years in 2017, the King decided to open the former royal stables to the public as a gift to his wife, the Queen. The new venue was named The Queen Sonja Art Stable and is the first institution owned by the royal family which is permanently open to the public.[20] King Harald was made Name of the Year by the newspaper VG in 2017.[21] 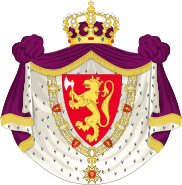 See also: List of honours of the Norwegian Royal Family by country

The King is a four-star general, an admiral, and formally the Supreme Commander of the Norwegian Armed Forces. The infantry battalion His Majesty the King's Guard are considered the King's and the Royal Family's bodyguards. They guard the Royal residences, including the Royal Palace, the Crown Prince Residence at Skaugum, and the Royal Mausoleum at Akershus Castle.