The regular Harpoon uses active radar homing and flies just above the water to evade defenses. The missile can be launched from:

In 1965 the United States Navy began studies for a missile in the 45 kilometres (24 nmi) range class for use against surfaced submarines. The name Harpoon was assigned to the project. The sinking of the Israeli destroyer Eilat in 1967 by a Soviet-built Styx anti-ship missile shocked senior United States Navy officers, who until then had not been conscious of the threat posed by anti-ship missiles. In 1970 Chief of Naval Operations Admiral Elmo Zumwalt accelerated the development of Harpoon as part of his "Project Sixty" initiative, hoping to add much-needed striking power to U.S. surface warships such as theTiconderoga-class cruiser.[citation needed]

The first Harpoon was delivered in 1977; in 2004, Boeing delivered the 7,000th. The Harpoon has also been adapted for carriage on several aircraft, including the P-3 Orion, the P-8 Poseidon, the AV-8B Harrier II, the F/A-18 Hornet and the U.S. Air Force B-52H bombers. The Harpoon was purchased by many American allies, including India, Japan, Singapore, South Korea, Taiwan, the United Arab Emirates and most NATO countries.[citation needed]

The Royal Australian Air Force can fire AGM-84-series missiles from its F/A-18F Super Hornets, F/A-18A/B Hornets, and AP-3C Orion aircraft, and previously from the now retired F-111C/Gs. The Royal Australian Navy deploys the Harpoon on major surface combatants and in the Collins-class submarines. The Spanish Air Force and the Chilean Navy are also AGM-84D customers, and they deploy the missiles on surface ships, and F/A-18s, F-16s, and P-3 Orion aircraft. The British Royal Navy deploys the Harpoon on several types of surface ships.[citation needed]

The Royal Canadian Navy carries Harpoon missiles on its Halifax-class frigates. The Royal New Zealand Air Force is looking at adding the capability of carrying a stand-off missile, probably Harpoon or AGM-65 Maverick, on its six P-3 Orion patrol planes once they have all been upgraded to P3K2 standard.[citation needed]

The Republic of Singapore Air Force also operates five modified Fokker 50 Maritime Patrol Aircraft (MPA) which are fitted with the sensors needed to fire the Harpoon missile. The Pakistani Navy carries the Harpoon missile on its frigates and P-3C Orions. The Turkish Navy carries Harpoons on surface warships and Type 209 submarines. The Turkish Air Force will be armed with the SLAM-ER.[citation needed]

At least 339 Harpoon missiles were sold to the Republic of China Air Force (Taiwan) for its F-16 A/B Block 20 fleet and the Taiwanese Navy, which operates four guided-missile destroyers and eight guided-missile frigates with the capability of carrying the Harpoon, including the eight former U.S. Navy Knox-class frigates and the four former USN Kidd-class destroyers which have been sold to Taiwan. The two Zwaardvis/Hai Lung submarines and 12 P-3C Orion aircraft can also use the missile. The eight Cheng Kung-class frigates, despite being based on the US Oliver Hazard Perry class, have Harpoon capabilities deleted from their combat systems, and funding to restore it has so far been denied.[citation needed]

This version featured a larger fuel tank and re-attack capability, but was not produced in large numbers because its intended mission (warfare with the Warsaw Pact countries of Eastern Europe) was considered to be unlikely following the Dissolution of the Soviet Union. Range is 278 kilometres (173 mi). Block 1D missiles were designated RGM/AGM-84F.[citation needed]

This version, under development[when?], gives the SLAM a re-attack capability, as well as an image comparison capability similar to the Tomahawk cruise missile; that is, the weapon can compare the target scene in front of it with an image stored in its on-board computer during terminal phase target acquisition and lock on (this is known as DSMAC).[citation needed] Block 1G missiles AGM/RGM/UGM-84G; the original SLAM-ER missiles were designated AGM-84H (2000-2002) and later ones the AGM-84K (2002 onwards).[citation needed]

Block 1J was a proposal for a further upgrade, AGM/RGM/UGM-84J Harpoon (or Harpoon 2000), for use against both ship and land targets.[citation needed]

In production at Boeing facilities in Saint Charles, Missouri, is the Harpoon Block II, intended to offer an expanded engagement envelope, enhanced resistance to electronic countermeasures and improved targeting. Specifically, the Harpoon was initially designed as an open-ocean weapon. The Block II missiles continue progress begun with Block IE, and the Block II missile provides the Harpoon with a littoral-water anti-ship capability.[citation needed]

The key improvements of the Harpoon Block II are obtained by incorporating the inertial measurement unit from the Joint Direct Attack Munition program, and the software, computer, Global Positioning System (GPS)/inertial navigation system and GPS antenna/receiver from the SLAM Expanded Response (SLAM-ER), an upgrade to the SLAM.[citation needed]

The US Navy awarded a $120 million contract to Boeing in July 2011 for the production of about 60 Block II Harpoon missiles, including missiles for 6 foreign militaries.[2] Boeing lists 30 foreign navies as Block II customers.[2]

India acquired 24 Harpoon Block II missiles to arm its maritime strike Jaguar fighters in a deal worth $170 million through the Foreign Military Sales system.[4] In December 2010, the Defense Security Cooperation Agency (DSCA) notified U.S. Congress of a possible sale of 21 additional AGM-84L HARPOON Block II Missiles and associated equipment, parts and logistical support for a complete package worth approximately $200 million; the Indian government intends to use these missiles on its Indian Navy P-8I Neptune maritime patrol aircraft.[5] The Indian Navy is also planning to upgrade the fleet of four submarines – Shishumar class – with tube-launched Harpoon missiles.[6]

In early 2018, the U.S. State Department approved the sale of Harpoon Block II to the Mexican Navy for use on their future Sigma-class design frigates, the first of which is being built by Damen Schelde Naval Shipbuilding.[7]

On 18 November 2015, the U.S. Navy tested the AGM-84N Harpoon Block II+ missile against a moving ship target. The Block II+ incorporates an improved GPS guidance kit and a net-enabled data-link that allows the missile to receive in-flight targeting updates. The Block II+ is planned to enter service in 2017.[8]

The USN intends to deploy the Harpoon Block II+ in late FY2018[9] by upgrading its existing inventory of Harpoon IC missiles.[10]

Harpoon Block III was intended to be an upgrade package to the existing USN Block 1C missiles and Command Launch Systems (CLS) for guided missile cruisers, guided missile destroyers, and the F/A-18E/F Super Hornet fighter aircraft. After experiencing an increase in the scope of required government ship integration, test and evaluation, and a delay in development of a data-link, the Harpoon Block III program was canceled by the U.S. Navy in April 2009.[citation needed]

In April 2015, Boeing unveiled a modified version of the RGM-84 it called the Harpoon Next Generation. It increases the ship-launched Harpoon missile's range from the Block II's 70 nmi (81 mi; 130 km) to 167.5 nmi (192.8 mi; 310.2 km), along with a new lighter 300 lb (140 kg) warhead and a more fuel-efficient engine with electronic fuel controls. Boeing offered the missile as the U.S. Navy's Littoral Combat Ship frigate upgrade over-the-horizon anti-ship missile as a cost-effective missile upgrade option; complete Next Gen Harpoons would cost approximately as much as a Block II at $1.2 million each, with upgrades for an existing missile costing half that.[1][11][12] The version is also called the Harpoon Block II + ER.[13] Boeing claims the Block II+ ER is superior to the Naval Strike Missile through its improved turbojet giving it greater range and active radar-homing seeker for all-weather operation, as well as a lighter but "more lethal" warhead.[14] Test shots in 2017 had been confirmed.[15] In May 2017, Boeing revealed it was no longer offering the upgraded Harpoon for the frigate OTH missile requirement, but would continue development of it.[16] 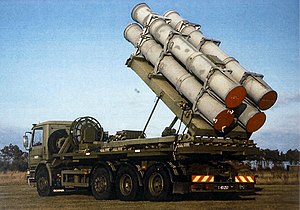 Block I coastal missile defense system truck, in service in the Danish Navy 1988–2003. 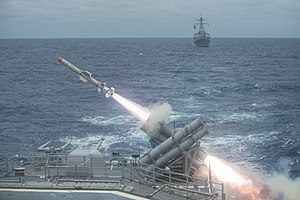 A Harpoon missile is launched from the Ticonderoga-class cruiser USS Shiloh during a live-fire exercise in 2014.
Add a photo to this gallery

In 1981 and 1982 there were two accidental launches of Harpoon missiles: one by the United States Navy which caused no damage and the other by the Danish Navy, which destroyed and damaged buildings in the recreational housing area Lumsås. The Danish missile was later known as the hovsa-missile (hovsa being the Danish term for oops).[citation needed]

In November 1980, during Operation Morvarid, Iranian missile boats attacked and sank two Iraqi Osa-class missile boats; one of the weapons used was the Harpoon missile.[citation needed]

In 1986, the United States Navy sank at least two Libyan patrol boats in the Gulf of Sidra. Two Harpoon missiles were launched from the cruiser USS Yorktown with no confirmed results and several others from A-6 Intruder aircraft that were said to have hit their targets.[17][18] Initial reports claimed that USS Yorktown scored hits on a patrol boat, but action reports indicated that the target may have been a false one and that no ships were hit by those missiles.[19]

In 1988, Harpoon missiles were used by the U.S. to sink the Iranian frigate Sahand during Operation Praying Mantis. Another was fired at the Kaman-class missile boat Joshan, but failed to strike because the fast attack craft had already been mostly sunk by RIM-66 Standard missiles. An Iranian-owned Harpoon missile was also fired at the guided missile cruiser USS Wainwright. The missile was successfully lured away by chaff.[20]

In December 1988, a Harpoon launched by an F/A-18 Hornet fighter from the aircraft carrier USS Constellation[21] killed one sailor when it struck the merchant ship Jagvivek, a 250 ft (76 m) long Indian-owned ship, during an exercise at the Pacific Missile Range near Kauai, Hawaii. A Notice to Mariners had been issued warning of the danger, but Jagvivek left port before receiving the communication and subsequently strayed into the test range area, and the Harpoon missile, loaded just with an inert dummy warhead, locked onto it instead of its intended target.[citation needed]

The UGM-84A undersea-launched Harpoon version was retired from U.S. Navy service in 1997, leaving the U.S. submarine force without an anti-ship missile, a capability that isn't planned to be reintroduced until the Block IV Tomahawk is modified with a moving target maritime attack feature in 2021.[22] During RIMPAC 2018 a UGM-84 Harpoon was fired by USS Olympia at the ex-USS Racine.[23][24] The U.S. Navy plans to contract Boeing in 2019 to refurbish and recertify UGM-84 Harpoon missiles to reintroduce the capability to Los Angeles-class submarines.[25]

In June 2009, it was reported by an American newspaper, citing unnamed officials from the Obama administration and the U.S. Congress, that the American government had accused Pakistan of illegally modifying some older Harpoon missiles to strike land targets. Pakistani officials denied this and they claimed that the US was referring to a new Pakistani-designed missile. Some international experts were also reported to be skeptical of the accusations. Robert Hewson, editor of Jane's Air Launched Weapons, pointed out that the Harpoon is not suitable for the land-attack role due to deficiency in range. He also stated that Pakistan was already armed with more sophisticated missiles of Pakistani or Chinese design and, therefore, "beyond the need to reverse-engineer old US kit." Hewson offered that the missile tested by Pakistan was part of an undertaking to develop conventionally armed missiles, capable of being air- or surface-launched, to counter its rival India's missile arsenal.[26][27][28] It was later stated that Pakistan and the US administration had reached some sort of agreement allowing US officials to inspect Pakistan's inventory of Harpoon missiles,[29][30] and the issue had been resolved.[31]

Retrieved from "https://military.wikia.org/wiki/Harpoon_(missile)?oldid=5286837"
Community content is available under CC-BY-SA unless otherwise noted.