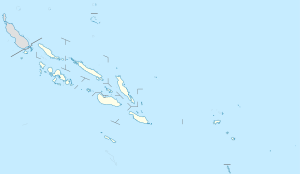 Henderson Field is a former military airfield on Guadalcanal, Solomon Islands during World War II. Originally built by the Japanese, the conflict over its possession was one of the great battles of the Pacific war. Today it is Honiara International Airport.

After the occupation of the Solomon Islands in April 1942, the Japanese military planned to capture Port Moresby in New Guinea and Tulagi in the southern Solomons, extending their southern defensive perimeter establishing bases to support possible future advances. Seizure of Nauru, Ocean Island, New Caledonia, Fiji, and Samoa would cut supply lines between Australia and the United States, with the result of reducing or eliminating Australia as a threat to Japanese positions in the South Pacific.

The airfield on Guadalcanal was first surveyed by Japanese engineers when they arrived in the area in early May, and was known as "Lunga Point", or "Runga Point" to the Japanese, and code named "RXI". The airfield would allow Japanese aircraft to patrol the southern Solomons, shipping lanes to Australia, and the eastern flank of New Guinea.

There were two major construction units involved: 1,379 men in one and 1,145 in another, originally scheduled to work on Midway Island once it was captured, arrived on 6 July 1942, commencing work after 9 July. Construction was observed and reported by Coastwatchers, and the airfield's presence spawned American plans to capture Guadalcanal and use the airfield for Allied aircraft.

About the middle of July, 250 additional civilians of the "Hama Construction Unit" arrived under the command of Inouree Hama, who had had 50 men on Gavutu previously. Also, specialists from the 14th Encampment Corps established radio stations on Tulagi, Gavutu and at RXI. Local labor was also used in the construction.

On 7 August 1942, Allied forces, predominantly United States Marines, landed on the islands of Guadalcanal, Tulagi, and Florida in the southern Solomon Islands with the objective of denying their use by the Japanese to threaten the supply and communication routes between the U.S., Australia, and New Zealand. The Allies also intended to use Guadalcanal and Tulagi as bases to support a campaign to eventually capture or neutralize the major Japanese base at Rabaul on New Britain.

The Allies overwhelmed the outnumbered Japanese defenders and captured Tulagi and Florida, as well as the RXI airfield which was built by the Japanese on Guadalcanal. The captured airfield was named Henderson Field in honor of United States Marine Corps Major Lofton Henderson, commanding officer of VMSB-241 who was killed in action at the Battle of Midway while leading his squadron into action against the Japanese carrier forces thereby becoming the first Marine aviator to perish during the battle.

Surprised by the Allied offensive, the Japanese made several attempts between August and November 1942 to retake Henderson Field. Three major land battles, seven large naval battles (five nighttime surface actions and two carrier battles), and continual, almost daily aerial battles culminated in the decisive Naval Battle of Guadalcanal in early November 1942, in which the last Japanese attempt to bombard Henderson Field from the sea and land enough troops to retake it was defeated.

In December 1942, the Japanese abandoned further efforts to retake Guadalcanal and evacuated their remaining forces by 7 February 1943 in the face of an offensive by the U.S. Army's XIV Corps, conceding the island to the Allies.

Operations after the Battle of GuadalcanalEdit

Reconnaissance work was carried out by specially fitted Navy Liberator bombers operating from Henderson Field on Einwetok and other islands in 1944.[1] NZETC squadrons were using the air base during October and November 1944 for patrols and searches.[2]

Henderson Field was abandoned after the war. The field was modernized and reopened in 1969 as Honiara International Airport, the main airport for the Solomon Islands. In the late 1970s the runway was expanded and lengthened.

Retrieved from "https://military.wikia.org/wiki/Henderson_Field_(Guadalcanal)?oldid=2543615"
Community content is available under CC-BY-SA unless otherwise noted.