For other uses, see Hiroshima (disambiguation).

listen (help·info)) is the capital of Hiroshima Prefecture, and the largest city in the Chūgoku region of western Honshu, the largest island of Japan. It is best known as the first city in history to be targeted by a nuclear weapon when the United States Army Air Forces (USAAF) dropped an atomic bomb on it at 8:15 a.m. on August 6, 1945, near the end of World War II.[1] The city's name, 広島, means "Wide Island" in Japanese.

Hiroshima gained city status on April 1, 1889. On April 1, 1980, Hiroshima became a designated city. Kazumi Matsui has been the city's mayor since April 2011.

Hiroshima was founded on the river delta coastline of the Seto Inland Sea in 1589 by the powerful warlord Mōri Terumoto, who made it his capital after leaving Koriyama Castle in Aki Province.[2][3] Hiroshima Castle was quickly built, and in 1593 Terumoto moved in. Terumoto was on the losing side at the Battle of Sekigahara. The winner, Tokugawa Ieyasu, deprived Mori Terumoto of most of his fiefs including Hiroshima and gave Aki Province to Masanori Fukushima, a daimyo who had supported Tokugawa.[4]

After the han was abolished in 1871, the city became the capital of Hiroshima Prefecture. Hiroshima became a major urban center during the imperial period as the Japanese economy shifted from primarily rural to urban industries. During the 1870s, one of the seven government-sponsored English language schools was established in Hiroshima.[5] Ujina Harbor was constructed through the efforts of Hiroshima Governor Sadaaki Senda in the 1880s, allowing Hiroshima to become an important port city.

The Sanyo Railway was extended to Hiroshima in 1894, and a rail line from the main station to the harbor was constructed for military transportation during the First Sino-Japanese War.[6] During that war, the Japanese government moved temporarily to Hiroshima, and Emperor Meiji maintained his headquarters at Hiroshima Castle from September 15, 1894 to April 27, 1895.[6] The significance of Hiroshima for the Japanese government can be discerned from the fact that the first round of talks between Chinese and Japanese representatives to end the Sino-Japanese War was held in Hiroshima from February 1 to February 4, 1895.[7] New industrial plants, including cotton mills, were established in Hiroshima in the late 19th century.[8] Further industrialization in Hiroshima was stimulated during the Russo-Japanese War in 1904, which required development and production of military supplies. The Hiroshima Prefectural Commercial Exhibition Hall was constructed in 1915 as a center for trade and exhibition of new products. Later, its name was changed to Hiroshima Prefectural Product Exhibition Hall, and again to Hiroshima Prefectural Industrial Promotion Hall.[9]

During World War I, Hiroshima became a focal point of military activity, as the Japanese government entered the war on the Allied side. About 500 German prisoners of war were held in Ninoshima Island in Hiroshima Bay.[10] The growth of Hiroshima as a city continued after the First World War, as the city now attracted the attention of the Catholic Church, and on May 4, 1923, an Apostolic Vicar was appointed for that city.[11]

During World War II, the 2nd General Army and Chugoku Regional Army were headquartered in Hiroshima, and the Army Marine Headquarters was located at Ujina port. The city also had large depots of military supplies, and was a key center for shipping.[12]

The bombing of Tokyo and other cities in Japan during World War II caused widespread destruction and hundreds of thousands of deaths.[13] For example, Toyama, an urban area of 128,000, was nearly fully destroyed, and incendiary attacks on Tokyo claimed the lives of 100,000 people. There were no such air raids in Hiroshima. However, the threat was certainly there and to protect against potential firebombings in Hiroshima, students (between 11–14 years) were mobilized to demolish houses and create firebreaks.[14]

The public release of film footage of the city post attack, and some of the Atomic Bomb Casualty Commission research, about the human effects of the attack, was restricted during the occupation of Japan, and much of this information was censored until the signing of the San Francisco Peace Treaty in 1951, restoring control to the Japanese.[17]

However, worldwide, only the most sensitive, and detailed weapons effects information was censored following the bombing. There was no censorship of accounts written by survivors ("Hibakusha"). For example, the book Hiroshima written by Pulitzer Prize winner John Hersey, was originally featured in article form and published in the popular magazine The New Yorker,[18] on 31 August 1946. It is reported to have reached Tokyo, in English, at least by January 1947 and the translated version was released in Japan in 1949.[19] Despite the fact that the article was planned to be published over four issues, "Hiroshima" made up the entire contents of one issue of the magazine.[20][21] Hiroshima narrates the stories of six bomb survivors immediately prior and for months after the dropping of the Little Boy bomb.[18][22]

The oleander is the official flower of the city of Hiroshima because it was the first to bloom again after the explosion of the atomic bomb in 1945.[23] 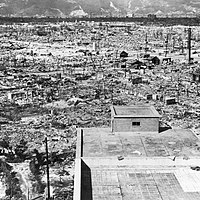 Hiroshima after the bombing

Hiroshima aftermath
Add a photo to this gallery

On September 17, 1945, Hiroshima was struck by the Makurazaki Typhoon (Typhoon Ida). Hiroshima prefecture suffered more than 3,000 deaths and injuries, about half the national total.[24] More than half the bridges in the city were destroyed, along with heavy damage to roads and railroads, further devastating the city.[25]

Hiroshima was proclaimed a City of Peace by the Japanese parliament in 1949, at the initiative of its mayor, Shinzo Hamai (1905–1968). As a result, the city of Hiroshima received more international attention as a desirable location for holding international conferences on peace as well as social issues. As part of that effort, the Hiroshima Interpreters' and Guide's Association (HIGA) was established in 1992 in order to facilitate interpretation for conferences, and the Hiroshima Peace Institute was established in 1998 within the Hiroshima University. The city government continues to advocate the abolition of all nuclear weapons and the Mayor of Hiroshima is the president of Mayors for Peace, an international mayoral organization mobilizing cities and citizens worldwide to abolish and eliminate nuclear weapons by the year 2020.[28][29]

Hiroshima is situated on the Ōta River delta, on Hiroshima Bay, facing the Seto Inland Sea on its south side. The river's six channels divide Hiroshima into several islets.

Hiroshima has a humid subtropical climate characterized by mild winters and hot humid summers. Like much of the rest of Japan, Hiroshima experiences a seasonal temperature lag in summer, with August rather than July being the warmest month of the year. Precipitation occurs year-round, although winter is the driest season. Rainfall peaks in June and July, with August experiencing sunnier and drier conditions.

Hiroshima's rebuilt castle (nicknamed Rijō, meaning Koi Castle) houses a museum of life in the Edo period. Hiroshima Gokoku Shrine is within the walls of the castle. Other attractions in Hiroshima include Shukkei-en, Fudōin, Mitaki-dera, and Hijiyama Park.

Hiroshima is known for okonomiyaki, cooked on a hot-plate (usually in front of the customer). It is cooked with various ingredients, which are layered rather than mixed together as done with the Osaka version of okonomiyaki. The layers are typically egg, cabbage, bean sprouts (moyashi), sliced pork/bacon with optional items (mayonnaise, fried squid, octopus, cheese, mochi, kimchi, etc.), and noodles (soba, udon) topped with another layer of egg and a generous dollop of okonomiyaki sauce (Carp and Otafuku are two popular brands). The amount of cabbage used is usually 3 to 4 times the amount used in the Osaka style, therefore arguably a healthier version. It starts out piled very high and is generally pushed down as the cabbage cooks. The order of the layers may vary slightly depending on the chef's style and preference, and ingredients will vary depending on the preference of the customer.

Within Japan, Hiroshima has a similar relationship with Nagasaki.

Works related to at Wikisource

Retrieved from "https://military.wikia.org/wiki/Hiroshima?oldid=5444272"
Community content is available under CC-BY-SA unless otherwise noted.