The Houston Volunteers were a group of 1,000 men[1] who volunteered for U.S. Navy service to avenge the loss of heavy cruiser USS Houston (CA-30) after the ship was sunk by the Imperial Japanese Navy on 1 March 1942 in the Battle of Sunda Strait.[2] 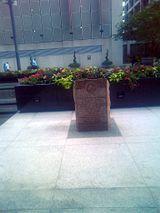 Front View of the Memorial.

Back View of the Memorial.

Top View of the Memorial.
The Memorial erected on the occasion of Induction of Houston Volunteers.

A drive in May 1942 for volunteers to replace the men lost on Houston culminated in the acceptance of 1,650 men for service in the Navy. A limit of 1,000 was set for the "Houston Volunteers" group.[1] At the same time, war bond subscriptions totaling $85,000,000[3] were raised to completely pay for another ship named for the city, the eventual Houston (CL-81), with enough left over to pay for aircraft carrier San Jacinto (CVL-30).[4]

At 6 pm[5] on Memorial Day, 30 May 1942, a mass rally and induction ceremony took place in downtown Houston, the namesake city for the lost ship. The 1,000-man "Houston Volunteers" paraded with several hundred Navy officers and men through downtown Houston, and were accompanied by four bands. Forty-eight bombers based at nearby Ellington Field overflew the festivities.[6] After the parade, the volunteers lined up on Main Street in rows 16 abreast and were administered the Navy Oath by Rear Admiral William A. Glassford, who then gave a speech describing Houston's final battle.[5] A message from President Franklin Roosevelt, who had taken several pre-war cruises on the ship, was read by Mayor of Houston Neal Pickett.[1]

A crowd estimated at 150,000[3] to 200,000[7] witnessed the ceremony. After a 60-foot model of Houston was dedicated, the crowd saw off the departing inductees, who immediately marched to Union Station to travel to training in San Diego on five special trains.[5]

One young man, Robert E. Bradley, was 16 and too young to enlist, but was nonetheless still allowed to participate because his older brother Leonard was lost when Houston (CA-30) went down.[8] He was sworn in on the train three days later when he turned 17[3] by Lt. Cmdr. Simon L. Shade, the same officer who had sworn in his older brother two years before.[8]

On 3 August 1942 the keel for Liberty ship SS Houston Volunteers (MC Hull #110), named in honor of the group of volunteers, was laid at the Todd Houston Shipyard.[10] Houston Volunteers was delivered on 28 October 1942[10] and served in the Mediterranean during World War II.[11]

On 11 November 1995, a memorial to Houston (CA-30) was dedicated near the spot where the "Houston Volunteers" were inducted.[12] The monument design features the ship’s bell, which was recovered by divers after the end of the war.[13]

</dl>
Retrieved from "https://military.wikia.org/wiki/Houston_Volunteers?oldid=5119496"
Community content is available under CC-BY-SA unless otherwise noted.