The Hyde Park and Regent's Park bombings occurred on 20 July 1982 in London. Members of the Provisional Irish Republican Army (IRA) detonated two bombs during British military ceremonies in Hyde Park and Regent's Park, both located in central London. The explosions killed a total of 11 military personnel: four soldiers of the Blues & Royals and seven bandsmen of the Royal Green Jackets. Seven of the Blues & Royals' horses also died in the attack. One seriously injured horse, Sefton, survived and was subsequently featured on a number of television programmes and was awarded "Horse of the Year". Sefton's rider also survived but suffered from posttraumatic stress disorder and in 2012 committed suicide after killing his two children.

In 1987, Gilbert "Danny" McNamee was convicted of making the Hyde Park bomb and jailed for 25 years. He served 12 years before being released under the terms of the Good Friday Agreement; his conviction was later quashed. In 2013, John Downey was charged with four counts of murder in relation to the Hyde Park attack. 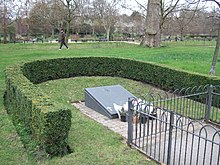 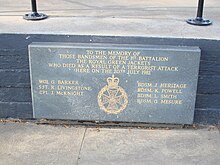 The first attack was a large nail bomb hidden in a blue Austin car parked on South Carriage Drive in Hyde Park, along the route used by the Household Cavalry – Queen Elizabeth II's official bodyguard regiment – during the Changing of the Guard procession from their barracks in Knightsbridge to Buckingham Palace. Three soldiers of the Blues & Royals were killed instantly, and another died three days later from his injuries. The other soldiers in the procession were all badly wounded and shrapnel and nails sprayed into the crowd of tourists assembled to watch the parade, causing further injuries. Seven of the regiment's horses were also killed or had to be euthanised because of their injuries.

Explosives experts believed that the Hyde Park bomb was a remote-detonated improvised explosive device, which was exploded at just the right time to catch the parade. The four men who died in the attack were Roy John Bright, Dennis Richard Anthony Daly, Simon Andrew Tipper and Geoffrey Vernon Young.

A second explosion occurred just over two hours later, when a bomb hidden underneath the bandstand in Regent's Park exploded during a performance of the music from Oliver! by the Royal Green Jackets band to a crowd of 120 people. Here too, the crowd was peppered by shrapnel from the iron bandstand, causing dozens of injuries amongst the audience, as well as killing seven members of the band and wounding the rest. The blast was so powerful that one of the bodies was thrown onto an iron fence 30 yards away.

The bomb was thought to have been placed under the stand weeks in advance, with a timer set to the date and time of the advertised concert. The seven men who died were Graham Barker, Robert Livingstone, John McKnight, John Heritage, George Mesure, Keith Powell and Laurence Smith.

The IRA claimed responsibility for the attack by deliberately mirroring prime minister Margaret Thatcher's words just a few months previously when Britain entered the Falklands War. They proclaimed that: "The Irish people have sovereign and national rights which no task or occupational force can put down". Reacting to the bombing, Thatcher stated: "These callous and cowardly crimes have been committed by evil, brutal men who know nothing of democracy. We shall not rest until they are brought to justice."[2]

Sefton, a horse that survived the attack at Hyde Park despite incurring serious injuries, became well-known due to the Horse of the Year Show, where he was awarded "Horse of the Year", and his numerous television appearances.[3][4] Sefton's rider at the time of the bombing, Michael Pedersen, survived but claimed to suffer from posttraumatic stress disorder; after splitting from his wife he committed suicide in September 2012 after killing his two children.[5]

A memorial marks the place of the Hyde Park explosion and the troop honours it daily with an eyes-left and salute with drawn swords. A plaque commemorating the victims of the second attack also stands in Regent's Park.

The character Joe in the 1993 play Our Boys is a survivor of the Hyde Park bomb attack.

In 1987, 27-year-old Gilbert "Danny" McNamee was sentenced at the Old Bailey to 25 years in prison for his role in the Hyde Park bombing despite his plea that he was innocent. In 1998, shortly after his release under the Good Friday Agreement, an appeal judge quashed his conviction, deeming it "unsafe" because of withheld fingerprint evidence that implicated other bomb-makers.

On 19 May 2013, 61-year-old John Anthony Downey was charged with murder in relation to the Hyde Park bomb and intending to cause an explosion likely to endanger life. He appeared via videolink from Belmarsh prison for a bail hearing at the Old Bailey on 24 May and did not apply for bail so was remanded in custody.[6] At a hearing on 1 August, Downey was granted conditional bail and a trial was scheduled for 14 January 2014.[7]

Retrieved from "https://military.wikia.org/wiki/Hyde_Park_and_Regent%27s_Park_bombings?oldid=4175996"
Community content is available under CC-BY-SA unless otherwise noted.