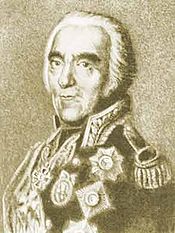 Count Ivan Vasilyevich Gudovich (Russian, in full: граф Иван Васильевич Гудович) (1741–1820) was a Russian noble and military leader of Ukrainian descent. His exploits included the capture of Khadjibey (1789) and the conquest of maritime Dagestan (1807).

Ivan's father was an influential member of the Ukrainian Cossack starshina. He sent his sons to be educated abroad, at the Königsberg Albertina University and the University of Leipzig. Upon coming to St Petersburg in 1759, Gudovich joined the Russian Army, hoping to benefit from the favours enjoyed by his elder brother, Andrey, an aide-de-camp to Peter III.

Upon the latter's dethronement in 1762, the Gudovich brothers were apprehended and briefly imprisoned. It was during the Russo-Turkish War, 1768-1774 that Ivan Gudovich rose to prominence and greatly distinguished himself at Khotyn, Larga, and Kagul. The next ten years were spent in half-military, half-administrative work in Ryazan, Tambov, and Podolia.

Gudovich won a European reputation for a series of brilliantly conducted sieges during the Russo-Turkish War, 1787-1792. In 1789 he succeeded in taking the citadel of Khadjibey, which would be renamed Odessa by the imperial administration. He proceeded to capture Kilia, a strong fortress commanding the Danube Delta. When he prepared to lay siege to Izmail, Prince Potemkin had him replaced with Suvorov. Thereupon Gudovich moved to the Caucasian front, where he stormed the most important Ottoman stronghold, Anapa, and took prisoner its garrison of 13,000 soldiers.

In the wake of such a glorious success, Gudovich's capacity for supreme command could hardly be doubted. He aspired to lead the projected Russian invasion of Persia but the supreme command was given to a young and unexperienced courtier, Valerian Zubov. Embittered, Gudovich entertained plans of retiring from active service. While he was on his furlough, the Empress died and her successor Paul, recalling Ivan's allegiance to his father, had Zubov replaced with Gudovich, who was also made count.

By that time, the Persian expedition was over and Gudovich prepared to lead the Russian armies to combat Revolutionary France on the Rhine. The project was abandoned within months, and Gudovich had to languish in retirement until the outbreak of the new war with Persia. Named commander-in-chief in the Caucasus in 1806, Gudovich led the Russian armies to the Caspian Sea, overunning the khanates of Derbent, Sheka, and Baku on his way. After the 24,000-strong army of Yusuf Pasha was routed in the Battle of Arpachai, Gudovich was promoted Field Marshal. However, the battle cost him an eye and left him incapacitated for effective command. In 1808, the ailing general failed to take Erivan and retreated with his soldiers to Georgia.

Frustrated with the latest failure, Gudovich laid down all his offices and retired from the army to Moscow, which he governed for three more years, until advanced age forced him to retire to his enormous estates in Podolia, mostly inherited from a father-in-law, Count Kirill Razumovsky. Gudovich died aged 80 and was buried, according to his own wishes, at the Saint Sophia Cathedral in Kiev.

Retrieved from "https://military.wikia.org/wiki/Ivan_Gudovich?oldid=4331446"
Community content is available under CC-BY-SA unless otherwise noted.