Born at Gormanston Castle, County Meath, he was son and heir of Edward Preston, 13th Viscount Gormanston by his wife Lucretia, daughter of William Charles Jerningham.[1]

He joined the 60th King's Royal Rifle Corps in 1855, and served as a Lieutenant during the Indian Rebellion of 1857, before retiring from the British Army in 1860.

Jenico Preston then held the ceremonial posts of High Sheriff of County Dublin (1865), County Meath (1871) before being appointed Chamberlain to the Lord Lieutenant of Ireland, the Marquess of Abercorn, between 1866 and 1868. He succeeded his father as viscount in 1876, and entered the House of Lords in the subsidiary title of Baron Gormanston, created for his father in the Peerage of the United Kingdom in 1868.

Lord Gormanston married firstly Hon. Ismay Louisa Ursula Bellew, daughter of Patrick Bellew, 1st Baron Bellew, in 1861; they had no children. After his first wife's death in 1875 he married secondly Georgina Jane Connellan, daughter of Major Peter Connellan, in 1878; they had three sons and one daughter. Lord Gormanston died at Dublin in October 1907, aged 70, and was succeeded in his titles by his eldest son Jenico Edward Joseph Preston, 15th Viscount Gormanston.[2] 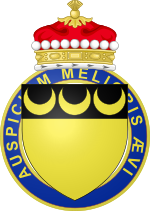 Retrieved from "https://military.wikia.org/wiki/Jenico_Preston,_14th_Viscount_Gormanston?oldid=5397752"
Community content is available under CC-BY-SA unless otherwise noted.