Military Wiki
Register
Don't have an account?
Sign In
Advertisement
in: Articles with German-language external links, Articles incorporating text from Wikipedia, German inventions of the Nazi period,
and 2 more

A jerrycan (also written as jerry can or jerrican) is a robust fuel container originally made from pressed steel. It was designed in Germany in the 1930s for military use to hold 20 liters (5.3 U.S. gal) of fuel. The development of the jerrycan was a significant improvement on earlier designs, which required tools and funnels to use.

Today similar designs are used for fuel and water containers, some of which are also produced in plastic. The designs usually emulate the original steel design and are still known as jerrycans, although they have also been called "jerryjugs". Generally their use is denoted by the coloring, and occasionally, imprinted labeling on the container itself. This is to prevent the mixture of different fuels, as well as preventing water containers from being contaminated with fuel or vice versa.

The US version of the jerrycan is covered by military specification MIL-C-1283[1] and has been produced since the early 1940s by a number of US manufacturers, according to a current manufacturer, Blitz.[2] The National Stock Number is 7240-00-222-3088. It is considered obsolete by a new A-A-59592A specification, having been replaced with plastic versions.

As of January 10, 2009 all portable fuel containers are required to conform to two new regulations:[3]

These new regulations do not apply to OSHA-approved metal safety containers, but rather to the common red plastic, portable gas cans. The regulations apply only to newly manufactured gasoline cans, and there is no requirement on the part of users to discard their existing cans or to upgrade, although the EPA provides informational resources for implementing community Gas Can Exchange Programs.[6]

The transportation of dangerous goods (which includes liquid fuels) within Europe is governed by the European Agreement concerning the International Carriage of Dangerous Goods by Road (ADR).[7] A jerrican is defined within Chapter 1.2 of the 2011 ADR as "a metal or plastics packaging of rectangular or polygonal cross-section with one or more orifices", a definition which includes the traditional jerrycan but which also covers a wide range of other packagings.

The ADR sets performance standards for packaging and specifies what standard of packaging is required for each type of dangerous good, including gasoline/petrol and diesel fuels. The traditional jerrycan is available in UN-marked approved versions which satisfy the requirements of the ADR.

The history of the Jerrycan is notable because the German design was reverse engineered and subsequently copied by the allies during World War II. The name of the jerrycan refers to its German origins, Jerry being wartime slang for Germans.[8]

The Wehrmacht-Einheitskanister, as it was known in Germany, was first developed in 1937 by the Müller engineering firm in Schwelm to a design by their chief engineer Vinzenz Grünvogel.[9] By 1939 the German military had thousands of such cans stockpiled in anticipation of war. Motorized troops were issued with the cans and lengths of rubber hose in order to siphon fuel from any available source to aid their rapid advance through Poland at the start of World War II.[10]

In 1939, an American engineer named Paul Pleiss had built a vehicle to journey to India with his German colleague. After building the car, they realized they didn't have any storage for emergency water. The German engineer had access to the stockpile of jerrycans at Berlin Tempelhof Airport and managed to take three of them. They drove across 11 national borders without incident until Field Marshal Goering sent a plane to take the engineer home. The German engineer also gave Pleiss complete specifications for the manufacture of the can.[10] Pleiss continued on to Calcutta, put his car in storage, and flew back to Philadelphia, where he told American military officials about the can. He could raise no interest.[10] Without a sample, he realized he could not get anywhere. He eventually shipped the car to New York by a roundabout method, and sent a can to Washington. The War Department decided instead to use World War I ten-US gallon cans with two screw closures, which required both a wrench and funnel for pouring.[10]

The one jerrycan in American possession was sent to Camp Holabird, Maryland, where it was poorly redesigned. The new design only retained the handles, size and shape. The weld was replaced with rolled seams which were prone to leakage, the lining was removed and it now required a wrench and a funnel.[10]

The original design proved far superior and these fuel containers were subsequently used in all theatres of war around the world.[10] Such was the importance of the cans in the war effort that President Roosevelt noted "Without these cans it would have been impossible for our armies to cut their way across France at a lightning pace which exceeded the German Blitzkrieg of 1940."[9] 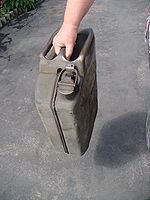 Carried by one person 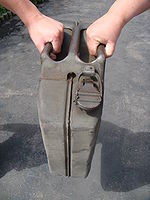 Carried by two people
Methods of carrying a jerrycan

At the beginning of the Second World War, the British Army were equipped with simple rectangular fuel containers: a 2 Imperial gallon (9 litres) container made of pressed steel and a 4 gallon (18 litres) container made from tin plate. While the 9 litre - 2 gallon containers were relatively strong, they were expensive to produce. The 18 litre - 4 gallon containers, which were mainly manufactured in the third world, were cheap and plentiful but they were not very robust. Consequently they were colloquially known as flimsies.

While adequate for transportation by road in Europe, the flimsies proved to be extremely unsatisfactory during the North African Campaign and severely hampered the operation of the British 8th Army. The transportation of fuel over rough terrain often resulted in much of the fuel being lost as the containers were easily punctured. The resultant leakages also made the transportation vehicles liable to fuel fires.

When the British Army first saw the German fuel cans during the invasion of Norway in 1940, the British immediately saw the advantages of the superior design. The containers had three handles on them which allowed easy handling by one or two people or to be moved bucket brigade-style. The handle design also allows for two empty cans to be carried in each hand.

The sides of the can were marked with cross-like indentations that strengthened the can while allowing the contents to expand, as did an air pocket under the handles when the can was filled correctly. Rather than a screw cap, the containers used a cam lever release mechanism with a short spout secured with a snap closure and an air-pipe to the air pocket which enabled smooth pouring (which was omitted in some copies). The interior was also lined with an impervious plastic, first developed for steel beer barrels that would allow the can to be used for either water or gasoline. The can was welded, and had a gasket for a leak-proof mouth. The British used cans captured from the "Jerries" (Germans) — hence "jerrycans" — in preference to their own containers as much as possible. Later in 1940 Pleiss was in London, and British officers asked him about the design and manufacture of the jerrycan. Pleiss ordered the second of his three jerrycans flown to London.[10]

The strength of the Wehrmachtskanister had been realized in the Soviet Union. Its design has been copied and the Soviet Army accepted it as the standard container for liquids. This container is still being produced and used in modern Russia. In civilian use this container is used primarily for automotive fuel and lubricants.[11]