Military Wiki
Register
Don't have an account?
Sign In
Advertisement
in: Articles incorporating text from Wikipedia, Commands of the United States Armed Forces, Military units and formations in Hawaii,
and 3 more 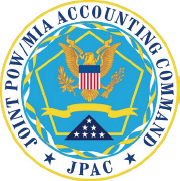 The Joint POW/MIA Accounting Command (often referred to as JPAC) is a joint task force within the United States Department of Defense (DOD) whose mission is to account for Americans who are listed as Prisoners Of War (POW), or Missing In Action (MIA), from all past wars and conflicts. It has been especially visible in conjunction with the Vietnam War POW/MIA issue. The mission of the Joint POW/MIA Accounting Command is to achieve the fullest possible accounting of all Americans missing as a result of the nation's past conflicts.[1] The motto of JPAC is “Until they are home”.

JPAC is a standing joint task force within the United States Pacific Command. Its headquarters is located at Joint Base Pearl Harbor-Hickam in Hawaii. In DOD terminology, “joint” means the organization comprises members from two or more Military Departments (Army, Navy,or Air Force).

JPAC maintains three permanent overseas detachments and two local detachments devoted to the ongoing tasks of POW/MIA accounting. Each detachment is under the command of a field grade officer of the United States armed forces.

JPAC investigates leads concerning Americans who were killed in action but were never brought home. This process involves close coordination with other U.S. agencies involved in the POW/MIA issue. JPAC carries out technical negotiations and talks with representatives of foreign governments around the world in order to ensure positive in-country conditions are maintained or created for JPAC investigative and recovery operations wherever JPAC teams deploy in the world. If enough evidence is found, a site will be recommended for recovery.

JPAC has 18 Recovery Teams whose members travel throughout the world to recover missing from past wars. A typical recovery team is made up of 10 to 14 people, led by a team leader and a forensic anthropologist. Other members of the team typically include a team sergeant, linguist, medic, life support technician, forensic photographer, RF systems communications technician/operator and an explosive ordnance disposal technician. Additional experts are added to the mission as needed, such as mountaineering specialists or divers. The team carefully excavates the site and screens the soil to locate all possible remains and artifacts. In the case of an airplane crash, a recovery site may be quite large. Once the recovery effort is completed, the team returns to Hawaii. All remains and artifacts found during the recovery operation are then transported from a U.S. military plane to JPAC’s Central Identification Laboratory.

Upon arrival at the laboratory, all remains and artifacts recovered from a site are signed over to the custody of the CIL and stored in a secure area. Forensic anthropologists carefully analyze all remains and artifacts to determine the sex, race, age at death, and height of the individual. Anthropologists may also analyze trauma caused at or near the time of death and pathological conditions of bone such as arthritis or previous healed breaks. Lab scientists use a variety of techniques to establish the identification of missing Americans, including analysis of skeletal and dental remains, sampling mitochondrial DNA (mtDNA), and analyzing material evidence, personal effects, aviation life-support equipment (gear used by aircrew: helmets, oxygen masks, harnesses, etc.), or other military equipment.

Often, recovered military and personal equipment artifacts are forwarded to the USAF Life Sciences Equipment Laboratory (LSEL, located at Brooks City-Base, in San Antonio, TX), for advanced scientific and historical analysis. The LSEL (a highly unique scientific facility within the US and the world) is singularly qualified to scientifically study recovered military equipment artifacts and determine critical forensic aspects, to include, but not limited to: number of unaccounted for personnel represented at the loss site (i.e. 2 aviators), branch of military service represented (i.e. Navy), vehicle type represented (i.e. F-4 aircraft type), time frame represented (i.e. c. 1967), and represented levels of survivability (i.e. any evidence of fatal/non-fatal status). Frequently, the LSEL is able to provide crucial case determinations (through analysis of recovered equipment artifacts) when other critical evidence (such as human remains: bone or teeth) is not recovered or available, and/or does not yield any substantial conclusions through testing (i.e. DNA testing).

The recovery and identification process may take years to complete. In addition to the factors previously mentioned, each separate line of evidence must be examined at the CIL (bones, teeth, and material evidence) and correlated with all historical evidence. All reports undergo a thorough peer review process that includes an external review by independent experts. Additionally, if mtDNA is part of the process, the search for family reference samples for mtDNA comparison can add a significant amount of time to the identification process. Completed cases are forwarded to the appropriate service Mortuary Affairs office, whose members personally notify next-of-kin family members.

JPAC conducts a number of missions each year in its ongoing efforts. The missions per year for individuals missing for each war:

In 2007 a JPAC team led by Maj. Sean Stinchon visited Iō-tō (formerly Iwo Jima)[4] to hunt for the remains of Marine Sergeant Bill Genaust. He was the Marine combat photographer (motion picture cameraman) who was standing next to Joe Rosenthal, who filmed the Raising the Flag on Iwo Jima during the World War II invasion of the island. The team identified two possible cave entrances that may contain Genaust's remains. The JPAC team hopes to return and properly search the tunnels to possibly locate the remains of Sergeant Genaust, and those of other unaccounted for Marines.[5]

An internal JPAC report, obtained by the Associated Press in July 2013, said that JPAC is 'acutely dysfunctional' and close to 'total failure'.The report cited JPAC’s management as being “so inept, mismanaged and wasteful that it risks descending from dysfunction to total failure.” The report says “the decades-old pursuit of bones and other MIA evidence is sluggish, often duplicative and subjected to too little scientific rigor”. The report notes that the JPAC Command is “woefully inept and even corrupt”. The report notes that in recent years the process by which the JPAC Laboratory field recovery teams gathers bones and other material useful for identifications has “collapsed” and is now “acutely dysfunctional.” The report concludes that absent prompt and significant change, “the descent from dysfunction to total failure … is inevitable.” It accused the Command of maintaining inadequate databases of missing personnel, relying on unreliable maps, wasting money on unnecessary and useless travel and drastically failing to achieve targets set by the US Congress. It said the organization paid out hundreds of thousands of pounds to North Korea to "recover" the remains of fallen US servicemen whose bodies had been planted on former battlefields, and even used as laboratory skeletons. In the report is was revealed that the average length of time for the JPAC laboratory to identify casualties increased from slightly over 4 years in 2005 to 11 years in 2011 for each set of remains that are recovered.[6]

A contrary viewpoint, expressed by author Wil S. Hylton, holds that while the command has suffered from bureaucratic tendencies, "it is flat-out wrong to dismiss the work of JPAC as a failure. For every instance in which the unit moves more slowly than it could, there are many cases where JPAC field teams have delivered answers to a family that would otherwise be lost forever."[7]

Multiple government investigations into JPAC were initiated in 2013, including ongoing Congressional hearings in both the House and Senate. Information regarding these efforts and investigative reports from the news media are cited in the External Links Section below.