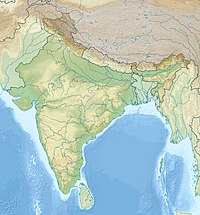 Kalaikunda Air Force Station is an Indian Air Force Base near Kharagpur, located in the Midnapore West district of the state of West Bengal. It is the home of No. 18 Squadron IAF , the Flying Bullets. The squadron flies the Indian license-built Mikoyan MiG-27ML.

Air Force Station Kalaikunda was built by the British for the Royal Indian Air Force during World War II. It was used to conduct raids against advancing Japanese in Burma and also for operations to transport aid to parts of China.

It was originally designed for B-24 Liberator use. In 1943, it was designated as a B-29 Superfortress Base for the planned deployment of the United States Army Air Forces XX Bomber Command to India. Advance Army Air Forces echelons arrived in India in December 1943 to organize the upgrading of the airfield and thousands of Indians labored to upgrade the facility for Superfortress operations. It was one of four B-29 bases established by the Americans in India.

When the XX Bomber Command arrived at Kalaikunda in late March 1944, the conditions at the base were poor, and the runways were still in the process of being lengthened when the first B-29s arrived. Along with Command Headquarters, Kalaikunda was also the headquarters of the 58th Bombardment Wing, which arrived in late April.

Initially, the 468th hauled bombs, fuel, ammunition and spare parts 1,200 miles to its forward staging base at Pengshan Airfield (A-7), Pengshan, Szechwan Provience, China. Six round trips were necessary to deliver enough fuel for one airplane to mount a combat mission from China - an impractical logistics concept for an aerial campaign, particularly with an airplane plagued with an unreliable engine.

On June 5, 1944, the 468th flew its first operational mission from Kalaikunda against railroad yards at Bangkok, Thailand. Ten days later, flying from field A-7, the 468th bombed the Imperial Iron & Steel Works, Yawata, Japan - the opening of the B-29 phase of the Air Offensive against Japan. Within a year, it participated in eight campaigns and earned three Distinguished Unit Citations.

From June 1944 until May 1945, operating at maximum range, the 468th conducted aerial reconnaissance and bombardment operations from India and China against Japanese targets in Japan, Manchuria, China, Taiwan, Burma, the Malay Peninsula, Singapore and Sumatra. Sixteen-hour combat missions were common; the longest 21. Weather, terrain and the enemy were equally unforgiving. The B-29 was still being "invented" and its operational tactics had to be proved while the airplane was being de-bugged in the face of the enemy.

In July 1944, U. S. Marines invaded the Mariana Islands and as soon as West Field, Tinian, was readied in May 1945, the group flew to West Field and continued the Air Offensive against Japan.

After May 1945 the fighter squadrons were in training; in June the group's C-47's were sent to Ledo to move road-building equipment; during June— July most of its L-5's were turned over to Fourteenth Air Force in China.

The air base at Kalaikunda will play an extremely crucial role in the country's defences. Aircraft based here will be involved in air defence over the strategic Andaman and Nicobar Islands and the Bay of Bengal. The tri-services command at the A&N Islands will be in charge of the squadrons of Su-30 MKIs and other advanced aircraft based at Kalaikunda for this specific purpose. This decision was taken when plans for basing Sukhois in the Andamans got scuttled after the 2004 tsunami in which the IAF lost assets. "Till now, Kalaikunda - while performing several other duties - has been a bridge with the Andamans. The role of the base will grow and aircraft based here will play a vital role in patrolling the skies over the Andamans and the Bay of Bengal. Kalaikunda will play several roles that include air defence, training and building better co-operation in the region for a possible Nato-like alliance with India playing the pivotal role," an official said.[1]

The Kalaikunda airbase is nestled among forests of Sal in the Maoist badlands of West Midnapore. Set up by the Americans for its Superfortress bombers operating during the Burma campaign, the facility has grown steadily in importance over the years. "A large area falls within the responsibility of this base. There are several bases in the northeast but along the eastern coast, the closest one is in Chennai. It is our job to handle the defences along the coast and the Bay of Bengal region. We play host to several foreign air forces interested in joint exercises with the IAF," the official added.[1]

"This is a very compact base built in classical American style. The Americans used to operate flights from Kalaikunda, Dudhkundi and Salua. Today, we have a radar station at Salua and Dudhkundi has been converted into an air-to-ground firing range. Over the years, Kalaikunda has developed into a major location for international air exercises. The base is close to Bay of Bengal where air-to-air firing can take place," says Air Commodore R Radhish, AOC, Air Force Station, Kalaikunda.[1]

But Kalaikunda goes well beyond an exercise hub. Apart from the MiG-27 ground attack aircraft and MiG-21 Fn fighters of the OCU, squadrons of Su-30 MKIs and other advanced varieties from the IAF's fleet call on Kalaikunda on a regular basis. A squadron of Su-30 MKIs is now at the base.[1]

Now Indian Air Force agreeing to allow civil aircraft to use the runway at its existing fighter base. According to IAF sources, plans have moved ahead and the civilian terminal might soon start serving not only Bengal, but also Jharkhand and Orissa. The state government has already engaged an agency that is in touch with us. We have no problems if civilian aircraft use our runway and then move to a separate terminal to the south of the existing military facility. All that needs to be built is a high-speed corridor from the runway to a civilian terminal for which land is available. This corridor will pass under NH6 (Mumbai Road) and the railway tracks in the Kharagpur-Tata section of South Eastern Railway [1]

Retrieved from "https://military.wikia.org/wiki/Kalaikunda_Air_Force_Station?oldid=4234521"
Community content is available under CC-BY-SA unless otherwise noted.