The history of Latin America during World War II is important because of the significant economical, political, and military changes that occurred throughout much of the region as result of the war. In order to better protect the Panama Canal, combat Axis influence, and optimize the production of goods for the war effort, the United States through Lend-Lease and other similar programs greatly expanded its interests in Latin America, resulting in large-scale modernization and a major economic boost for the countries that participated.[1] Strategically, Panama was the most important Latin American nation to the Allies because of the Panama Canal, which provided a link between the $3 and Pacific Oceans that was vital to both commerce and defense. Brazil was also of great importance because of its location as the closest point in the Americas to Africa, where the Allies were actively engaged in fighting the Germans and Italians. For the Axis, the Southern Cone nations of Argentina and Chile were where they found most of their support, and they utilized it to the fullest by interfering with internal affairs, conducting espionage, and distributing propaganda.[1][2][3]

According to author Thomas M. Leonard, World War II had a major impact on Latin American economies. Following the Japanese attack on Pearl Harbor, on December 7, 1941, most of Latin America either severed relations with the Axis powers or declared war on them. As result of which, many nations - including all of Central America, the Dominican Republic, Mexico, Chile, Peru, Argentina, and Venezuela - suddenly found that they were now dependent on the United States for trade. Moreover, the United States' need for particular products during the war further distorted trade. For example, the United States wanted all of the platinum produced in Colombia, all of Chile's copper, and all of Peru's cotton. Set prices, often with a high premium, were agreed upon, but the various nations lost their ability to bargain and trade in the open market. Shortages of consumer goods and other products was also a problem during the war years. The demands of the American war industry and a shortage of shipping meant that goods were simply not available, and so the prices for what was available increased. Gas and other oil products were difficult to find and very expensive, and food shortages were a problem in the cities. Ultimately, all of these factors resulted in inflation.[1]

Most of Latin America used the war to their advantage by complying with the United States and receiving aid. Peru, for example, was one exception. In Peru, the government placed price control on various products, which meant that its foreign reserves did not increase as much as some of the other Latin American states, and that it lost bady needed capital. Argentina, despite its pro-German leanings and its hostility towards the United States, did very well as trade increased rapidly. Panama also benefited economically, mainly because of increased traffic through the canal and the demand for goods from ships passing through the canal. In Puerto Rico, the alcohol industry boomed because access to European markets ceased. Mexico and Venezuela both were aided by the high price of oil. Mexico used this commodity to force a deal on its terms with American and European oil companies for its nationalization of its oil industry in 1938. Furthermore, during the war President Manuel Ávila Camacho capitalized on the situation to impove Mexico's bargaining position with the United States.[1]

On March 21, 1942, the United States government enacted Lend-Lease, which was a program designed for the exchange of war materials and other assistance from the United States for military bases and participation in the defense of the Western Hemisphere. The United Kingdom and other European nations, including their colonies, logically received the majority of the aid, because the chaos of war was much closer to them. Latin America, to the contrary, received approximately $400 million in war materials, which was a small fraction compared to what was distributed to the European nations.[4]

Brazil benfited the most from Lend-Lease out of all of the Latin American nations during the war, mainly because of its geographical position at the northeastern corner of South America, which allowed for patrolling between South America and West Africa, as well as a ferry point for the transfer of American-made war materials to the Allies fighting in North Africa, but also because it was seen as a possible German invasion route that had to be defended. New and favorable trade treaties were signed with the United States, which offered loans and military aid, but of more importance was the drop in competition in Brazil's manufacturing industry. Brazil received three-quarters of the Lend-Lease assistance distributed in Latin America. Ecuador received some, mainly for the building of an airbase in the Galapagos, and both Colombia and the Dominican Republic used Lend-Lease to modernize their militaries in exchange for their participation in the defense of the Panama Canal and the Caribbean sea lanes.[1] In contrast to the above mentioned countries, Argentina and Chile received very little military aid, because for most of the war neither would heed to American demands that they severe all relations with the Axis powers. Peru received some aid, but by 1943 the western coast of South America had lost all strategic significance, because it was so far away from the main theaters of war, and thus Peru lost its immediate justification for Lend-Lease weaponry. The Central American nations suffered a similar fate as Peru. By 1943, the Pan-American Highway, which the United States was building for defense purposes, ceased to be a priority, and so work on the road, as well as military aid, was halted.[1]

According to Leonard, Lend-Lease changed the balance of power in Latin America and "rekindled old rivalries." The Chilean government, for example, was very concerned about its lack of military assistance, not out of fear of an attack by Axis forces, but because it was concerned that Bolivia and Peru might attempt to use their newly acquired weapons to take back territory lost to Chile several years before during the War of the Pacific. Ecuador was also concerned about Peru, because, at the end of the 1941 Ecuadorian-Peruvian War, the latter used the United States' desires for a calm and united southern flank to settle an unfavorable peace treaty with the former. Finally, Argentina was threatened by its old rival, Brazil, because of the latter's access to modern American weaponry. Leonard says that the Argentine dictator Juan Perón came to power partially by claiming that he would "redress this change in military status."[1]

At the beginning of World War II, fascism was seen as a positive alternative by some Latin American leaders and groups that were impressed by Germany's Adolf Hitler and Italy's Benito Mussolini. President Rafael Trujillo of the Dominican Republic, for example, admired Hitler for his style and his militaristic rallies. Similar views were held by Jorge Ubico and Maximiliano Hernández Martínez, the dictators of Guatemala and El Salvador, respectively. According to Leonard, in Brazil, Argentina, and Chile, the strong sense of unity and purpose created by fascism was quite attractive. All three nations had an influential fascist political party. Brazil's Integralists dressed in jackboots and green military-style shirts, and were open admirers of Mussolini.[1]

The politics of fascism were not all that was attractive: In the pre-war years, the Germans also enjoyed growing economic penetration using strict binational trade agreements to ensure that the economic relationship with various Latin American nations would be equal. Brazil, Mexico, Guatemala, Costa Rica, and the Dominican Republic all had trade agreements with Nazi Germany. Brazil's trade with Germany, for example, doubled between 1933, when Hitler came to power, and 1938, the year before the war began. With the start of the war in September 1939, Axis ships could no longer cross the Atlantic for commerce, and so trade between Latin America and Germany and Italy ceased. Losing trading partners hurt some of the Latin American states, and in most cases the United States was the only country that was able to replace the Germans and Italians.[1]

Almost all of the Latin American states had to respond to Axis espionage activity. Mexico, and to a lesser extent Brazil, cooperated with the United States in shutting down Axis cells. Chile and Argentina, on the other hand, allowed enemy agents to operate in their countries for most of the war, which was a source of considerable discord between the two nations and the United States. Many of the Latin American states also had to deal with large amounts of immigrants from Axis countries. Colombia, for example, had a population of about 4,000 German immigrants in 1941, as well as a small village of Japanese farmers in Cauca. Many of the Germans in Colombia were involved in the air transportation industry as employees of SCADTA, so the United States was concerned that they might be engaged in espionage, and even plotting to convert civilian aircraft into bombers for an attack against the Panama Canal. As result, the United States government pressured Colombia into monitoring and interning the immigrants, or in some cases deporting them to the United States. The same occurred in other Latin American countries as well.[1][1] The threat of German and Spanish espionage was much more real. Throughout much of the war, the Germans operated spy networks in all of the most prominent countries of the region, including Argentina, Chile, Paraguay, Brazil, Cuba, Mexico, and others. Operation Bolivar, as it was called, was centered on clandestine radio communications from their base in Argentina to Berlin in Germany, but it also utilized Spanish merchant vessels for the shipment of paper-form intelligence back to Europe. The latter was possible because of Spanish cooperation with German intelligence agencies during the war. Although Argentina and Chile eventually "cracked down" on the Axis agents operating in their countries in early 1944, some Bolivar activity continued up until the end of the European war in May 1945.[2][3] In addition to German espionage and sabotage in Latin America, the United States was also concerned about Nazi propaganda. For example, Germany's embassy in Guatemala City served as the distribution center for Nazi propaganda in Central America. Prior to the beginning of the war in 1939, the propaganda focused on the superiority of German manufactured goods, and claimed that Germany was the center for scientific research, because it had the "world's most advanced educational system." Between September 1939 and late 1943, the propaganda focused on German victories and the superiority of its military equipment. From Guatemala the propaganda made its way to the German embassies in other countries, often as packages aboard the Salvadoran airline TACA.[5]

Federal police escorting members of the National Socialist Movement of Chile during the Seguro Obrero Uprising. On September 5, 1938, after four hours of fighting in Santiago, Chilean authorities rounded up and executed nearly sixty rebels who had surrendered. About twenty others were killed during the fighting.

Representatives of Latin American governments and United States retailers during a meeting in Washington, D.C. on November 1, 1939, to discuss a means of increasing trade in the Western Hemisphere. 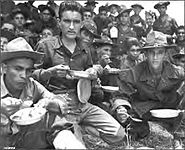 Soldiers of the American 65th Infantry Regiment in Salinas, Puerto Rico, in August 1941.

An Italian Savoia-Marchetti SM.81 tri-motor airliner at Howard Field in 1942. This aircraft, which was acquired by the United States from the Italian-Latin American Airline (LATI), was seized in Chile by local government officials and donated to the United States Army because of shortage of transports in Central America.

President Isaías Medina Angarita of Venezuela speaking to Congress during his official state visit to the United States in 1944.

Members of Mexico's 201st Air Fighter Squadron and a P-47 Thunderbolt during the Philippines Campaign in 1945.

The German submarine U-977 moored at Mar del Plata following her surrender to the Argentine Navy in August 1945.
Add a photo to this gallery

Retrieved from "https://military.wikia.org/wiki/Latin_America_during_World_War_II?oldid=5098231"
Community content is available under CC-BY-SA unless otherwise noted.