The Libyan Air Force (Arabic language: القوات الجوية الليبية‎) is the branch of the Libyan military responsible for aerial warfare. In 2010, before the Libyan Civil War, the Libyan Air Force personnel strength was estimated at 18,000, with an inventory of 374 combat capable aircraft[7] operating from 13 military airbases in Libya.[8]

The air force was first established as the Royal Libyan Air Force (Al Quwwat al Jawwiya al Malakiya al Libiyya) in 1951. It was originally equipped with a small number of transports and trainers: Douglas C-47s and Lockheed T-33s. However, F-5 Freedom Fighters were delivered from 1967. In 1970 it changed its name to the Libyan Arab Republic Air Force. After U.S. forces left Libya in 1970, Wheelus Air Base, a previous U.S. facility about 11 kilometres (6.8 mi) from Tripoli, became a LAR Air Force installation and was renamed Okba Ben Nafi Air Base. The base housed the LARAF's headquarters and a large share of its major training facilities. From 1970 a very large expansion of the air force took place, with a grand number of Soviet and some French combat aircraft being purchased.

During May 1967 the Kingdom of Libya reached an agreement with the United States to supply 10 Northrop F-5s to the Royal Libyan Air Force.[9] These were the first fighters for the young Air Force which only operated at the time six Douglas C-47 transports and three Lockheed T-33A trainers. Fifty-six personnel underwent training at bases in the U.S., pilots at Williams Air Force Base; a U.S. Survey Team on Expansion came to Libya in August 1968 to supervise the introduction of the fighters. Serviceability of the F-5s declined after the 1969 coup and it appears that most may have eventually been sold to Turkey.

LARAF Soviet-made MiG-17/19/25 fighters and Tu-22 bombers were based at Okba Ben Nafi Air Base. After the 1969 seizure of power by Colonel Gaddafi, aircraft and personnel of the Soviet Air Force took residence at Okba Ben Nafi Air Base. With Soviet assistance, the Libyan Arab Republic Air Force was organized into one medium bomber squadron with Tupolev Tu-22s, three fighter interceptor squadrons, five forward ground attack squadrons, one counter-insurgency squadron, nine helicopter squadrons, and three air defense brigades deploying SA-2, SA-3, and Crotale missiles.[10] Of the combat aircraft, the United States Department of State estimated in 1983 that 50 percent remained in storage, including most of the MiG fighters and Tu-22 bombers. In 1971, 11 civilian C-130's were delivered by the United States and converted in Italy to military versions. Four L-100-30's were purchased from the Philippines and Luxembourg in 1981. In 1976, 20 CH-47 Chinook heavy transport helicopters were acquired from Italy, 14 of which were transferred to the army during the 1990s.

The Libyan Arab Republic Air Force operated a large number of Mikoyan-Gurevich MiG-25s, some sources say more than 60 were delivered. Types were of the MiG-25PD, MiG-25RBK, MiG-25PU and MiG-25RU variants. They were operated by No. 1025 Squadron at Jufra-Hun, No. 1055 Squadron at Ghardabiya and an unidentified squadron at Sabha Air Base.[11] As of February 2007 Air Forces Monthly reported all aircraft of the type had been retired.[12] In addition, Dassault Mirage 5 aircraft bought shortly after Gaddafi took power were also retired by 2008, becoming used for Pakistan Air Force spares.[13]

During the Libyan–Egyptian War in 1977 there were some skirmishes between Libyan and Egyptian fighters. Two LARAF MiG-23MS engaged two upgraded EAF MiG-21MF and one MiG-23MS was shot down by EAF Maj. Sal Mohammad.[citation needed] The air force was also involved in combat against Tanzania in 1979 as part of the Uganda–Tanzania War to help its Ugandan allies, with a single Tu-22 flying an unsuccessful bombing mission against the town of Mwanza.[citation needed]

In the 1970s and '80s Libyan MiGs and Tupolevs were common visitors to international airspace, close to Italy and NATO bases. On 19 July 1980, a Libyan People's Air Force MiG-23 crashed on the Sila Mountains in Castelsilano, Calabria, southern Italy.[14] On 27 June 1980 an Italian plane exploded while en route from Bologna to Palermo, off the island of Ustica.[citation needed]

The LPAF lost a total of four aircraft to United States Navy F-14 Tomcats in two incidents over the Gulf of Sidra, in 1981[15] and 1989. In addition, many planes were destroyed or damaged on the ground in 1986 when American planes attacked targets at Benghazi and Tripoli airports.

The air force was extensively used in the fighting in Chad in the 1980s, in support of Libyan ground units. It was reported that many Libyan People's Air Force bombing raids were carried out at excessively high altitudes when met with anti-aircraft fire, so the attacks were not very effective. On 17 February 1986, in retaliation for the Ouadi Doum air raid by the French air force, a single LPAF Tu-22B attacked the airport at N'Djamena. That aircraft ran into technical problems on its return journey – American early warning reconnaissance planes based in Sudan monitored distress calls sent by the pilot of the Tu-22 which probably crashed before reaching its base at Aouzou (maybe hit by twin-tubes that fired at it from N'Djamena airport).[16] One Tu-22 bomber was shot down by a captured SA-6 missile during a Chadian attack on an abandoned Libyan base on 8 August 1987. Another Tu-22 was lost on 7 September 1987, when a battery of French MIM-23 Hawk SAMs shot down one of the two LPAF bombers that were attacking N'Djamena.

The Chadians seized the Ouadi Doum base in 1987 and destroyed or captured two SF.260s, three Mil Mi-25s, two Tu-22B bombers, eleven L-39 jets, two complete 9K33 Osa (SA-8) SAM batteries,[17] and a plethora of additional equipment, weapons, supplies and ammunition – a good deal of which was flown out to France and the United States within the next five days. Four USAF C-5 Galaxy transport aircraft were sent to N'Djamena to collect the captured Jamahiriya equipment. On 5 September 1987 Chadian technicals crossed into Libya and attacked the Maaten al-Sarra Air Base which is 96.5 kilometres (60.0 mi) within Libyan territory. The battle of Maaten al-Sarra was a major victory for Chad and several LPAF aircraft were destroyed on the ground with only minor Chadian casualties.[18]

On 8 October 1987, an LPAF Su-22M-22K was shot down by a FIM-92A Stinger missile in northern Chad. The pilot, Capt. Diya al-Din, ejected and was captured. The LPAF immediately organized a recovery operation; subsequently a Jamahiriya MiG-23 Flogger was also shot down by another Stinger. In December 1988 a Libyan People's Air Force SF.260 was shot down over northern Chad by Chadian troops.

With the dissolution of the Soviet Union and the elimination of military aid by the new Russian Federation, Soviet/Russian support was drastically curtailed. The last major delivery of Soviet aircraft to the Libyan Arab Jamahiriya was six Su-24 Fencers in March/April 1989.

The Libyan armed forces' air doctrine of the 1990s and 2000s appeared to be of an ad hoc nature, and contracted personnel from Yugoslavia, South Africa, Russia, North Korea and Pakistan provided piloting, maintenance and technical services.[citation needed]

The 1990s drop in oil prices and a UN embargo made purchase of modern equipment almost impossible. UN sanctions were lifted in early 1999 and the Libyan People's Air Force started prospective negotiations with Russia about upgrades for its MiG-21s and MiG-25s while also expressing an interest in MiG-29s, MiG-31s and long-range SAMs. However, many of the transport and combat aircraft were in storage.[citation needed]

Before 2011, the LPAF MiG-21s did not fly at all due to reported serviceability issues and of 170 MiG-23s delivered, only 30-50 were believed to be flyable aircraft. Those ratios may have been similar for several other platforms.[citation needed]

During the Libyan Civil War, Libyan People's Air Force warplanes and attack helicopters launched repeated airstrikes on protesters, reportedly targeting a funeral procession and a group of protesters trying to reach an army base. The human rights researcher Ahmed Elgazir had reported, that the Libyan News Centre (LNC) received a satellite phone call from a (not named) woman who was "witnessing the massacre in progress". This Information could not be verified, since phone lines in the country had been blocked.[19][20] On 21 February 2011, two senior LPAF pilots defected – they flew their Mirage F1 fighter jets to Malta and requested political asylum after defying orders to bomb protesters.[21]

On 23 February 2011, pilot Abdessalam Attiyah al-Abdali and co-pilot Ali Omar al-Kadhafi – crew of a Sukhoi-22 – ejected with parachutes near Ajdabiya, 161 kilometres (100 mi) west of Benghazi, after refusing orders to bomb the city of Benghazi.[22] Anti-Gaddafi forces and Syrian opposition groups claim that Syrian pilots were flying attacks for the Libyan Arab Jamahiriya.[23] Rebels claimed to have shot down Jamahiriya jets over Brega and Ra's Lanuf.[24]

At Brega a Mirage F-1 was shot down and at Ra's Lanuf a Sukhoi Su-24 bomber and a helicopter (probably a Mi-24) were also forced down. Exactly how many and what types of aircraft have been shot down were not confirmed by Jamahiriya government or independent sources. Using air power, the Libyan military checked the opposition advance westwards, towards Bin Jawad in early March.[25] On 13 March 2011, Ali Atiyya, a colonel of the Libyan People's Air Force at the Mitiga military airport, near Tripoli, announced that he had defected and joined the revolution.[26] Rebels claimed to have shot down what appeared to be a MiG-21 outside of Bohadi. On 17 March, a Jamahiriya Su-22M-3K was shot down over Benina AB, the pilot ejected safely and was captured.[27] On 17 March, a "Free Libya Air Force" MiG-21UM crashed after take off from Benina airport due to technical problems. It was flown from Ghardabiya Air Base near Sirte to Benina by a defecting pilot the day before.[28]

On 19 March 2011, a rebel MiG-23BN was shot down over Benghazi by rebel air defence forces in a case of mistaken identity.[29] The pilot ejected, but at a very low altitude, and was reported to have been killed as a result.[30][31] BBC News reported on 20 March that the rebel aircraft was shot down by its own air defenses[32]

On 23 March 2011, British Air Vice-Marshal Greg Bagwell was quoted by the BBC saying that the Libyan People's Air Force "no longer exists as a fighting force" and that Libyan air defenses had been damaged to the extent that NATO forces could now operate over Libyan airspace "with impunity."[34] On 24 March 2011 several media sources reported that a French Dassault Rafale destroyed a G-2 Galeb near Misrata. Initial reports of the French action said the LPAF plane, a G-2/Galeb with a single engine, was in the air when it was hit. French military spokesman Col. Thierry Burkhard later said the plane had just landed when the attack took place.

On 26 March 2011, the French Air Force reported that five Soko G-2 Galeb aircraft were destroyed on the ground at Misrata airport together with two Mi-35 helicopters,[35] but satellite images showed that the five fixed wing aircraft were MiG-23s.[36]

On 7 May 2011, after weeks of complete inactivity, the Libyan People's Air Force conducted a successful air raid over the rebel-held fuel depots at Misrata setting them on fire. The rebels reported that the raid was conducted with crop dusting aircraft, but probably SF.260 light attack aircraft were used taking off from Misrata airport. NATO failed to intercept the bombing mission.[38]

Following the defeat of forces loyal to Muammar Gaddafi and the rebel victory in October 2011, the no fly zone was lifted and two grounded Jamahiriya air force Mirages that had been based in Malta after their pilots refused orders to bomb the opposition during the civil war, were to be returned to Libya in February 2012.[39] The jets were finally returned to Libya on 21 February 2012, exactly a year to the day after they defected.[40] 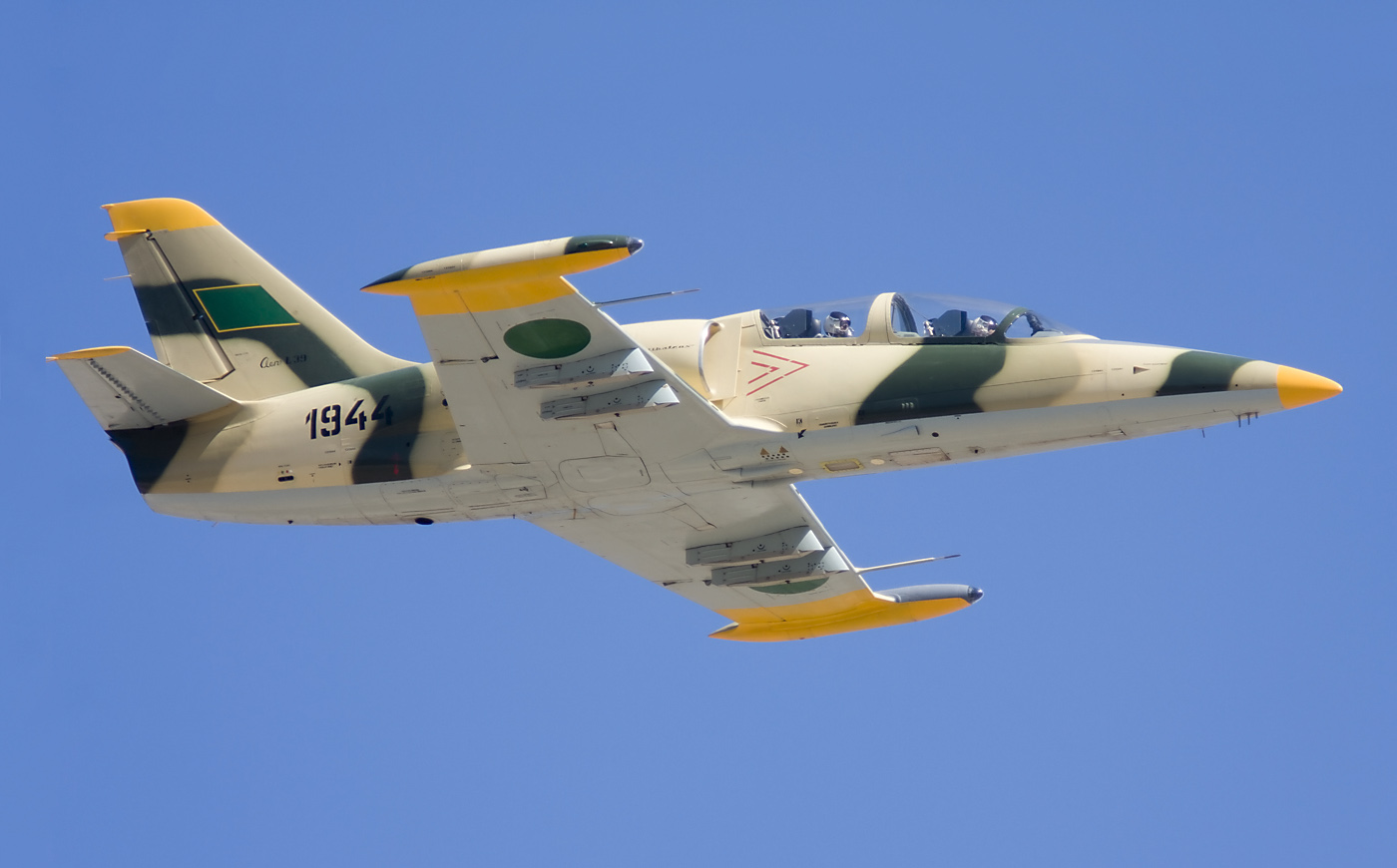 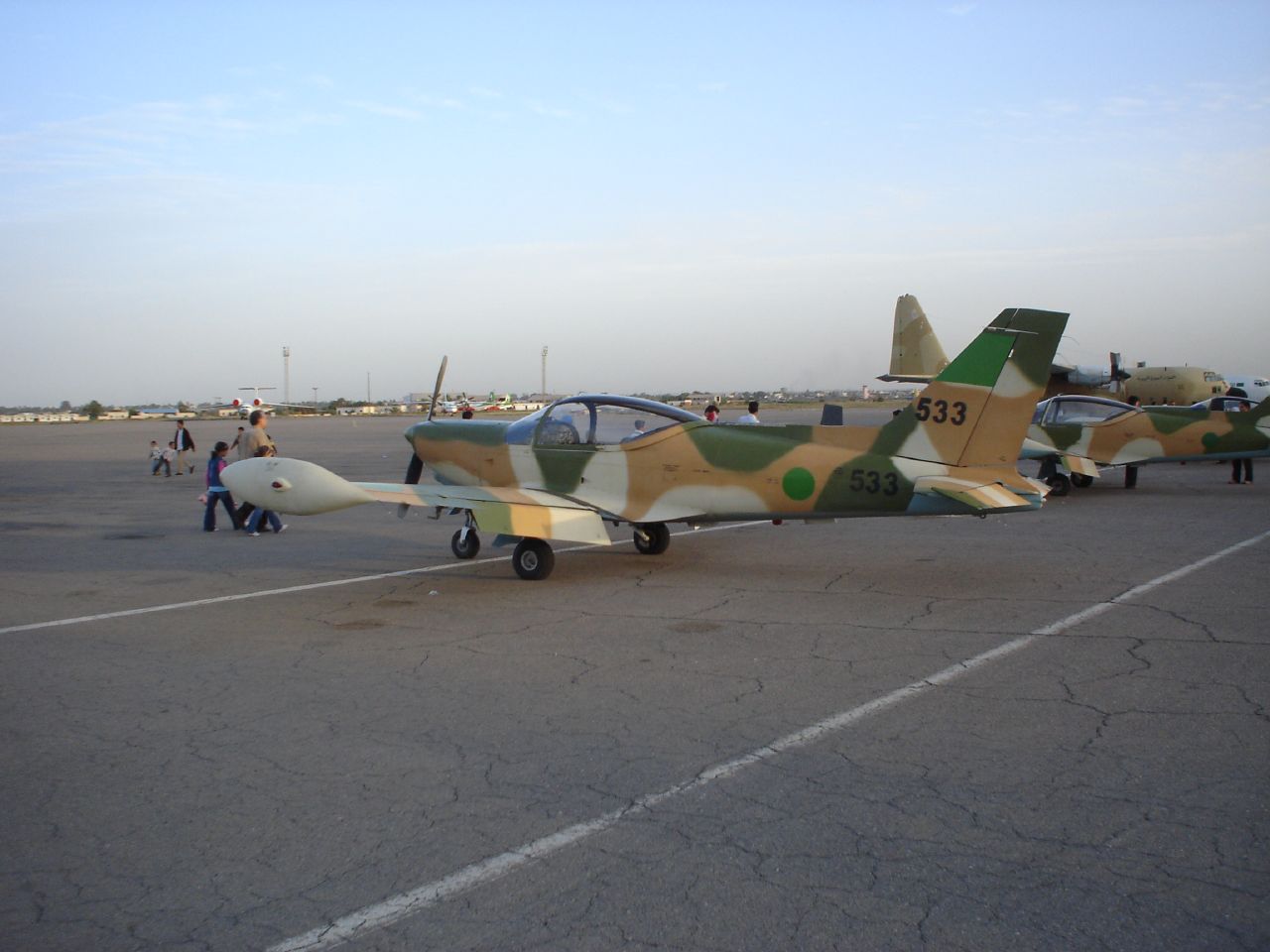 Aermacchi SF.260 training and light attack aircraft of the LPAF 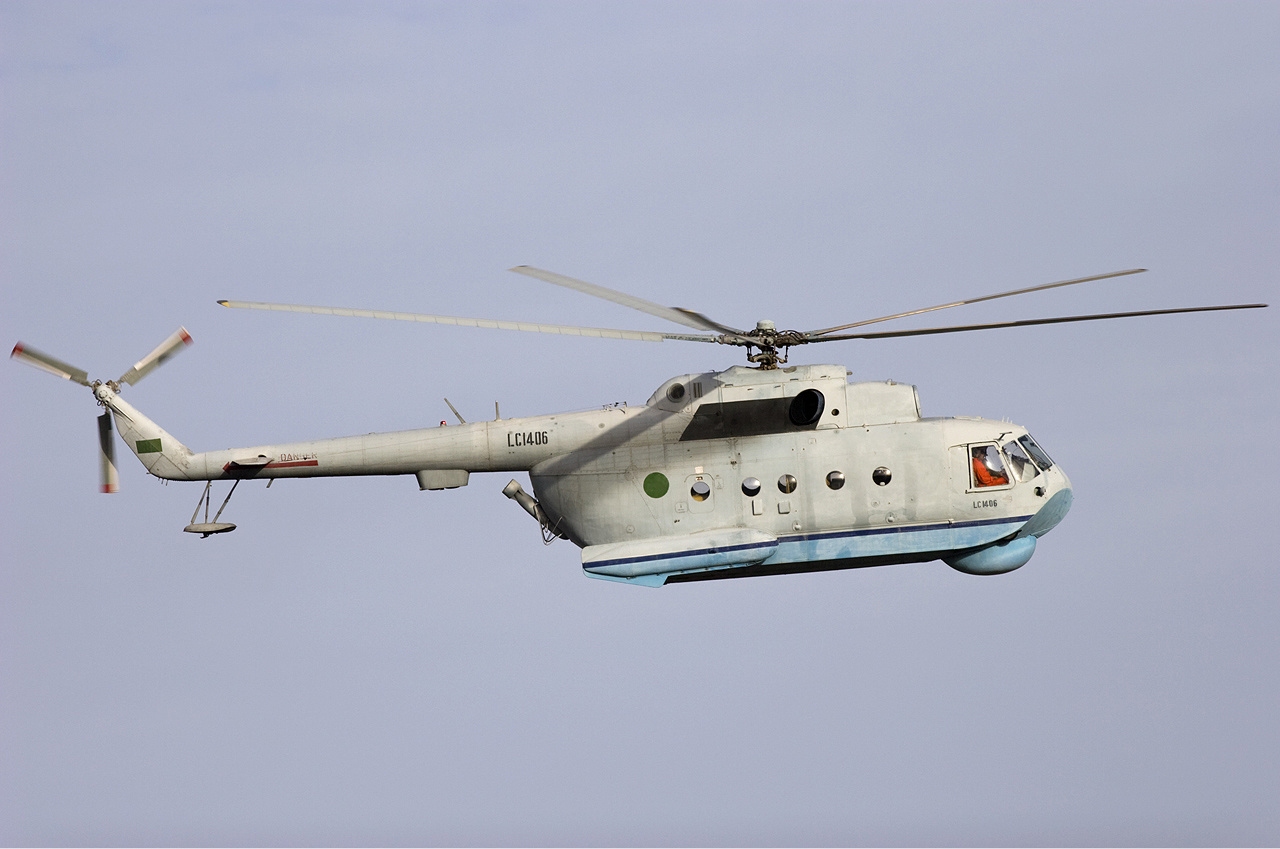 Mil Mi-14 of the LPAF with anti-submarine capabilities

Retrieved from "https://military.wikia.org/wiki/Libyan_Air_Force?oldid=4650217"
Community content is available under CC-BY-SA unless otherwise noted.