The Life Guards (LG) is the senior regiment of the British Army and part of the Household Cavalry, along with the Blues and Royals.

The Life Guards grew from the four troops of Horse Guards (exclusively formed of gentlemen-troopers until the transformation of the last two remaining troops into Regiments of Life Guards in 1788)[1][2] raised by Charles II around the time of his restoration, plus two troops of Horse Grenadier Guards (rank and file composed of commoners),[3] which were raised some years later.[4]

These units first saw action during the Third Anglo-Dutch War in 1672 and then at the Battle of Sedgemoor during the Monmouth Rebellion in 1685.[5]

The 3rd and 4th troops were disbanded in 1746.[4] In 1788, the remaining 1st and 2nd troops, along with the two troops of Horse Grenadier Guards, were reorganised into two regiments, the 1st and 2nd Regiments of Life Guards (from 1877, simply 1st Life Guards and 2nd Life Guards).[4] From then on (1788), rank and file were mostly formed of commoners (pejorative nickname: "cheesemongers"),[6] the bulk of the gentlemen-troopers were pensioned off.[7]

In 1815 they were part of The Household Brigade at the Battle of Waterloo under Major-General Lord Edward Somerset.[5]

In 1821, the Life Guards under the command of Captain Oakes fired upon mourners trying to redirect the funeral procession of Queen Caroline through the city of London. Two civilians were killed. Though charges of manslaughter and murder were brought, no guardsmen were prosecuted.[8]

In late 1918, after much service in the First World War, the two regiments gave up their horses and were re-roled as machine gun battalions, becoming the 1st and 2nd Battalions, Guards Machine Gun Regiment. They reverted to their previous names and roles after the end of the war.[5] In 1922, the two regiments were merged into one regiment, The Life Guards (1st and 2nd).[4] In 1928, it was re-designated The Life Guards.[5]

During the Second World War, the Life Guards took part in the Normandy landings and the advance through France to liberate Brussels.[5]

In 1992, as part of the Options for Change defence review, The Life Guards were joined together with the Blues and Royals in a 'Union', not an amalgamation, forming the Household Cavalry Regiment (armoured reconnaissance) and the Household Cavalry Mounted Regiment (ceremonial duties). However, they maintain their regimental identity, with distinct uniforms and traditions, and their own colonel.[5] In common with the Blues and Royals, they have a peculiar non-commissioned rank structure: In brief, they lack sergeants, replacing them with multiple grades of corporal.[9]

Names used by the regiment were as follows:[4] 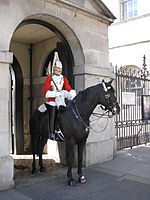 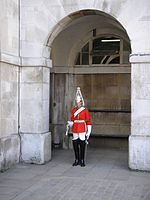 On ceremonial occasions the Life Guards wear a scarlet tunic, a metal cuirass and a matching helmet with a white plume worn bound on the top into an 'onion' shape; the exceptions to this are the regiment's trumpeters, who wear a red plume, and farriers, who wear blue tunics and have a black plume.[10] In addition, the Life Guards wear their chin strap below their lower lip, as opposed to the Blues and Royals who wear it under their chin. On service dress the Life Guards Officers and Warrant Officer Class Ones wear a red lanyard on the right shoulder, as well as a Sam Browne belt.[11] The Life Guards, as part of the Household Division, does not use the Order of the Bath Star for its officer rank "pips", but rather the Order of the Garter Star.[12]

The Colonels-in-Chief of the regiment were:[14]

The Regimental Colonels were:[14]

Life Guards performing ceremonial drills on both horseback and with vehicles in London's Hyde Park.

Life Guard (close up of helmet and plume)

Retrieved from "https://military.wikia.org/wiki/Life_Guards_(United_Kingdom)?oldid=5272897"
Community content is available under CC-BY-SA unless otherwise noted.