This is a list of B-29 Superfortress units consisting of nations, their air forces, and the unit assignments that used the B-29 during World War II, Korean War, and post war periods, including variants and other historical information

Army Air Forces B-29 groups and squadrons assigned to operations as part of the Pacific War against the Japanese Empire, 1944–1945. Includes units assigned to the XX Bomber Command in the China-Burma-India Theater (April 1944-February 1945), and to XXI Bomber Command in the Pacific Theater of Operations (PTO) (March–August 1945). Also includes groups and squadrons deployed to Okinawa assigned to Eighth Air Force, in July/August 1945 but did not engage in combat operations. 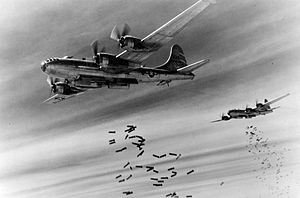 Army Air Forces groups which were assigned to Second Air Force for conversion B-29 training during the summer of 1945. These groups were returned to the United States from the European Theater of Operations (ETO) after the German Capitulation in May 1945, and were programmed to redeploy to the Pacific Theater of Operations (PTO) after their training was completed. However, the Japanese Capitulation and the end of combat in the PTO led to their inactivation after August 1945.

.* Note: The 472d Bombardment Group was a Second Air Force Operational Training Unit for initial B-29 crew training established in 1943; the 5th Bombardment Group was redesignated and reequipped as a B-29 unit by Far East Air Forces and assigned to Thirteenth Air Force in the Philippines in 1946 from aircraft and equipment of former XXI Bomber Command units which had inactivated. The 5th BG was a prewar bomb group assigned to Hawaii at the time of the Pearl Harbor Attack; its B-17s largely destroyed on the ground at Hickam Field. The unit was reformed into a B-24 Liberator heavy bomb group after the attack and was assigned to Thirteenth AF during the war; the 32d Composite Wing flew RB-29s for Far East Air Forces in the late 1940s, primarily as photo-mapping aircraft over China, Formosa, Indochina and Korea.

Army Air Forces B-29 bomb groups assigned to Strategic Air Command (SAC) after the command's establishment in March 1946. Includes groups were returned to the United States from the European Theater and were programmed to redeploy to the Pacific Theater of Operations (PTO) after their B-29 conversion training was completed. These units were retained on active service after the Japanese Capitulation in August 1945 and were assigned to Continental Air Forces (CAF). In March 1946 were transferred to SAC upon redesignation of CAF to SAC.

Many of these units and squadrons were undermanned and under-equipped due to the rapid demobilization of the armed forces in this period. In addition, frequent inactivations and activations were made, with older, prewar units being reactivated in place of younger, wartime units. Up until the end of the Korean War, SAC used tail markings that consisted of a combination of geometric shapes and letters. The shape would indicate the Numbered Air Force, with a triangle representing the Eighth Air Force; a circle for Fifteenth Air Force and a square for Second Air Force. This system was phased out in 1953.

B-29-95-BW Superfortress, 45-21768, "Kee Bird" of the 46th/72d Reconnaissance Squadron. This aircraft became marooned after making an emergency landing in northwest Greenland during a Cold War strategic reconnaissance mission on 21 February 1947 and was attempted to be recovered in 1995. The recovery effort failed, and the aircraft was accidentally destroyed in the process. 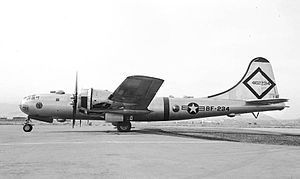 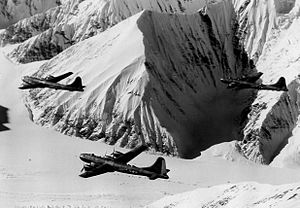 The B-29 was the mainstay of Strategic Air Command after World War II until the Korean War. B-29 "Very Heavy" bomber units were redesignated "Medium" with the introduction of the B-36 Peacemaker into the inventory in 1948, with some units transitioning to the B-36/RB-36 beginning in 1949. The B-50 Superfortress, an advanced version of the B-29 was also introduced in 1949.

SAC deployed non nuclear-capable B-29 groups to Far East Air Forces in 1950 to conduct strategic bombardment missions over the skies of North Korea, however the aircraft was made obsolete by the development of Soviet jet-powered interceptors such as the MiG-15. The B-29 soldiered on for a more few years in the strategic bombardment role, but by 1955 was replaced by the B-47 Stratojet medium bomber.

300px
A KB-29M delivers fuel to an F-86A Sabre over Rogers Dry Lake. Note that the fighter is flying nose-high in order to match its speed to the slower tanker; even so, it had to lower its landing gear for additional drag. 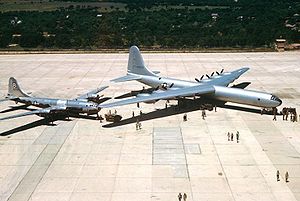 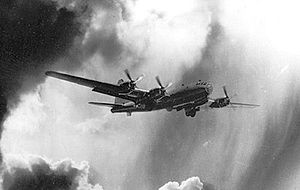 After the Korean War and the phaseout of the B-29/KB-29 from SAC, KB-29s were acquired by Tactical Air Command to serve as dedicated aerial refueling tankers for Tactical Fighter aircraft to give TAC a worldwide deployment capability separate from SAC. However, it was found that the KB-29 was totally unsuitable for the refuelling of jet fighters because they were too slow. The KB-29s were replaced beginning in 1956 with faster KB-50s.

During the Cold War, the Military Air Transport Service the controlling command for Air Commando units which performed special operations during the 1950s, including during the Korean War. As part of the equipment used by the Air Resupply And Communications Service (ARCS) were B-29s modified for special operations missions.

Weather reconnaissance duties required special variant of the B-29. Armament and related equipment was removed and in place of upper forward turret astrodome was installed. Additional radio and specialized meteorological equipment was installed and such refitted aircraft was redesignated WB-29.[6] While the B-29's "public" mission was that of weather reconnaissance, the "covert" mission, that of atmospheric sampling for radiation debris, was perhaps the more critical task.

WB-29s soldiered on through the mid-1950s, providing critical data on tropical storms, nuclear tests, and many other routine but important reconnaissance tasks. But the airplanes were weary, and by 1956 were replaced by a modification of seventy-eight B-50Ds to WB-50 configuration.

B-29-96-BW serial number 45-21800 was used as the "mother" aircraft for launches of the Bell X-1 rocket-powered research aircraft at Edwards AFB. On October 14, 1947, Capt Charles E. "Chuck" Yeager was dropped in his X-1 from the B-29 and was credited as the first human to pilot an aircraft faster than the speed of sound.

Several B-29s were modified for various experimental purposes under the designation EB-29. Perhaps the best known of these was the EB-29 used as the carrier aircraft for the McDonnell XF-85 Goblin parasite fighter in 1948. The rear bomb bay was modified to carry a special cradle from which the XF-85 could be launched and retrieved in flight.

Beginning in 1954, the 4754th Radar Evaluation Squadron, Air Defense Command operated B-29s from various bases in the United States to provide ECM training and evaluation services to its radar site personnel. The B-29s contained an assortment of RADAR jamming devices to provide the required training of personnel.

The United States Navy received four B-29s on April 14, 1947 and redesignated as P2B. Two of these aircraft were in standard configuration (P2B-1S), two another were equipped with test radar and additional fuel tank in bomb bay (P2B-2S).[7]

Naval B-29s were used as test beds and as mother ships in various programs. One P2B-1S was extensively modified to carry the Douglas D-558-II Skyrocket supersonic rocket-powered research aircraft. The first Skyrocket launch took place on September 8, 1950. The Skyrocket exceeded Mach 2 for the first time on November 20, 1953 (piloted by Scott Crossfield). The last Skyrocket flight took place in December 1956.

P2B-1S BuNo 84029 was later transferred to NACA for continuation of high-speed flight tests and was redesignated as NACA-137.[7] It was eventually sold to a civilian owner, a museum in Oakland, California. This was the only example of a flyable B-29 ever being sold to a civilian operator. This B-29 was flown on rare occasions under the civil registration N91329. After many years of inactivity, it was sold to the Kermit Weeks Aviation Museum of Miami, Florida. It was transported there disassembled in 1987. It was registered with the Weeks Museum as N29KW.

The Royal Air Force urgently needed interim aircraft for their bomber squadrons briefly as a "stop gap" in the early 1950s, prior to the build up of the RAF Canberra jet bomber force. This was considered an excellent arrangement from the RAF’s point of view as it provided experience of operating relatively modern equipment without diverting any of the development effort and investment from the Canberra and the V bombers.

A formal agreement with the USA was signed on January 27, 1950 and the USAF loaned the RAF seventy B-29 bombers which received the serials WF434-WF448, WF490-WF-514 and WF545-WF574. Later another 18 were delivered under serials WW342-WW356 and WZ966-WZ968.[8] The aircraft received the service name Boeing Washington B.1 (B.1 from "Bomber Mark 1") with RAF Bomber Command from 1950 as a longer-range nuclear-capable bomber, pending the introduction of the English Electric Canberra in quantity.

Most of the airframes were taken out of USAF storage and many were virtually new, having been delivered at the end of the Pacific War, although a small number came from operational units. The first 4 aircraft were delivered to the Washington Conversion Unit at RAF Marham on March 22, 1950. All B-29s for the RAF were ferried by the crews of the 307th Bombardment Wing USAF. The first unit converted to Washingtons was No. 115 Squadron RAF which flown from USA in June 1950.[8] Two RAF Washingtons took part in the Laurence Minot SAC bombing competition in 1951 alongside USAF B-29s.

Squadrons based at RAF Coningsby were converted to English Electric Canberra bombers in 1953. Squadrons from RAF Marham were converted a year later.[8] Most Washingtons were returned to the United States, being flown by RAF crews to Dover AFB; then subsequently to the aircraft storage facility at Davis-Monthan AFB. A small number of Washingtons remained in the United Kingdom, being used by 192 Sq. for Electronic Intelligence operations until 1958; later being used as ground target airframes for RAF combat aircraft.

</dl>
Retrieved from "https://military.wikia.org/wiki/List_of_B-29_Superfortress_operators?oldid=2574876"
Community content is available under CC-BY-SA unless otherwise noted.