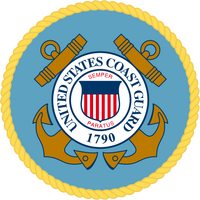 The following is a list of people who served in the United States Coast Guard and have gained fame through previous or subsequent endeavors, infamy, or successes:

Retrieved from "https://military.wikia.org/wiki/List_of_United_States_Coast_Guard_people?oldid=4418369"
Community content is available under CC-BY-SA unless otherwise noted.