This is a list of current United States Marine Corps battalions, sorted by the mission they perform.

Infantry battalions are the heart and soul of the ground combat element. The mission of locating, closing with, and destroying the enemy with fire and maneuver and repelling the enemy's assault with fire and close combat lies with the "grunts". Marine infantry battalions often have limited organic equipment outside of small arms (maneuvering by foot as light infantry, and must be supplemented with additional trucks to become motorized infantry or Amphibious Assault Vehicles to become mechanized infantry.

A Marine infantry battalion is usually organized into three rifle companies, a weapons company, and a headquarters company. The rifle company has three or four rifle platoons and a weapons platoon with medium machineguns and mortars. The weapons company includes a heavy machinegun platoon, a mortar platoon, and an assault platoon. Sometimes, the commander will mix these into Combined Anti-Armor Teams. The headquarters company includes all command, administration, intelligence, operations, logistics, and communication Marines and equipment, as well as the battalion's Surveillance and Target Acquisition teams (which include scout snipers).

Field artillery units are charged with fire support of the Marine Air-Ground Task Force. Currently, artillery regiments contain 3 or 4 cannon battalions (using the newer M777 howitzer or transitioning from the M198 howitzer) and one rocket battalion (using the High Mobility Artillery Rocket System). Marine artillery battalions are self-sufficient with forward observers, Fire Direction Control, and gun batteries. Counter-battery radar is usually a regimental asset, but can be detached to augment battalions or batteries.

The mission of a tank battalion is to conduct operations ashore utilizing maneuver, armor protected firepower and shock action in order to close with and destroy the enemy, as well as provide expertise in anti-tank operations. Currently, tank battalions utilize the M1A1 Abrams main battle tank and the M88A2 Recovery Vehicle.

The mission of an armor unit is to conduct and support amphibious operations and other operations as required by landing and transporting to inland objectives the surface assault elements and their equipment, and by conducting light armored reconnaissance and limited offensive and defensive operations. When task-organized with infantry, tanks, and other forces, the battalion conducts combined arms operations as a separate maneuver element in support of the Marine Division. Currently, Assault Amphibian battalions utilize the Amphibious Assault Vehicle (AAVP-7A1), though plans are to replace it with the Expeditionary Fighting Vehicle. Light Armored Reconnaissance battalions use the LAV 25 series of vehicles. The Combat Assault Battalion is unique in that it combines both vehicles into a single battalion.

The mission of combat engineers is to provide mobility, counter mobility, survivability, and limited general engineering support. Mobility includes the assessment and fortification of roadways and bridges, the clearing of enemy obstacles and landmines, and assault breachingdisambiguation needed. Counter mobility includes creating obstacles and barriers for the enemy, which could include the destruction of structures and/or bridges. Survivability includes the fortification of positions and the construction of new outposts. Other jobs can include Explosive Ordnance Disposal (EOD), construction, and utilities (such as generators and refrigeration). Currently, combat engineers use a variety of tools for their trade. Some vehicles include the M9 Armored Combat Earthmover, D7 Bulldozer, M60A1 Armored Vehicle Launched Bridge, and various cranes and forklifts.

The mission of the reconnaissance battalions is simply: reconnaissance. They specialize in amphibious recon, including hydrography; as well as airborne recon, infiltration via surface, subsurface and airborne operations, and conducting limited scale raids and ambushes.

Headquarters battalions serve as the command and control nexus for a Marine division or logistics group. They contain the administration, intelligence, operations, planning, logistics, communication, and public affairs control of the division.

Maintenance battalions provide upper level support for the repair of equipment. The only higher echelon of repair exists at Marine Corps Logistics Depots.

Supply battalions provide supply support past that of organic unit supply. They provide all assets that a Marine unit might need, excepting fuels, water, and aviation repair parts provided from the Navy. Rations, repair parts, ammunition, personal equipment, and even entire end items are all provided by or through the supply battalions.

Medical battalions provide medical care beyond the immediate care of unit corpsmen. Often, these units act as field hospitals when on deployment. In garrison, they supplement naval hospitals at various Marine installations.

Dental battalions are responsible for the oral health of Marines and Sailors within the MAGTF. On deployment, they can also be used to support field hospitals y[citation needed] when not performing dental roles. In garrison, they run dental health clinics at various Marine installations.

Communications battalions provide communication support for the MAGTF as part of the MEF headquarters groups. They also perform networking and data services when deployed.

Low Altitude Air Defense Battalions (LAAD) Battalions are tasked with providing ground based air defense in support of the MAGTF. They are also able to be tasked as provisional infantry battalions. They are the only battalion within the Marine Air Wing. 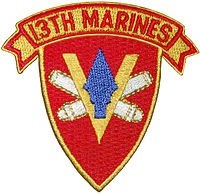 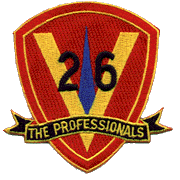 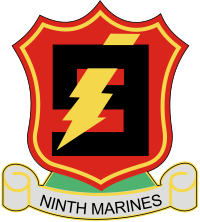 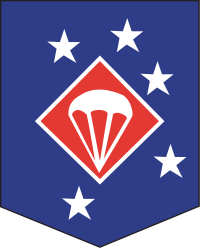 Note: Personnel from this unit were transferred to the 5th Marine Division.

Note: In February 1944 the 1st Raider Regiment was disbanded and reorganized as the 4th Marine Regiment.

Retrieved from "https://military.wikia.org/wiki/List_of_United_States_Marine_Corps_battalions?oldid=4530708"
Community content is available under CC-BY-SA unless otherwise noted.