There have been 69 four-star generals in the history of the United States Marine Corps. Of these, 51 achieved that rank while on active duty, 17 were promoted upon retirement in recognition of combat citations ("tombstone promotions", 1942-1959), and one was promoted posthumously. Generals entered the Marine Corps via several paths: 29 via Officer Candidates School (OCS), 22 via Naval Reserve Officer Training Corps (NROTC) at a civilian university, 10 via the United States Naval Academy (USNA), 3 via Reserve Officers' Training Corps (ROTC) at a civilian university, and 5 via ROTC at a senior military college.

Entries in the following list of four-star generals are indexed by the numerical order in which each officer was promoted to that rank while on active duty, or by an asterisk (*) if the officer did not serve in that rank while on active duty. Each entry lists the general's name, date of rank,[1] active-duty positions held while serving at four-star rank,[2] number of years of active-duty service at four-star rank (Yrs),[3] year commissioned and source of commission,[4] number of years in commission when promoted to four-star rank (YC),[5] and other biographical notes.[6]

The Act of Congress of March 4, 1925, allowed officers in the Navy, Marine Corps, and Coast Guard to be promoted one grade upon retirement if they had been specially commended for performance of duty in actual combat. Combat citation promotions were colloquially known as "tombstone promotions" because they conferred all the perks and prestige of the higher rank including the loftier title on their tombstones but no additional retirement pay. The Act of Congress of February 23, 1942, enabled tombstone promotions to three- and four-star grades. Tombstone promotions were subsequently restricted to citations issued before January 1, 1947, and finally eliminated altogether effective November 1, 1959. The practice was terminated in an effort to encourage senior officer retirements prior to the effective date of the change to relieve an overstrength in the senior ranks.

Any general who actually served in a grade while on active duty receives precedence on the retirement list over any tombstone general holding the same retired grade. Tombstone generals rank among each other according to the dates of their highest active duty grade.

The following list of tombstone generals is sortable by last name, date of rank as lieutenant general, date retired, and year commissioned.

The standard tour length for the commandant (CMC) is four years; two years for the assistant commandant (ACMC); for a combatant commander, three years; and a total of four years served in consecutive two-year terms for the chairman and vice chairman of the Joint Chiefs of Staff (CJCS/VCJCS). 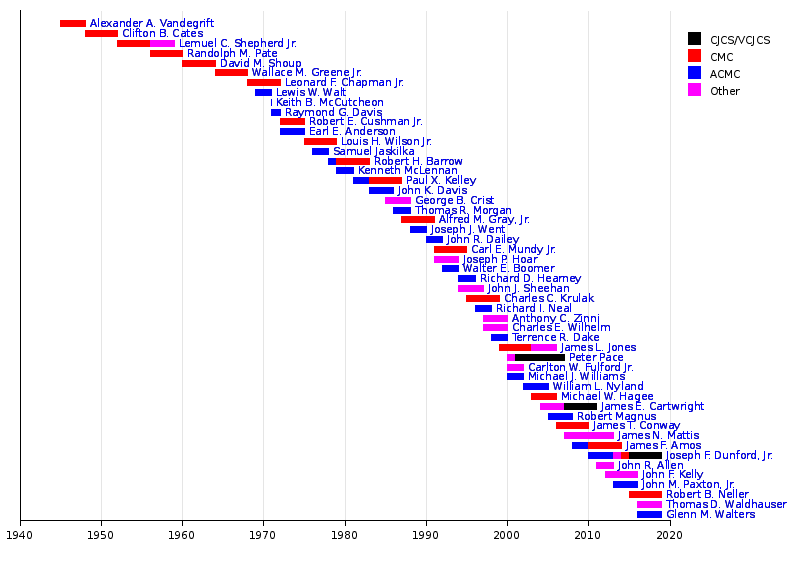 Retrieved from "https://military.wikia.org/wiki/List_of_United_States_Marine_Corps_four-star_generals?oldid=4500959"
Community content is available under CC-BY-SA unless otherwise noted.