The Manned Orbiting Laboratory (MOL), originally referred to as the Manned Orbital Laboratory, was part of the United States Air Force's manned spaceflight program, a successor to the cancelled Boeing X-20 Dyna-Soar military reconnaissance space plane project. The project was developed from several early Air Force and NASA concepts of manned space stations to be used for reconnaissance purposes. MOL evolved into a single-use laboratory, with which crews would be launched on 40-day missions and return to Earth using a Gemini B spacecraft, derived from NASA's Gemini program.

The MOL program was announced to the public on December 10, 1963, as a manned platform to prove the utility of man in space for military missions. Astronauts selected for the program were later told of the reconnaissance mission for the program.[1] The contractor for the MOL was the Douglas Aircraft Company. The Gemini B was externally similar to NASA's Gemini spacecraft, although it underwent several modifications, including the addition of a circular hatch through the heat shield, which allowed passage between the spacecraft and the laboratory.[2]

MOL was cancelled in 1969, during the height of the Apollo program, when it was shown that unmanned reconnaissance satellites could achieve the same objectives much more cost-effectively. U.S. space station development was instead pursued with the civilian NASA Skylab (Apollo Applications Program) which flew in the mid-1970s.

In the 1970s, the Soviet Union launched three Almaz military space stations, similar in intent to the MOL, but cancelled the program in 1977 for the same reasons.

There was one test flight of an MOL mockup that was built from a Titan II propellant tank. The Gemini 2 spacecraft was re-flown on a 33-minute sub-orbital test flight. After the Gemini was separated for its sub-orbital reentry, the MOL mockup continued on into orbit and released three satellites. A hatch was installed in the Gemini 2 heat shield to provide access to the MOL and was tested in the sub-orbital reentry. The test flight was launched by the USAF on November 3, 1966 at 13:50:42 UTC on launch vehicle Titan IIIC-9 from LC-40 at Cape Canaveral Air Force Station. The Gemini 2-MOL space capsule was recovered near Ascension Island in the South Atlantic by the USS La Salle.

The MOL was planned to use a helium-oxygen atmosphere. It used a Gemini B spacecraft as a reentry vehicle. The crew were to be launched with the Gemini B and MOL, and returned to Earth in the Gemini B. They would conduct up to 40 days of military reconnaissance using large optics, cameras, and side-looking radar.

The USAF Astronaut Maneuvering Unit (AMU) was developed for the MOL project. NASA chief astronaut Deke Slayton later speculated in his autobiography that the AMU may have been developed for MOL because the Air Force "thought they might have the chance to inspect somebody else's satellites."[3]

In response to the announcement of the MOL, the USSR commissioned the development of its own military space station, Almaz. Three Almaz space stations flew as Salyut space stations, and the program also developed a military add-on used on Salyut 6 and Salyut 7.[4][5][6]

In 2005, two MH-7 training space suits from the MOL program were discovered in a locked room in the Launch Complex 5/6 museum on Cape Canaveral.[7]

Operational MOLs were to be launched on Titan IIIM rockets from SLC-6 at Vandenberg AFB, California and LC-40 at Cape Canaveral Air Force Station, Florida.[citation needed]

Starting in 1965 a large optical system was added to the spacecraft for military reconnaissance. This camera system was codenamed Dorian and given the designation KH-10. The project was canceled on June 10, 1969 before any operational flights occurred.

The KH-10 intended for the MOL program was succeeded by the unmanned KH-11 Kennan, which launched in 1976 as the Soviet Union was winding down its manned space reconnaissance program. The KH-11 achieved the goal of 3-inch (76 mm) imaging resolution and introduced video transmission of images back to Earth.[1]

The program was canceled on 10 June 1969, with the first projected flight three years away. Between 1965 and 1969, MOL's projected cost rose from $1.5 billion to $3 billion while the Vietnam War took larger portions of the defense budget. While Defense Secretary Melvin R. Laird and the Joint Chiefs of Staff strongly supported the station, Central Intelligence Agency head Richard Helms did not support the project because he feared that the death of a MOL astronaut might ground launches and thus damage the nation's satellite reconnaissance program. President Richard Nixon and National Security Advisor Henry Kissinger agreed to the Bureau of the Budget's proposal to cancel MOL,[8] as it was determined the capabilities of unmanned spy satellites met or exceeded the capabilities of manned MOL missions. There were 14 MOL astronauts in the program when it was canceled, and NASA offered those under 35 years of age the opportunity to transfer to the NASA astronaut program. Seven of the 14 MOL astronauts were younger than 35 and took the offer: Richard H. Truly who later became the NASA Administrator, Karol J. Bobko, Robert Crippen, C. Gordon Fullerton, Henry W. Hartsfield, Robert F. Overmyer, and Donald Peterson. All eventually flew on the Space Shuttle.

The Gemini 2 capsule used in the only flight of the MOL program is on display at the Air Force Space & Missile Museum at Cape Canaveral Air Force Station.[9] A test article at the National Museum of the United States Air Force, at Wright-Patterson AFB, Ohio is the Gemini B spacecraft (sometimes confused with Blue Gemini). It is recognized by its distinctive "US Air Force" written on the side, and the circular hatch cut through the heat shield.[10] 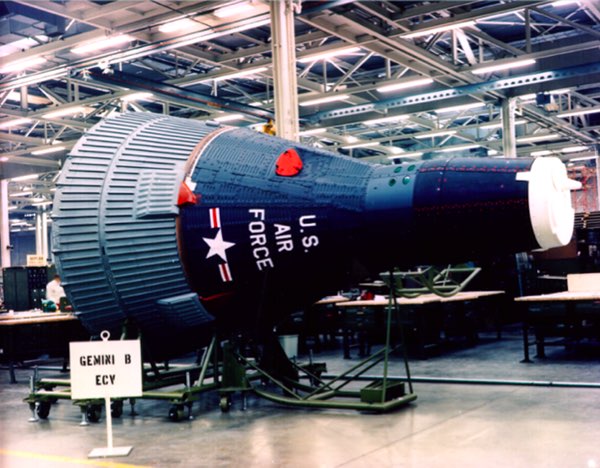 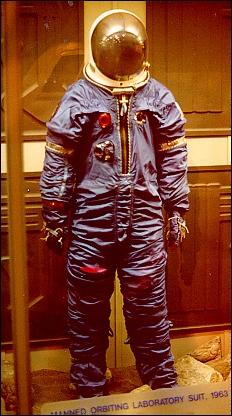 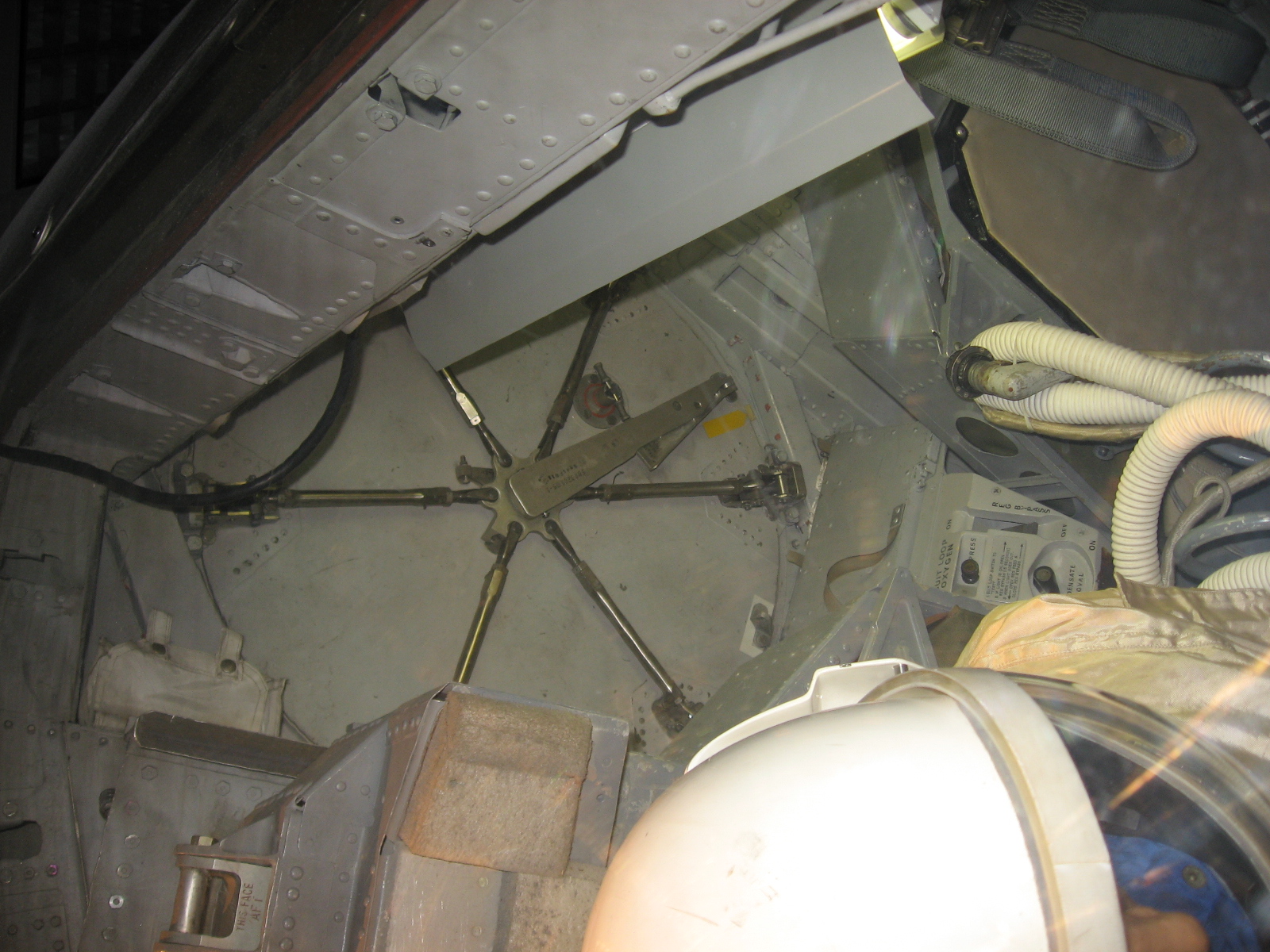 US Air Force stenciling
Add a photo to this gallery

Retrieved from "https://military.wikia.org/wiki/Manned_Orbiting_Laboratory?oldid=4959641"
Community content is available under CC-BY-SA unless otherwise noted.