Marathwada Mukti Sangram Din (Marathwada Liberation Day) is celebrated in Maharashtra on 17 September annually. It marks the anniversary of Marathwada's integration with India when the Indian military, with help of local rebels, annexed the State of Hyderabad, overthrew the Nizam and merged Hyderabad into the Indian Union on 17 September 1948, 13 months after Indian independence.[1][2][3][4]

India gained independence from British on 15 August 1947. After the partition, princely states were given the option to join either India or Pakistan. The Muslim ruler of Hindu majority state of Hyderabad, Osman Ali Khan, decided to remain independent. He also appealed to the United Nations that his princely state, which included current Marathwada and Telangana regions, be granted statehood. This sparked a rebellion in the State. During the revolt Marathwada saw major uprisings against the Razakars of Nizam. The main leaders of the revolt were Swami Ramanand Tirth, Govindbhai Shroff, Vajayantra Kabra and P H Patwardhan. The Indian government appeared anxious to avoid what it termed a "Balkanization" of the new country and was determined to integrate Hyderabad into the newly formed Indian Union.[5] Amidst the unrest the Indian government launched a military operation named Operation Polo which it termed a "police action". The operation itself took five days, in which the Razakars were defeated and Hyderabad was annexed.[6][7][8][9]

The Marathwada Liberation Day is a local holiday in Maharashtra. during the official celebrations the Indian National Flag is hoisted on offices of administration. People gather around the "Marathwada Liberation Day Monument" and pay tribute to the ones who were killed during the struggle for independence. Schools also hold rallies attended by students and teachers. Various seminars are organised to discuss social issues related to the economically backward region of Marathwada. The Governor also comes out to greet the local people on this occasion.[7][8][10][11]

Marathwada, Telangana and 4 districts of Karnataka were part of the former princely Hyderabad state. Since 1948, when Hyderabad annexed, 17 September has been celebrated as "Liberation day" by Maharashtra and Karnataka. However, as of now, the newly formed state Telangana does not celebrate it. Bhartiya Janata Party officials have demanded that Telangana Rashtra Samithi's government in Telangana declare it as "Liberation day" and give it an official status.[12] 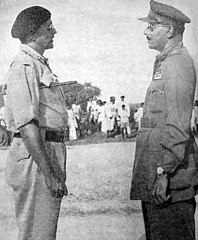 Retrieved from "https://military.wikia.org/wiki/Marathwada_Liberation_Day?oldid=4057309"
Community content is available under CC-BY-SA unless otherwise noted.