Marine One is the call sign of any United States Marine Corps aircraft carrying the President of the United States.[1] It usually denotes a helicopter operated by the HMX-1 "Nighthawks" squadron, either the large VH-3D Sea King or the newer, smaller VH-60N "WhiteHawk". A Marine Corps aircraft carrying the has the call sign Marine Two.

The first use of helicopters for presidential transport was in 1957, when President Dwight D. Eisenhower traveled on a Bell UH-13J Sioux.[2] The President needed a quick way to reach his summer home in Rhode Island, as Air Force One could not land at either the White House or the summer home. Eisenhower instructed his staff to look into alternative modes of transportation and a Sikorsky UH-34 Seahorse helicopter was commissioned.[3] The early aircraft lacked the "creature comforts" found on its modern successors, such as air conditioning and toilets for in-flight use.

In 1958, the H-13 was replaced by the Sikorsky H-34, and in 1961 by the VH-3A. Not long after the mode of presidential transport was introduced, presidential aides asked the Marine Corps to look into the White House South Lawn as a helicopter landing zone.[3] Ample room was present, and the protocol was established.[3]

Until 1976, the Marine Corps shared the responsibility of helicopter transportation for the president with the United States Army. Army helicopters used the call sign Army One while the president was on board. The VH-3D replaced some VH-3As in 1978, and the remaining VH-3As were replaced by the VH-60N beginning in 1987.[4] Improvements were made to both types of helicopters since their introduction to both take advantage of technological developments as well as to meet new mission requirements. However, by about 2001, it was clear that so much extra weight had been added to the helicopters that mission capability was being reduced and few new improvements could be made.[5]

By 2009, there were 11 VH-3Ds and eight VH-60Ns in service as presidential/VIP helicopters.[4] On July 16, 2009, Marine One flew with an all-female crew for the first time. This was also the final flight of Major Jennifer Grieves, who was the first woman pilot to fly the president.[6] As of January 2009, Marine One has not been the subject of any accident or attack.[7] However, in 2006, President George W. Bush attempted to board Marine One with his departing press secretary, and the ignition on Marine One's engines failed. The president was forced to exit the helicopter and depart the White House in an automobile.[8]

The September 11 terrorist attacks on the United States led to widespread agreement that the Marine One helicopter fleet needed significant upgrades to its communication, transportation, and security systems. But these could not be made due to the weight already added to the aircraft.[5]

In April 2002, the Department of Defense (DOD) initiated the VXX program to develop a new presidential/VIP helicopter transportation system. The helicopter program was assigned to the United States Navy. A delivery date of 2011 was set.[9] The White House asked the Secretary of Defense to accelerate the development of the new aircraft in November 2002, and DOD said it would have a new aircraft ready by the end of 2008.[5] To do so, DOD asked companies bidding on the aircraft design to begin development and production at the same time.[9]

Specifications for the new aircraft were kept secret. Industry publications and testimony at congressional briefings revealed, however, that the helicopter was to be 64 feet (20 m) long, carry 14 passengers, be able to carry several thousand pounds of baggage and gear, and have a greater range than the VH-3D or VH-60N. The helicopter's defensive capabilities were to include a radar jamming and deception system to ward off anti-aircraft missiles, and hardening of key electronics against nuclear electromagnetic pulse. It also was to include an encrypted telecommunications system and videoconferencing.[8]

Lockheed Martin and Sikorsky Aircraft competed against one another for the contract. Lockheed partnered with AgustaWestland, a joint British and Italian aircraft company, and offered a version of the AgustaWestland AW101. Sikorsky proposed using its S-92.[10] The Navy awarded the contract to Lockheed Martin in January 2005,[11] to develop and build 28 helicopters.[10] The helicopter was designated VH-71 Kestrel.[5] Five of the initial less-sophisticated VH-71 version were due for delivery in 2010, with 23 of the upgraded version due for delivery in 2015. The goal was to retire all VH-3Ds and VH-60Ns along with the five initial VH-71s at that time, leaving the Marine One fleet with 23 helicopters.[8]

By March 2008, the $6.1 billion cost of the 28 helicopters had skyrocketed to $11.2 billion. Members of Congress were shocked to discover that each VH-71 would cost $400 million—more than a single Air Force One Boeing VC-25 airliner. Lockheed Martin blamed the Navy for the cost overruns, saying that more than 1,900 extra requirements were added to the project after the contract was signed. The Navy said no extra requirements were added. It blamed having to redesign the VH-71 to Navy standards, and an incomplete understanding by the Navy and Lockheed Martin on just how much retrofitting the civilian aircraft would need to meet the White House's specifications.[8]

In June 2009, the VH-71 program was canceled due to these cost overruns.[11] By this time, cost estimates had ballooned to more than $13 billion.[9] The Government Accountability Office issued a report in March 2011 that pointed to three sources for the cost overruns. First, asking for development at the same time as production led to extensive retrofitting of built models. Second, a full-scale review of the system's requirements did not occur until four months after production started. Only then was it discovered that the VH-71's design could not meet the system's needs. Third, DOD and the White House asked for excessive combat and communications capabilities.[9]

Immediately after the program's cancellation, however, the Marine Corps started the program again.[11] This time, instead of development and production running concurrently, the Corps created an Initial Capabilities Document (ICD) which more clearly outlined the aircraft's requirements. DOD approved the ICD in August 2009, naming it the VXX Helicopter Replacement Program.[11] The Navy asked private industry in February 2010 for an Analysis of Alternatives (AOA) to meet the aircraft's mission needs. Among the options the Navy suggested were purchasing a single aircraft, but developing two variations on it. A second option raised by the AOA was to buy two different aircraft—one a "civilian" version with a bathroom, executive suite, and galley, and one a "military" version with complete command and control capabilities. The AOA drew interest from more than two companies, unlike the previous competition. These included Boeing, which told the press that either its CH-47 Chinook or Bell Boeing V-22 Osprey could meet the AOA's requirements. Since the AOA contemplated a much longer development and production process, the Navy said it intended to spend $500 million to keep the VH-3Ds and VH-60s flying.[12] The company also said it could adapt the VH-71, should the Navy and Marine Corps wish to proceed with that as the base aircraft.[13]

DOD waived the requirement that companies develop a prototype on July 10, 2013. The department's analysis showed that the cost of producing a prototype was unlikely to generate any benefits. The department also said that it was proceeding with VXX development using an in-production aircraft with existing, proven systems.[14] A draft request for proposals was released on November 23, 2012.[15]

By August 2013, all interested companies (including Northrop Grumman-AgustaWestland and Bell-Boeing) had withdrawn from the VXX bidding process except Sikorsky Aircraft. Sikorsky had partnered with Lockheed Martin, and said it intended to use its S-92 as the base aircraft.[15] A new deadline of 2020 was established for the 23-helicopter fleet to be in operation.[15] The Washington Business Journal reported on September 9 that the selection of Sikorsky now seemed like a "foregone conclusion".[16]

Marine One is sometimes the preferred alternative to motorcades, which can be expensive and logistically difficult. The controlled environment of a helicopter adds greatly to the safety factor as well. It is also used to transport senior Cabinet staff and foreign dignitaries. The HMX-1 squadron operates a total of 35 helicopters of four different types as of 2009.[17]

More than 800 Marines supervise the operation of the Marine One fleet, which is based in Quantico, Virginia, but is more often seen in action on the South Lawn of the White House or at Joint Base Andrews Naval Air Facility in Maryland. At Andrews, it is sometimes used to connect to Air Force One for longer journeys. Marine One is met on the ground by at least one Marine in full dress uniform (most often two with one acting as an armed guard). According to a story told by Bruce Babbitt, President Clinton, in his final days of office, while flying over and landing in a remote area near the Grand Canyon, found a Marine waiting on the rock ready to salute him.[18] Marine aviators flying Marine One do not wear regular flight suits during flights, but rather the Marine Blue Dress Charlie/Delta uniform.

As a security measure, Marine One always flies in a group with identical helicopters, sometimes as many as five. One helicopter carries the President, while the others serve as decoys. Upon take-off these helicopters begin to shift in formation to obscure the location of the President. This has been referred to as a presidential shell game.[citation needed] Marine One is also equipped with standard military anti-missile countermeasures such as flares to counter heat-seeking missiles and chaff to counter radar-guided missiles, as well as AN/ALQ-144A infrared countermeasures.[19] To add to the security of Marine One, every member of HMX-1 is required to pass a Yankee White background check before touching any of the helicopters used for presidential travel.[20]

Marine One is transported (as is the president's limousine) wherever the president travels, within the U.S. as well as overseas.[17] At a presidential inauguration, the Marines offer a flight to the outgoing president from the Capitol to Andrews Air Force Base. 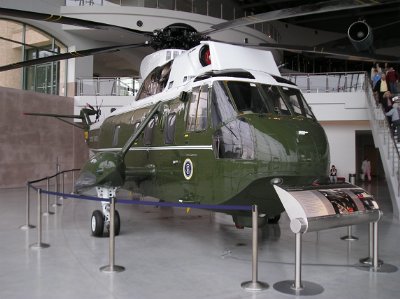 A former Marine One at the Ronald Reagan Presidential Library

VH-60N over Washington, DC
Add a photo to this gallery

Retrieved from "https://military.wikia.org/wiki/Marine_One?oldid=4382344"
Community content is available under CC-BY-SA unless otherwise noted.